The recent blunders of Kiran Bedi 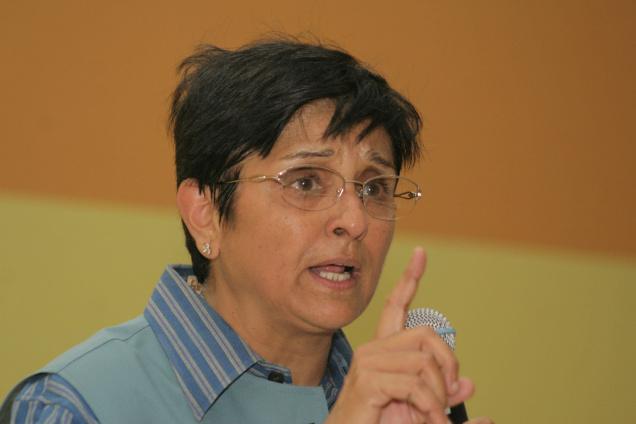 Alas this Saviour of BJP, committed some Faux Pas just days after her joining into BJP

1. Response to Kejriwal’s call for a debate

.@thekiranbedi congrats 4 being nominated as BJP’s CM candidate. I invite u 4 a public debate moderated by neutral person n telecast by all

With this tweet Kejriwal played his first move. Asking Bedi for a debate. Bedi panicked, probably because she realised Kejriwal is a more experienced player in the game of Public Shaming, and gave this rather lame response:

“I accept his challenge. I’ll take him on a debate on the floor of the house. He believes in debate and I believe in delivery. I’m here for good governance,”

This was like giving AB De’villiers a Fulltoss. Expectedly Kejriwal whacked her out of the park with his responses:

Kiran ji saying she wud debate after elections in assembly. She refuses to debate before elections saying she believes in delivery(1/2)

Does it mean delivery before elections, debate after elections? We want debate before and delivery later(2/2)

Why kiran ji running away from debate? She is busy but surely she can take out 2 hrs from busy schedule. Ppl want 2 know her stand on issues

While Kiran Bedi was given a front row invite for the Republic Day Parade, Former CM Arvind Kejriwal wasn’t even invited! Social Media went abuzz with allegations that The Government has been partial to people from its own party and biased against opposition. And as if to add fuel to the fire, Kiran Bedi responded to questions on this issue by saying:

“If Kejriwal is hurt for not being invited, he should join the BJP”

This was a true self goal. Going by her statement, any one will be compelled to conclude that BJP party members were given preference in the invitation process, and that Republic Day Parade was reduced to being a party event rather than a national event. It was an absurd comment from a CM nominee exposing her own party at the time of elections.

Lets be clear, Ravish Kumar has an ideological bent which is anti-BJP, to the say the least. This should be obvious to any one following his work. Given that Bedi is still a Political newbie, why did she have to say yes to Ravish? Why give an interview to a person who will come with an agenda and make sure you are crucified, by hook or by crook. Especially when its a seasoned journalist vs a newcomer. We all know the aftermath, how it was sensationalized, and how lies were used.

Its again on NDTV that Kiran Bedi made a blunder, which till now hasn’t got much attention. An audience member asked her a question:

“RSS chief Mohan Bhagwat made a statement that ‘Women should stick to household chores, and be bound by the social contract’, do you support this?”

What Bedi said: “These are personal opinions ”

What Bedi should have said: “MOHAN BHAGWAT NEVER SAID THAT”

Yup, this Neswlaundry report makes it clear as day-light that Bhagwat never said anything like that. And since Bedi has been just recently inducted into BJP, she might not have been aware of this. The BJP media cell has to brush her up with at-least the basic facts so that she can put them up instead of giving foolish responses on “tough” questions.