More
Home Opinions The anatomy of a farce; the Odd Even plan of Delhi
Opinions
Updated: 20 April, 2016

The anatomy of a farce; the Odd Even plan of Delhi

A man suffering from severe cold and sore throat went to a doctor. The doctor had a hard look at him, checked his vitals and prescribed a ten day course of medicines, some tests to eliminate suspicions related to other complications, asked him to stay away from spicy, oily food; especially the one which is difficult to digest, stay away from alcohol & smoking, avoid crowded places and take it easy. The doctor also advised him to avoid getting wet, for a few days, if possible.

The longish list of advice & prescription set the man thinking. The tests & medicines would cost more than Rs. 3500 or as much as two bottles of scotch & he was scared at the thought of spending so much hard earned money on some stupid medicines. A friend who was famous for his bar-be-que and a beautiful wife had planned a party that evening itself. Another event, a picnic with activities like camping, river rafting and bonfire was planned by his company during the coming weekend which he could not miss.  About the smoking, well, he too wanted to quit and had been trying for last ten years, unsuccessfully.

Faced with such odds, the man decided to take the doctor’s advice in a phased manner. He would work on one advice in phase one and later, when circumstances permitted, keep on adding more.

In the first phase, he decided that he would not take bath for next 15 days. Depending upon the results of this trial, he would decide to continue it or add further components of the prescription or advice.

Well, he did just that. He stopped taking bath, from that day onwards. But he continued going to parties, drank to his heart’s content, ate anything his taste buds found liked, danced away to glory and off course did not discontinue smoking. In fact, fortified by the thought that his no bath policy could not only cure him but probably give him immunity from common cold or flu, his indulgence increased in severity.

After a week he tweeted, “The no bath policy implemented successfully. Saves environment, saves time in the morning. Happy to play my role in saving the earth.”  He also got few hundred retweets too from kids who were scared of the wet, cold showers.

Same week, his wife left him due to the stink he was having around him.

He tweeted again, “Phenomenal success of No Bath policy. Saving environment, saving time, saving cost of living. Proud to be a NoBath-ian.”

The relevant part of story ends here. What happened to him; whether his condition improved (a common flu can get cured in a week) or worsened or he died of pneumonia, whether his wife came back or he was excommunicated from society due to stink is not relevant to the issue at hand.

The man would be remembered for conceptualization and successful implementation of the ‘No Bath Policy’ even if he died as he ignored the crucial part of the medical prescription.

Because this is exactly how the Odd Even formulae for Delhi was envisaged, planned, implemented, promoted and finally gloated upon.

The problem was pollution; with the major contributors, in descending order of contribution being dust, either 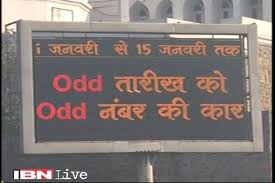 Delhi government chose to attack the factor which contributed less than 5% of total pollution, much like the imaginary man above chose the easy option of not taking bath.

What the Delhi government faced was a problem that needed an integrated plan, including detailed studies on road design & space allocation for public transport & private vehicles, integrated traffic plans incorporating Metro, BRTS, road transport & last mile connectivity, detailed discussions with stake holders, huge resources in terms of finances and people, lot of hard work in creating an executable plan with a credible communication strategy to take people on board, coordination with other agencies including central government, neighbouring states, local municipal bodies and finally, political will to implement few unpopular initiatives.

When going gets tough, the tough appear on television.

In the face of such insurmountable challenges, Delhi government acted decisively and chose to let the public do the hard work, make sacrifices & spend money while it went happily to TV instead, as usual, like the imaginary man above, who chose to go to the parties so that he could eat, drink and dance to his heart’s content instead of taking medicines & staying in bed.

And the car owning male in Delhi became the new minority, with no rights whatsoever.

He could not use his car as it is one of his ‘men’s those days’, he could not travel with his wife as her exemption would vanish due to his presence, he was treated as an imposter in public transport, like a new prisoner in a jail, he was fleeced by autos, paid surge pricing on Ola & Uber and royally ignored by the government.

And the success of the plan was declared on day one!

Since the pollution did not come down, it was not even planned for or expected to, the success was measured instead on adherence to the odd even plan.

Assume your wife beats you; occasionally, frequently or at least with a certain specific frequency. Now you make a plan to change that. The plan goes like this; every time your wife beats you, you would think about your imaginary girlfriend, just to spite her, even if only in your own thoughts.

Now if you measure success of your plan on ratio of number of times you thought about your girlfriend to number of times your wife beat you, you would find an achievement of over 100%. Off course, the beatings do not come down, like pollution in Delhi.

In the bargain, the gains for Delhi were temporary, the loss irrecoverable.

Many people got affected by the plan.

Road users (exempted) had pleasant rides or drives as travelling times got reduced, public transport regulars cribbed about the new specie (male car owner of Delhi) encroaching their constricted space,  Kejriwal gained visibility, he (or his back) was on air or television almost every two minutes, media gained advertisements worth crores of rupess from the Rs 526 crore war-chest, the agency handling Delhi govt advertisement budget got its hefty commissions (and possibly rumoured kickbacks too), Aam Aadmi Party members gained temporary employment for offering rosebuds to road users, auto & taxi operators earned lot of moolah by doing almost double the rides.

It was a unique, rare situation where Courts were strict, public was primed for harsh measures, government had the political strength, media was supportive. If the government wanted, it could have done wonders.

But government chose a farce instead of governance.

Serum Institute had offered GOI a discount for 1st 100 million doses, it will not be making huge profits from states as alleged
News Reports

After central government slammed media for spreading falsehoods about oxygen exports, Moneycontrol takes down its report

India becomes the fastest country in the world to administer over 13 crore COVID-19 vaccine doses: Centre

The incident occurred at Dr Zakir Hussain Hospital in Nashik.

No masks, abuses and ruckus: How a Shiv Sena corporator abuses power to threaten doctors on duty

The doctors of Bhagwati Hospital have threatened to resign after being humiliated by the Shiv Sena corporator.
Read more
News Reports

With the COVID-19 pandemic, journalists have screamed "Beware of the Ides of March" to anyone who would listen - Barkha Dutt for example.
Read more
News Reports

IIT Kanpur Professor predicts COVID-19 to peak in May, dismisses claims of Kumbh and poll rallies being responsible for spread

The IIT Kanpur professor said that since the election rallies and the Kumbh are held in open spaces, there are few chances of it spreading the COVID virus
Read more
Opinions

Comedian Rohan Joshi tells Bhakts, "I have nothing but contempt for them and nit a shred of empathy" as he mocks Coronavirus deaths
Read more
- Advertisement -

As ICMR study proves high efficacy of made in India Covid vaccines, read how politicians and media had stoked vaccine hesitancy against Covaxin

India becomes the fastest country in the world to administer over 13 crore COVID-19 vaccine doses: Centre

Netflix stock dips due to a dramatic slowdown in subscriber addition, company blames production delays due to Covid-19