OROP : Let’s politicise everything and let the people decide

I mean this seriously, not sarcastically. India is a democracy. There is nothing wrong with “politicisation”. Why do we treat “politicisation” like it’s a bad word? In fact, in the absence of politicisation, we basically have oligarchy: rule of the few. Which is what we have right now. Be it national security, be it the judiciary or be it the media, what we need is more politicisation, not less. Politicisation brings the dirty linen out in the open. They say sunlight is the best disinfectant. Otherwise, it is too convenient for the powerful to hide skeletons in the cupboard.

Let’s be clear : the surgical strikes were due to Modi’s ability to make a daring decision. A decision that none of his predecessors in the last few decades thought was possible. Our military was always this brave and capable; it was Narendra Modi who believed in them and inspired the nation to believe in them. I didn’t think it was possible for the Indian military to conduct surgical strikes across the LoC. I got a pleasant surprise. We all did. That makes Narendra Modi the legitimate “Avenger of Uri”. We need more posters like this, not less. 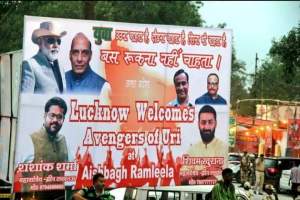 What we need less of is nonsense like this:

No no no no! BJP should have more posters on this and leaders should highlight it courageously in rallies. National security is a political issue. Either you are able to defend the nation or you are not. For example, Nehru was an incompetent leader who disabled the Indian Army, leading to the humiliation of 1962. The reason behind this is Nehru’s delusions of statesmanship and ideologically induced blindness to cold reality. Here is Nehru in 1947:

If the above is true, please do not ask me what Nehru was smoking. The foremost visionary of the 20th century could foresee “no military threats” to India and decided to actually disband the defence forces. Perhaps even the “competent astrologer” that Nehru consulted in 1944 to get a “proper horoscope” of Rajiv Gandhi could have done a better job of foreseeing the future.

Yeah, so national security is very much a political issue. Here is the official address of Vice President Biden at the Democratic National Convention in 2012, striking a hammer blow for the Obama-Biden campaign:

Obama killed bin Laden. Obama avenged 9/11. It’s about giving credit where it is due.

And now, onto OROP. Indira Gandhi stole it, Sonia Gandhi lied about it and Modi is being crucified for giving it. Which is probably why Rahul Gandhi is laughing about it.

But I don’t mind. No really, go ahead Rahul and politicise. This is your chance. Politicise this to the hilt. Let both sides politicise. We lay it all before the people. We tell the people who is supporting SIMI, Lashkar, Pakistani Army and JNU Naxals. You can do your stand up comedy routine on OROP like you are doing here. Let the people decide. It’s really a good thing. It’s all fully politicised and I am glad it is. People will decide. And I am fairly sure what their decision is gonna be. If Rahul thinks that his OROP drama will have 1% of the impact of the surgical strikes, his foresight is about as good as that of his great grandfather Chacha Nehru.

This is why I call Modi the great facilitator. Before, there were all these things that were supposed to be “above politics”. In real terms, this meant that the discourse in these spheres was dominated by an inbred and exclusive elite. Foreign policy and national security were dominated by slothful “intellectuals”. Hey intellectuals…some tremendous foresight from you all betting on the Non-Aligned Movement  and on the survival of Soviet Russia. We will forever remain in awe of your great genius. And thanks a lot for  joining the Muslim nations of the world in boycotting Israel until 1992, a favour which the Muslim nations returned by supporting Pakistan in Kashmir. Really, thanks a lot!

The arrival of Modi sent an electric shock through the elite. They were forced to tear away their masks and join in the noisy discourse. The judiciary had to bring its political loyalties out in the open. Let the nation see which high ranking officials are arrogant and irresponsible enough to refuse a meeting with India’s Prime Minister because they are too busy in a family function. We got them all on the streets…the so called poets and writers, the recipients of Padma this and Padma that …and the journalists and intellectuals all on the streets. The so called journalists had to give up all pretence of neutrality and hit the road. They had to bare it all.  Come out on the streets, stand with your party flag and say whatever. The dalali behind closed doors stops here, once and for all. So, please please politicise! Let the people in. Let the people know!

Monsoon session of Lok Sabha concludes, becomes the most productive session in the history with productivity rate of 167%

September 20 was the most productive day of the current session 17th Lok Sabha with 234 per cent of productivity.
Read more
News Reports

Rana Ayyub lies again, this time while writing an ode to the old lady protestor at Shaheen Bagh for Time’s 100 most influential people...

Rana has written that Shaheen Bagh protestor 'Bilkis' was sitting to protest against the CAA that could "block Muslims from citizenship".
Read more

Deepika’s name had emerged in the drug abuse probe earlier this week after her WhatsApp conversations went viral.

BJP government needs to watch out about what comes next. The so called “age of controls” may be over, but the mentality of that era might not be.

Supreme Court advocate and author Monika Arora has stated that William Dalrymple has violated visa norms by trying to interfere in India's democratic process and trample on her freedom of expression.

One of the main things is that you need to be seen at Karan Johar's parties, KWAN representative had told Suchitra Krishnamoorthi
Read more
News Reports

Interestingly, until now, all the big Bollywood names which have emerged in the NCB's probe have links with KWAN Agency
Read more
News Reports

Mumbai Police made actress Payal Ghosh wait till 2 AM, did not file sexual assault complaint against Anurag Kashyap: Reports

The BMC declared her society a containment zone to prevent the actress from filing a complaint.
Read more
News Reports

Casting director of Rhea Chakraborty’s debut film ‘Jalebi’ among 10 Bollywood personalities to have died in the past few months. Read the details here

A post containing the list of recent deaths of Bollywood celebs and the alleged reasons behind their deaths is being widely shared.
Read more

Monsoon session of Lok Sabha concludes, becomes the most productive session in the history with productivity rate of 167%

September 20 was the most productive day of the current session 17th Lok Sabha with 234 per cent of productivity.
Read more
News Reports

Minister of State for Railways Suresh Angadi succumbs to Coronavirus

Minister of State for Railways Suresh Angadi passed away at the AIIMS in New Delhi, he had tested positive for Coronavirys on 11 Septemter
Read more
News Reports

Even in a cosmopolitan city such as Mumbai, bigoted homeowners actively discriminate between tenants.
Read more
News Reports

One of the main things is that you need to be seen at Karan Johar's parties, KWAN representative had told Suchitra Krishnamoorthi
Read more
News Reports

Pakistan plans to turn illegally occupied Gilgit-Baltistan into a province; the decision to benefit China and CPEC

Rana Ayyub lies again, this time while writing an ode to the old lady protestor at Shaheen Bagh for Time’s 100 most influential people...

Rana has written that Shaheen Bagh protestor 'Bilkis' was sitting to protest against the CAA that could "block Muslims from citizenship".
Read more
News Reports

China has reportedly constructed multiple buildings in the Humla region of Nepal and the Chinese troops are staying in them.
Read more
News Reports