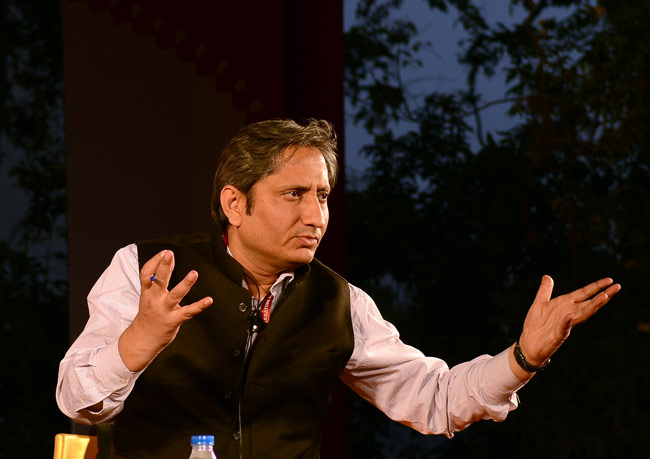 Ravish Kumar, the NDTV India anchor, who claims to be the gold-standard in reporting, has landed in yet another controversy. In a bid to show how the demonetisation scheme was hurting businessmen, Ravish Kumar tried to pull off a fast one, but was caught in the act.

In his show he introduced an Ajay Arora as the head of Traders Association of Delhi, all the while forgetting to mention his Congress background. All this came to light via this expose

The video starts with Ravish in a bid to maintain his neutral image defended the demonetisation scheme from some disgruntled men. As the video progressed a crowd gathered around Ravish which very vocally starts supporting Modi and his demonetisation scheme. Suddenly the scene cuts to a terrace where Ravish was found standing with a mere 5-7 people. He explained the reason behind the location change was to get away from all the ‘Bheed-bhaad’. Incidentally in the opening scene of the video Ravish was heard commenting about how the area lacked it’s usual hustle and bustle.

Ravish then introduced Ajay Arora as the head of the Traders Association of Delhi. Arora then proceeded to bash the government’s scheme with a vengeance, by lamenting about the immense hardships he and other traders are facing, the men accompanying him also echoed his viewpoint.

The whole report was called into question when Tajinder Bagga searched the facebook profile of the eminent trader association head, Ajay Arora and found him to be the convener of All Delhi Traders Congress and in one of his photos was seen sharing the stage with Delhi congress chief Ajay Maken.

After a bit of digging we managed to find some Facebook posts which might cement Arora’s congress links. The first one shows Arora standing next to Ajay Maken during some fogging program and the second one shows him being part of Trader’s Congress’s “vasooli diwas” accompanied with people who were wearing Congress party’s Gandhi topis. These Facebook posts also might clear the air that the Congress in All Delhi Traders Congress refers to the Political party and is not a synonym to an ‘Association’.

All of the above facts were probably missed by Ravish Kumar during his research.

This is not the first time Ravish has been caught of misreporting facts, OpIndia.com had earlier reported how Ravish Kumar in his blog ‘I am not a super journalist’ twice distorted facts to discredit Kiran Bedi.