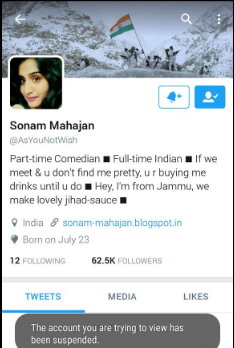 On 10th February, we had reported how popular Right Wing voice Sonam Mahajan, found her twitter account suspended. The account was influential on the micro-blogging site and had over 62,000 followers accumulated over many years, all of which were nullified by one suspension by twitter. This suspension was preceded by a series of such incidents occurring mostly with Right Wing accounts.

Sonam Mahajan, who also has a Facebook page, had claimed that she knew such a fate was inevitable after she had been routinely asking uncomfortable questions to Kejriwal and that the suspension was at the personal behest of Kejriwal, who was assisted in this regard by Raheel Khursheed a top executive at Twitter India.

She had also claimed that the suspension closely followed her tweet about Dangal actress Zaria Wasim’s mother who had posted a “Keep calm and defeat India” poster with a Pakistani flag on Facebook. Sonam Mahajan had gathered support from a vast range of social media users, including some celebrities like Raveena Tandon, Madhur Bhandarkar and also head of ZEE News, Dr Subhash Chandra.

To counter this unilateral ban by Twitter, Sonam Mahajan had then started a new handle named “@iSonamMahajan” on Twitter. Within 24 hours of starting this account, an ordinary Indian like Sonam had managed to recoup over 10,000 of her followers. Once again social media users were aghast at this blatant censorship by Twitter of voices it does not want to hear:

One user seemed to have warned Sonam of such an eventuality:

Hi @iSonamMahajan
Be careful with @Twitter
They are planning to suspend you under plagiarizing your old account.

Within minutes of the suspension, an account named “The Bhakt Slayer” came up to claim responsibility for this attack:

We reported severe abusive 10K+ #Bhaktin account @iSonamMahajan and got it suspended. Beware abusers we are watching you. pic.twitter.com/VKUU4he0oB

If it has become so easy for targeted suspensions of users following a particular ideology on flimsy and non-existent grounds, can Twitter truly claim to be in support of Free Speech?