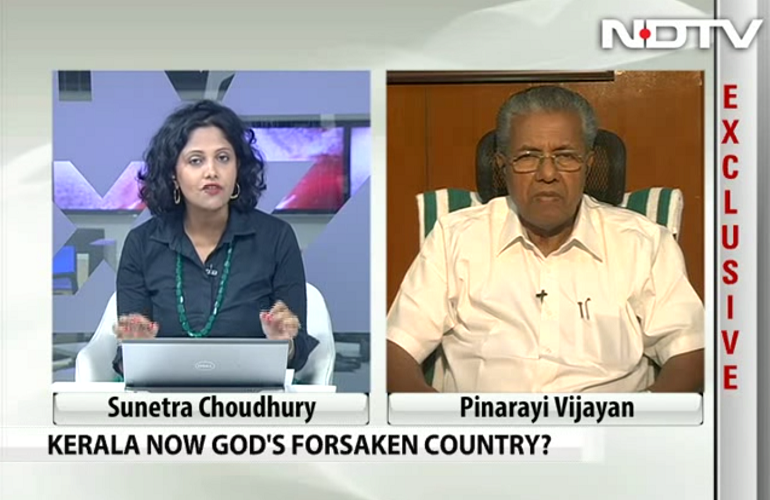 “For the past few weeks, the political violence in Kerala resulting in killings of RSS workers and also CPM workers has become a major national story … Kerala government has said it is just propaganda, but how do they explain the violence and the fact that even Congress is now protesting in the state? Well, to take all these questions we have with us Chief Minister Pinarayi Vijayan speaking for the very first time on this issue. Sir, thanks very much for speaking to NDTV”

These are the words of NDTV anchor Sunetra Choudhury on Aug 7, 2017 as she began speaking to the Kerala Chief Minister.

Any reasonable viewer would have assumed that this is a typical exchange between a politician and a journalist.

What happened next is rather comical. As Sunetra Chowdhury poses each “question”, Chief Minister Pinarayi Vijayan waits, then raises his eyebrows, looks down on something before him and then appears to read out prepared responses right on air!

For the convenience of readers, some twitter users have shared  a compilation of glimpses from the video showing the Chief Minister reading out his responses to NDTV’s “questions”:

Kerala CM Pinarayi Vijayan was reading every answer to the questioned asked by NDTV journo @sunetrac .
Was questions leaked to him by NDTV ? pic.twitter.com/EX14XLhOiO

The first possibility is that NDTV handed prepared questions to CM Vijayan in advance so that he could prepare written responses. In that case, would it not have been fair for Sunetra Choudhury to have made this disclosure to her viewers?

Should the viewer not have been warned that what s/he is witnessing is not an exchange between a politician and a journalist, but rather two actors performing from a prepared script? That NDTV is not broadcasting news but showing “news theater”?

But then, a reasonable viewer would never have expected NDTV to be anything but news theater.

The second possibility is even more distressing. Did the Kerala government or the Communist Party of India (Marxist) prepare the questions and hand them to NDTV to be asked on air? This is especially chilling because of the context of political killings. This kind of act would bring to mind sinister visions of Communist Commissars reading out the “party line” to party mouthpieces regarding the elimination of dissenters.

We would like to know explicitly if NDTV aspires to be (or already is) the Indian version of China’s Global Times “newspaper”. Actually, you know what, don’t answer that!