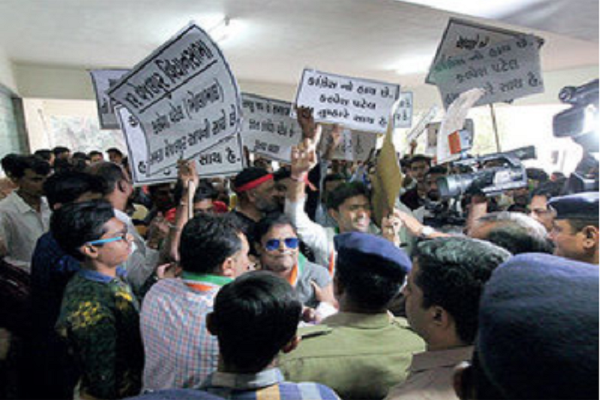 The Gujarat Congress workers on Sunday staged angry protests in various party offices in the after they were angered by the ticket distribution for the upcoming assembly elections.

Reportedly dissatisfied with the third candidate list with 76 nominations, the party workers proceeded to vandalise the party head office in Gandhinagar on Sunday night:

Apart from destroying party property, the angry workers even burnt an effigy outside the office. The main point of anger among the party workers seems to be about the party providing Arvind Singh Chauhan a ticket from Amraiwadi seat in Ahmedabad.

Apart from Gandhinagar, protests were also seen in the district of Banaskantha. The Congress in order to possibly avoid such a dissent, had called up 14 of its nominees about their selection. The news spread nonetheless and protests broke out.

It would seem like the situation of the Congress party in the state seems to be reaching comic levels.

Earlier we had reported how party vice-president Rahul Gandhi had to deal with pro-Modi slogans while visiting a textile market in Surat. Here he was welcomed with chants of ‘Modi, Modi’ and ‘Bharat Mata Ki Jai’.

Apart from this, reports surfaced, which claimed that the Gujarat Congress is collapsing like badly stacked cycles in a cycle stand. Such an assertion was made after major disagreements were seen cropping up between Congress and Patidar Ananamat Andolan Samiti (PAAS) leaders.

If all this wasn’t enough, the twitter account of a Youth Congress magazine came up with an elitist meme which targeted the humble tea seller background of Prime Minister Narendra Modi. A day after that, BJP Gujarat MLA Harsh Sanghvi and BJP Delhi spokesperson Tajinder Bagga reached Congress office in Surat in order to mark their protest by starting to offer tea in front of it.