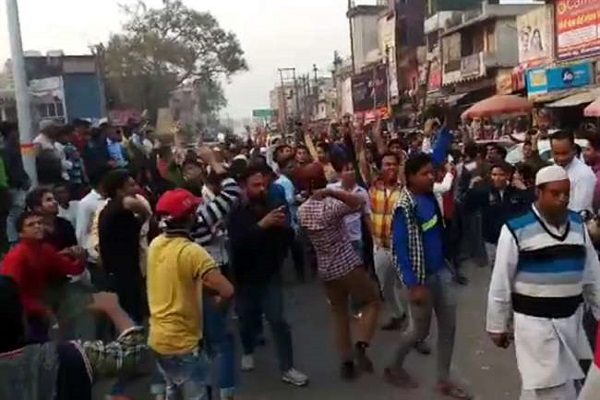 A case against 150 unidentified people have been registered after a viral video showed them shouting “Pakistan Zindabad” slogans during an election victory procession. The procession was being taken out by Bahujan Samaj Party (BSP) supporters on Friday in Bulandshahar district of Uttar Pradesh after a candidate Bubbo Parveen was declared victorious in local body polls.

Parveen was supported by the BSP and the victory procession was being taken out by the party supporters, where leaders of the party too were reportedly present. A video uploaded on YouTube by Amar Ujala newspaper shows “Pakistan Zindabad” slogans being shouted during the procession:

The above video is reported to have gone viral in the region in the past couple of days, leading to tensions. Once the video went viral leading to the police case, BSP is denying that its supporters raised the slogans. District head of the party has raised questions over authenticity of the video itself.

Police has not said anything about authenticity of the video, but a Dainik Jagran report today claims that two people have even been arrested in this case.

Reports claim that the victory procession itself was taken out without permission from local administration. The cases have been registered for violating model code of conduct and under section 153-B of IPC, which punishes spoken or written words that are prejudicial to national integration.

BSP is reported to have done comparatively well in the Muslim dominated areas in the Western Uttar Pradesh in the recently concluded local bodies polls, leading to resurgence of the party in the state, though some analysts believe that any such conclusion is not based on ground realities.