Social media is a great leveler. Many childhood heroes of lakhs of Indians, have turned out to be utter failures today. Former quiz master turned full-time sycophant of Mamata Bannerjee Derek O’Brien is one prime example. Unfortunately, there are more such luminaries.

Famous scriptwriter and poet, Javed Akhtar recently spoke at a Ted talks event, on the topic: The Gift of Words. It seemed apt that a man whose beautiful lyrics and slam-dunk scripts have enthralled generations would speak on this topic. He does have a command and mastery over words.

He made many profound statements in his speech at the aforesaid event:

“A man is known by the company he keeps, and similarly words”

“The more words you have, the more clearly you can think”

All his statements make perfect sense. But then you read tweets by a verified Twitter account by the name of Javed Akhtar. You see the words being used from that account and you wonder: Is this the same man who expounds the importance of words, and how they truly reflect what kind of person one is?

Earlier this year, the master of words Javed Akhtar had called Gold medal winning athletes as “hardly literate” persons. Just because they seemingly differed from his world view on an issue.  The same Javed Akhtar has been slammed on social media time and again for his blatant shows of hypocrisy (1)(2). More recently he was exposed on social media, as he tried to defend Triple Talaq by bringing in false equivalence.

Today, one got to see even more wisdom from the same account: 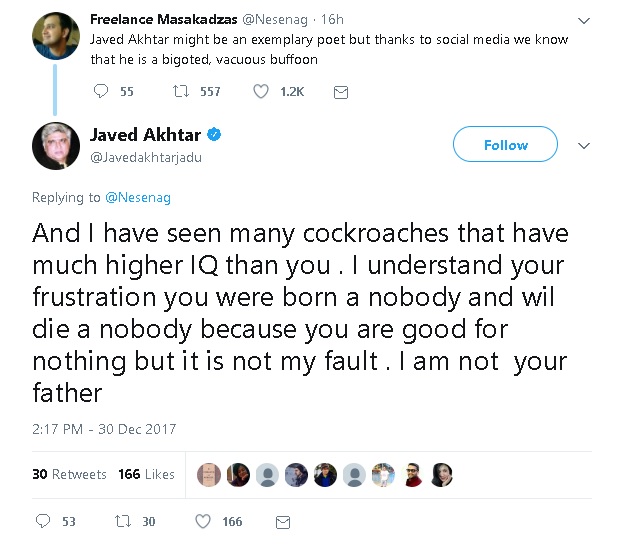 An average social media user, expressed his disappointment at Javed Akhtar’s aforesaid unraveling via social media. And in return he got more of what had disappointed him. A vile attack by the man who extols the power of words. Is this how a public personality ought to react to criticism? Is this how a responsible celebrity should treat an ordinary citizen?

Not only was the language crude, but it also smacked of arrogance and over-confidence. A certain swagger, of a successful personality, looking down upon the petty masses, the same petty masses, who through their love and adulation, have made the star what he is today.

Not much needs to be said to Javed Akhtar at this point, just that he should practice what he preaches. Learn to use words more judiciously, because words have great power and because, what you said is true, and applies to all of us, including you:

“A man is known by the company he keeps, and similarly words”

“The more words you have, the more clearly you can think”