More
Home Opinions Mr Prannoy Roy, with your confused letter, are you indirectly asking the PM to...
Opinions
Updated: 18 February, 2018

Mr Prannoy Roy, with your confused letter, are you indirectly asking the PM to intervene and subvert the legal process? 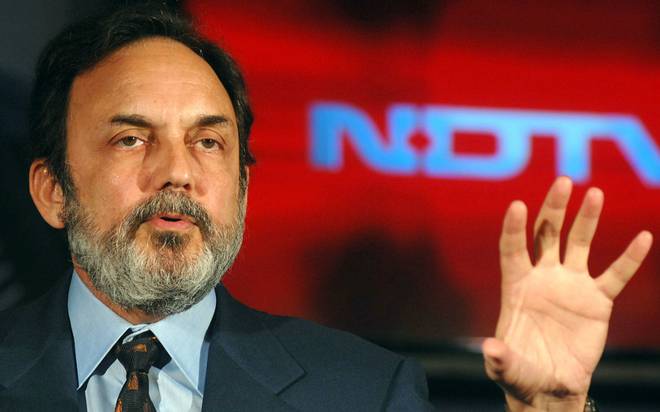 Yesterday, NDTV put out a letter written by its founder Prannoy Roy, to the Prime Minister of India, Mr Narendra Modi. This letter comes on the back of an interesting few months for NDTV and its founder Roy.

In June 2017, CBI raided the residence of Roy in connection with a case against Roy, his wife Radhika Roy, a private company and others for allegedly defrauding a private bank. The case is about the diversion of funds for private use. Within a few months, the BSE asked a clarification from NDTV with regards the same loan. At that point too, Roy and media houses had made a hullabaloo over the law finally catching up. Even left-leaning media persons had condemned this move as hiding “behind the shield of press freedom ”

Meanwhile, NDTV too was in a soup for tax fraud. In October 2017, in connection with a case where as per the IT Department, Rs 1600 crore of concealed income was involved, the IT Department provisionally attached the entire shareholding of RRPR Holding Private Limited (RRPR), in NDTV. RRPR is one of the promoters of NTDV the media house. RRPR is in turn owned by Prannoy and Radhika Roy. Earlier this month, the IT Department slapped a fine of Rs 436.80 on NDTV.

Roy’s latest letter has to be read in the above context, wherein different enforcement authorities are now encircling both NDTV and its promoters for a string of violations. The important point to be noted here is, all actions are being taken by departments and authorities. But, Roy’s letter trains its guns on Dr Subramanian Swamy.

Roy first claims that Swamy’s “barrage of letters” is a “litany of falsehoods” which are aimed at “muzzling and silencing NDTV”. The second paragraph is the most revealing where Roy loses all semblance of logic:

He starts off by saying that Swamy has ensured that big companies are being accused of fraud. And his second sentence says: “These outrageous accusations are being made by India’s ED and IT Department”. Which is it Mr Roy? Do you have a problem with Swamy’s allegations? Or do you have a problem with legal recourse being taken by ED and IT Department? Legal recourse, which you have foolishly labelled as “accusations”?

In a latter paragraph, Roy claims that officers of ED and the IT Department are under pressure from Swamy. This of course ignores the fact that some of the work these bodies did was in pre-NDA era. He then says that such “false accusations” against big companies from the US will negatively impact the sentiment of investors and thus, FDI in India. Towards the end, the letter says:

At this point, the true purposes of the letter are clear:

1. Roy is completely overwhelmed by all the legal action being taken against him and his company, by legal means. He perhaps has exhausted all legal recourse, hence is using this letter as a hail mary

2. Earlier, Roy hid behind the veil of “freedom of press”, now Roy is using the burqa of “FDI and Investor sentiments”, to somehow reduce the legal stranglehold over his dubious deals

3. The letter, in effect, is an extra-legal, public appeal to a politician to intervene in legal matters and subvert the due course of law.

4. Are we expected to believe this open letter is the first attempt by NDTV? It cannot be ruled that NDTV has privately made several attempts to save its skin and now finally they have gone public.

5. The last paragraph indicates the trigger because of which Roy has written this letter: he probably expects that courts will summon his investors Mr Immelt and Mr Zucker, which will no doubt put Roy in an extremely uncomfortable position.

All the above motives are completely against propriety. If the tables had turned, NDTV would be the first to cry out loud that the judicial process is being subverted. Imagine a person like Adani, writing a letter to the PM, asking him to intervene in some legal matter, which he claims is a figment of imagination of some leftist media portals. Adani can very well claim that his international partners are unhappy with these “outrageous accusations”. Will Roy side with him them? Will Roy extend the same courtesies to Adani, which Roy is expecting now? Is this not purely interference in the legal process?

Secondly, if Roy is so clean, if NDTV is so devoid of fraud, why is he afraid of a few letters by Dr Swamy? Why havent NDTV and Roy sued Dr Swamy for defamation? Why are they running to the PM for aid?

Thirdly, again if Roy truly believes these “accusations” are “outrageous”, why does he not fight out the legal battle in the courts. By his own admission some of the cases are in the higher court, and if NDTV is so clean, then Roy should win the battle here and come out shining like a diamond. Or is he alluding that even the courts are under pressure of Dr Swamy?

Lastly, why is he so afraid of Mr Immelt and Zucker being called to courts in India, a fear which seems apparent from his letter? Does he fear they will reveal something which will further land him in a bigger soup? Or are these two people part of another “shield” he is trying? It is indeed amusing that NDTV has developed this sudden love for FDI and investor’s sentiments. One wonders where this feeling was when NDTV went to the NGT to stall Sagarmala? What grounds did a media house have to act as an NGO to block development work worth thousands of crores, involving FDI? After backlash NDTV had to withdraw this application.

This letter smells rotten at multiple levels. Firstly it baselessly alleges that the ED, CBI and IT Department are all working under pressure of Dr Swamy, thus have acted in an illegal manner. The letter then indirectly urges the PM to step in and subvert legal processes. The letter also makes it clear that Roy is either trying to shield two of his investors or trying to protect himself from trouble arising from their disclosures or is using them as a shield.

If any other corporate house had made such a plea to the Modi Government, NDTV would be all over it like a rash. Jibes of “suit boot ki sarkar” would come up. Debates would be held as to how big buddies of Modi are having it easy. Why then NDTV now want the same preferential, illegal treatment for itself?

The possible answer to this question could be: A storm is coming. If Roy has seen the Iceberg coming to sink him and NDTV, he may have chosen to sink claiming that “press was muzzled” by political pressure rather than the people knowing the truth. Only time will tell, but this letter reveals far too much and it is all rotten.