Nirmala Sitharaman, the Defense Minister of India, took to Twitter today issuing a clarification to the defence personnel’s irked over a message printed on Indian Railway tickets.

There’s been some discussion on a message printed on railway tickets. Note the last line:“It is reiterated that this message is being printed for all railway passengers and not confined to defence personnel.” @KSBSectt @DefenceMinIndia @PIB_India @PIBHindi @adgpi @SpokespersonMoD pic.twitter.com/XG86wXmeiK

Yesterday, a retired navy officer, Vikram Waman Karve, fairly active on Twitter since 2014, wrote to the PMO attaching the press clipping with letter from a retired Lt. Colonel, which was further retweeted by Satish Bahri, projecting his discontentment over a message imprinted on Railway tickets which reads, ‘are you aware that 43% of your fare is borne by common citizens of the country’.

Being of the opinion that this message was only imprinted on the tickets handed out to defence personnel, the Lt. Colonel who’s letter was attached by Karve in his tweet to the PMO, took offence saying that these messages were meant to undermine the sacrifices made by the armed forces of the country.

Amazing should we also throw in the face of our country men what the AFs do for our countrymen? I guess we are too polite & so taken for granted ⁦@PiyushGoyal⁩ ⁦@nsitharaman⁩ ⁦@PMOIndia⁩ pic.twitter.com/twBMnNmXqy

The Defense Minister, in her tweet, attached a letter written by Neeraj Sharma, who is the executive director, passenger marketing, Indian Railways, addressed to Rajiv Singh Thakur, the Joint Secretary (Army), which clearly mentions that the message on the tickets were imprinted with a clear intention to impart information to all passengers and not to hurt any individual or service in particular. 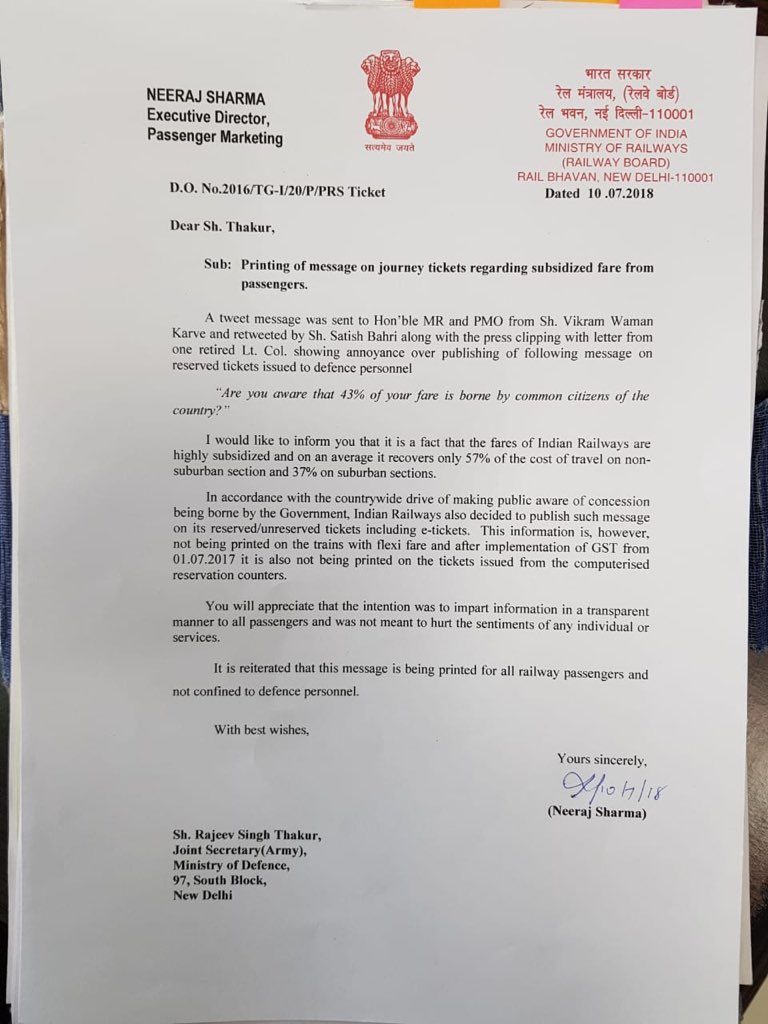 The letter also mentions that in accordance with the countrywide drive to make people aware of the concessions which are being provided to the public by the Government by giving railway tickets at a highly subsidized rate recovering only 57% cost of travel in non-suburban and 37% on suburban sections, the message was being printed on railway tickets and, to clear all misconceptions the last line in the letter reiterates that this message is for all passengers using the India railways and not for anyone in particular.

It also mentioned that the message is, however, not being printed for the trains with flexi-fare and after the implementation of GST, it is also not being printed on tickets issued from computerised reservation counters.