Kashmir: Terrorist caught on tape begging locals not to inform the Army of his location 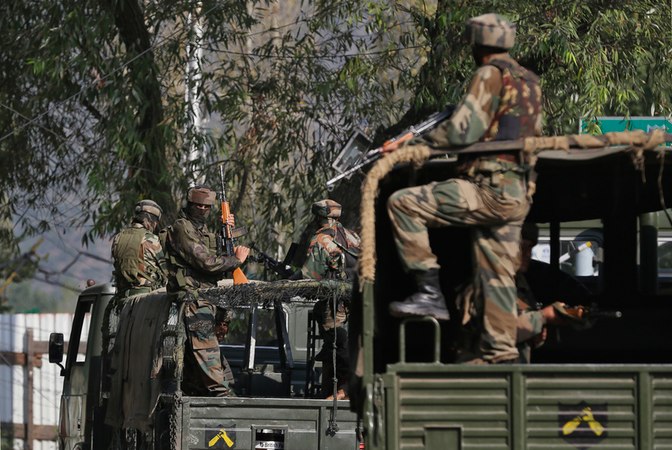 The security forces have launched massive anti-terror operations in Jammu and Kashmir since last year and its impact is already visible. Media outlets have shared a recently surfaced video where a Hizbul Mujahideen terrorist is seen begging the locals not to inform the whereabouts of terrorists to army personnel.

In the video, a Hizbul Mujahideen terrorist named Tariq Maulvi is seen pleading the locals with folded hands not to turn informers and give the location of terrorists to security forces. According to a report in Republic TV, Maulvi was speaking at the funeral of slain Hizbul Commander Umar Khubaib. Khubaib alias Umar Malik was recently gunned down by security forces in Kilora area in Shopian district early on Saturday morning. A total of five terrorists were killed in that encounter.

In the video, Maulvi is seen speaking in part Urdu and part local dialect. As per a report published in Republic world, Maulvi is pleading,”We face such difficulty in recruiting just one boy. We run from pillar to post. Those mujahids who had created their own fields, lands and routes, are not being allowed to stay there. Tell us if what we are doing is wrong, if picking up arms is wrong, we will quit, but please do not turn into informers. Is it only our responsibility to fight for Azadi? Let us quit everything then and you can move in the path of Allah. Why are you people doing such bad things? Shopian district has suffered the worst damage. Indian security forces have killed every senior mujahid with experience. All that is left now are poor, untrained ones like me. If we are noticed by a civilian, we have to change four villages. Why are you informing the Indian forces? They are sitting in their camps and they are aware of our every movement. Please stop spying on their behalf. Our fight is against India, but we need your help.”

It is notable here that the Indian Army has launched ‘Operation Clean up’ to rid Shopian district of Islamic terrorism in the month of May. The operation was started after reports of increased terrorist activities in the area and around 4000 personnel of the Army, CRPF and Jammu and Kashmir police were deployed in the area. The operation involved a door-to-door search, combing and intel gathering.

Chief of Army Staff General Bipin Rawat had been firm on stringent measures to weed out terrorism in the valley and the Indian security forces had killed over 200 terrorists last year and many have been slain this year too. Shopian had also seen many incidents of locals providing cover to hiding terrorists and interfering in anti-terror operations with stone pelting. COAS had stated that any locals who support terrorists will be treated as anti-national elements and the security forces will take retaliatory action.

Terrorists have also been targetting army and J&K police officers who are on leave. Recently, a rifleman named Aurangzeb was tortured and killed in Pulwama.