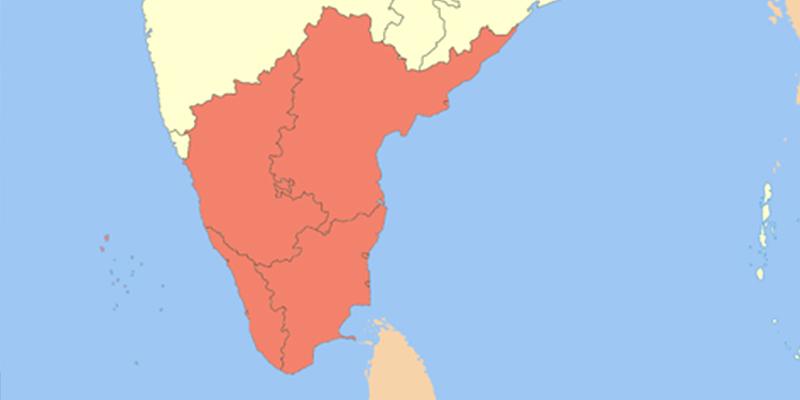 In the wake of the floods in Kerala, Liberals and Communists have displayed their true intentions as they used a tragedy to further their own political agenda. Just as the Christians organizations have been known to proselytize during relief operations after natural calamities, the liberals in India used the floods in Kerala to further their agenda of diving India along regional lines.

Journalists have started sharing articles which were written earlier to sow the seeds of division within the country by peddling the narrative that Southern India is cheated of its rights by the ‘corrupt and communal bigots in North India’.

For rich South India, the rest of the country is a tax burden@mihirssharma writes: https://t.co/fbtEiXWxWf

Another article that is being peddled is from 2016 which talks about  ‘The United States of South India’. Some people afflicted with hyper-intellect have also suggested that Maharashtra join this band of Southern states too.

Worth debating? United States of South India: Can a southern collective get us a better deal from Delhi? | The News Minute https://t.co/6YJYAaxToJ

People on social media have obviously not taken kindly to this vile attempt to further their hideous agenda in this moment of misery and at a time when the entire country has united to help those affected by the flood in Kerala. However, with due regards for the circumstances, there are a few things that our intellectuals need to be reminded.

Firstly, the sort of grand unity between the southern states that is between by armchair intellectuals exists only in the delusions of their own imagination. In the real word, Karnataka and Tamil Nadu cannot solve the water dispute amicably, Andhra Pradesh and Telangana could not even exist together as a single state and had to be divided and a certain section of Karnataka is demanding their own separate state. Therefore, to paint the entire Southern region of the country as a united block against Northern India is wishful and sinister imagination.

The ‘Breaking India Forces’, as they are called these days after the term was coined by Rajeev Malhotra, desperately wish for the balkanization of the Indian Union. To make their deepest desire come true, they fill the hearts and minds of people with resentment to the point where they are no longer able to think clearly. And the excuse these forces have come up with is that the Southern states receive disproportionately less funds from the Center for the contribution they make through taxes. The News Minute article, however, takes care to mention that the author does not advocate secession but the entirety of the article only fuels resentment between the two regions of the country.

The authors appear to make the argument that it is unfair for the more prosperous South to contribute more towards the development of other regions of India that are not so prosperous. If we accept the logic at face value, then why is it not unfair to Indian citizens across the country to pay for the welfare and rehabilitation of Rohingya refugees who have entered the country illegally, considering it is the same “liberals” who advocate for the settlement of illegals? Carrying the logic forward, the rich might ask why should they pay the government more money direct taxes than the middle class; prosperous families might ask why should they pay for various welfare schemes which are directed towards benefiting the poor and the less fortunate; and so on and so forth. Our intellectuals constantly demonstrate their love for socialism and redistribution of wealth and yet on the occasion when more prosperous southern states pay for the less prosperous other regions of the country, they suddenly begin to find flaws of redistribution. In fact, the Congress was hand in gloves furthering the North-South divide earlier.

The concept of social justice mandates that those more fortunate walk the extra mile so that the less fortunate can have more opportunities to escape the clutches of poverty and illiteracy and various other maladies. It is extremely unfortunate that for liberals, social justice is merely a political gimmick which they are ever willing to abandon for their primary agenda, that is, the disintegration of the Indian union. Interestingly, such propaganda about an imaginary United Southern front against Northern India was never heard when the UPA was in power. It only goes on to show that the ecosystem is more than willing to let India burn if only they could rule over the pieces.

In recent times, there also has been a concerted attempt to portray the Southern states as having a culture fundamentally distinct from Northern India which could not be further from the truth. It is well known that Shri Rama is venerated as much in the South as He is in the North and only a fool who has had his buried in the sand for too long would claim any different.

More fundamentally, the crux of the culture of Southern India is the same that has spawned the vast array of different cultures in Northern India, that is, the ancient Sanatana Dharma. It has also been portrayed that the ‘anti-caste’ movements in Tamil Nadu have largely rectified the downsides of the caste system when nothing could be further from the truth.

Tamil Nadu remains a state that witnesses a high rate of caste-related atrocities committed by dominant OBCs on Dalits and the virulent anti-Brahmin strain of politics that is mainstream in Tamil Nadu is not unknown to any. Southern India is often portrayed as a heaven of some sort and Northern India as hell while the truth is that both regions have their distinct set of problems which they could help each other solve effectively.

It is indeed amusing that liberals and intellectuals who claim that they want Hindus and Muslims to coexist peacefully use every device under the power to foment divisions within the Hindu society. While they urge Hindus to coexist peacefully with Muslims and Christians, as they should and we wish as well, they constantly fuel resentment within Hindus along caste, linguistic and ethnic and regional lines to try to ensure that various sections of the Hindu population never coexist peacefully with each other. Irony is indeed embarrassed when the same people who want peace to prevail between India and Pakistan do everything in their power to ensure that various regions of India are not able to coexist in harmony.

It is quite obvious at this point that the goal of liberals and intellectuals is neither peace nor coexistence nor social justice, their sole agenda is to continue to hold the country hostage for their personal benefits. They wish to perpetuate the British legacy of ‘Divide and Rule’ so that they continue to rule the roost in the corridors of power. And if the seeds of hatred they sow threaten the disintegration of the Indian Union, they would hardly care as they would continue to prosper financially and otherwise.