Cow slaughter, communal undercurrents and allegations of police atrocities: A tale of three villages in Bulandshahr

As the villages crawl back to normalcy, heart goes out for Sumit, whose untimely death killed dreams of the family and Inspector Subodh Singh. 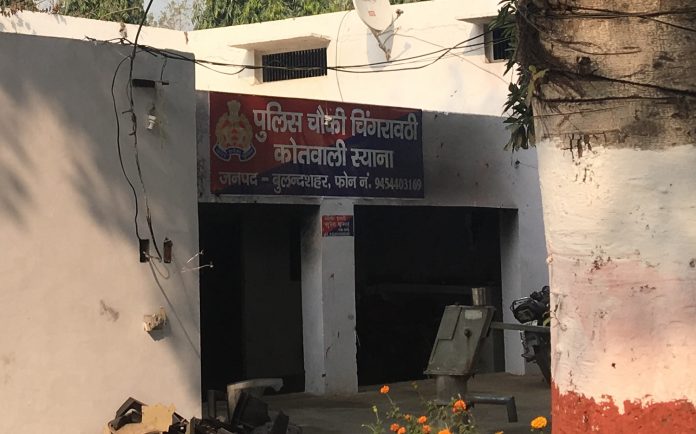 Mahav village in Bulandshahr bears a ghostly look. “The police is picking us up randomly, at will. Everyone is scared and hence most men have fled the villages. Some women have stayed back but fearing police action, people have run away,” explains a villager.

It was on a farm in this village that carcasses of about 25 slaughtered cows were discovered in the early hours of 3rd December. The news that cow carcasses were discovered spread quickly and the villagers gathered. They gathered the carcasses in a truck trolly and brought it on the main road, a few kilometres away, at Chingravati Police Chowki. The villagers gathered at the police station and the road was jammed by protestors. Local villagers say this was the first time such an act of cow slaughter had taken place in their village. “Someone from neighbouring village must have done this. No one from this village would do so,” a villager said.

Chingravati Police Chowki is situated right next to a college and the main bus stop for nearby villages. On 3rd morning, 17-year-old Sumit from a nearby village went to drop his friend to the Chingravati bus stop. The mob protesting at the police chowki had turned violent. Stone pelting had started and people were running about to take shelter. Inspector Subodh Singh, according to onlookers, accidentally fired his gun, which killed Sumit. The boy, who was studying in Noida for some years and was visiting home for a few days, will never return home.

In another village, on the other side of the bus stop lives Yogesh Raj with his family. The house is now empty save for a few cows and buffaloes. His aunt sits on the floor, bruised, showing her wounds and a red-eye to anyone who would listen. Her husband and son, who is a student preparing for competitive exams, have been taken away by the police. “In the middle of the night, 35-40 policemen came, dragged us, beat us up. What kind of man beats up women like this?” she asks. “Beh**k***di, uth jaa, they (policemen) used such expletives for us that even our parents have never used for us,” added Yogesh’s another cousin, who was also allegedly dragged out of her home and beaten up by male policemen.

At least two of the four suspects arrested, Sajid and Saifuddin (some reports call him Sarafuddin) arrested by the police on the basis of one of the FIRs lodged are from Yogesh’s village. Two others, Asif and Nanhe, who were arrested have a previous 2015 case of cow slaughter filed against them, claim the police. When OpIndia team visited the village, the villagers curiously spoke of an alleged mosque-turned-madarsa and explained how the loudspeaker does not even work. “Last year Yogi government had got all loudspeakers removed. The first loudspeaker at our Mahadev temple was removed, then the administration removed their loudspeaker,” explains a villager.

We got curious about the mosque/madarsa. When we reached the spot, we spotted two male journalists armed with cameras and mics, clicking pictures of the women and children in the neighbourhood of the mosque. Then, as if being led by a pied piper, the women followed the journalist dressed in a grey suit. They walked over to a shed with a green door. Curious, we followed, wondering what is up. When we reached, the doors were shut on our faces.

No one else other than those two journalists were privy to what was being discussed there. Some men standing there explained to us that the women here had ‘witnessed’ that an announcement was made on loudspeaker by Bajrang Dal men to gather for a meeting on 2nd December night. “We men were at Itjima and only women and old people were present when the announcement was made. Hours later the carcass was found,” a local villager explained. What is strange here is the closed-door meeting taking place between the said ‘witnesses’ and the journalists. These journalists were from a video platform which had partnered with a data analysis website which was called out for misreporting on ‘hate crimes’. Maybe in a few days, we will get to see what those women spoke on camera which was exclusive only to these journalists.

Ijtima is a congregation of Muslims which is an essential part of Tablighi Jamaat. Often referred to as a show of strength of the Muslims, the 3-day event is all about moral reform of individuals and often described as ‘making Muslims true Muslims’. Lakhs of Muslims from across the country and world had gathered in Bulandshahr.

One of the theories making round was that the cows were slaughtered to be cooked and sent for the Ijtima meal. Bulandshahr Police, however, denied the theory claiming that the event was at least 40-50 km from the village.

However, speaking to OpIndia, villagers and some policemen on condition of anonymity said that the theory could not be ruled out. Reacting to Bulandshahr Police’s tweet ruling out the possibility due to distance, a policeman said that food for the lakhs of people gathering there had come from places as far as Meerut and Ghaziabad. This is just 40 km, he added.

Sumit, according to her, was at the wrong place at the wrong time. Many media reports claim Sumit to be in his 20s, but his family says he would have turned 18 next year in May. He was neither associated with VHP or Bajrang Dal, as quoted by a certain section of the media. “Bring back my babu,” says Manju, Sumit’s sister, who could not stop crying. “Let him have dignity in death. We request the police to remove his name from the FIR. He was innocent,” says his father.

In Yogesh’s village, his neighbours claim he is innocent. “He was here sleeping when the incident happened. He is wrongly dragged into this,” they say. His family and neighbours claim he has not even filed the FIR against cow slaughter for which arrests were made. “Because he is a local leader, taking on causes like cow protection and fighting eve teasers, police put his name in the FIR,” Yogesh’s neighbour explains. While there is no communal tension in the village, one could feel the undercurrents strongly. It is in this village where Yogesh, as well as those arrested for alleged cow slaughter live. Unlike their neighbouring villages, they don’t get along that well with their neighbours of other community.

The violence on 3rd December took one more life. That of Inspector Subodh Singh, who had accidentally shot Sumit. Singh was the initial investigating officer in Dadri lynching case which took place on 28th September 2015 but was transferred on 9th November 2015. Some reports had claimed that an army veteran shot Singh, while others say someone from mob took his gun and shot him while he tried to escape after Sumit was shot at. Additional SP (City) Bulandshahr Police said that a special investigation team (SIT) has been formed which will investigate the killing.

As the villages crawl back to normalcy, heart goes out for Sumit, whose untimely death killed dreams of the family and Inspector Subodh Singh.