Numerous political parties and journalists and activists with hidden political agendas have attempted to discredit EVMs after Exit Polls hinted at a clear NDA victory in the 2019 Lok Sabha elections. The Election Commission has issued several clarifications over the entire matter and assured that all protocols and guidelines are being followed. In spite of that, the ‘Compulsive Contrarians’ will choose to rather believe in their own versions of fantasy rather than objective reality.

Elephant Passing Through The Hole Of A Needle.

The relevance of the above line would be clear after going through my answer.

The whole process of voting through EVM has so many checks and balances that the chances of manipulating machine and influencing outcome is ZERO. If a machine is tampered at any stage of the election it would be known at the time of polling or counting very easily.

Before I go into the technicalities, let me first take you through the journey of EVM in my constituency (Bhadrachalam)

Arrival of machines at District Headquarter

After the announcement of elections, the EVMs were received from BEL (Bharat Electronics Limited) and were kept in the District Headquarter. All EVMs are stored in Strong Rooms. Every time a strong room is opened or closed the political parties have to be informed first. The entire process has to be videographed and there is a 24×7 surveillance through CCTV and deployment of police force.

Arrival of machines in Assembly Constituency

Till 3 weeks before elections, I had no knowledge of which EVMs will come to Bhadrachalam constituency. The process of allotment of EVMs to a constituency is done through randomization in presence of political parties.

After receiving EVMs from the district, the machines were stored in Bhadrachalam EVM Strong Room. Again the entire process of CCTV, informing political party, videography was followed.

Just a week before the election, second randomization is done in presence of General Observer and Political Parties where we came to know which machine goes to which Polling Station. For example machine number BCUEH61401 was allotted PS No: 1-Krishnapuram in Wazedu Mandal of Bhadrachalam AC (Assembly Constituency). This list is shared with all political parties.

So the possibility that a different machine was used at a polling station is negated. On the day of polling or on the day of counting the political party can easily point out if there is any discrepancy in the ID of machines being used. 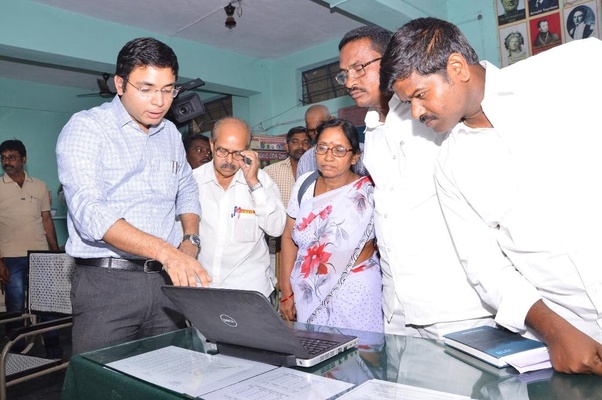 Before sending machines to Polling Stations, all the machines are verified by casting one vote per candidate in all machines in presence of Political Parties. This is done to make sure that only one vote goes to one candidate.

On the day of commissioning, the political party can randomly select a machine and cast 1000 votes themselves and count the slips from VVPAT to make sure that all machines are correct.

All the critical sections of machines are sealed in a way that signatures of all political parties are present on every seal. Each seal has a unique number. If somebody breaks open the seal then it would be known immediately.

Every candidate can appoint 1 Polling Agent Per Polling Station on the day of polling.

Polling Agents are given the updated list of Electoral Roll. If you go to a polling station then you will find at least 4–5 polling agents inside the booth along with election staff.

Every time a voter comes, the identification of voter is done by all polling agent. This makes sure that there is no impersonation or bogus voting.

This is an important part of entire polling process. Before the start of polling the polling agents should cast minimum 50 votes. The results of the mock poll are shown to all political parties and they can tally the results. This makes sure that nore-wiring or re-connection of the circuit has been done and the machine are working normally.

All Presiding Officers have to give a certificate that the mock poll was done and the result was tallied.

At the end of poll, all machines are sealed in front of Polling Agents and they have to mandatorily put their initials on every seal and compartment.

Polling Agents are given a record of total votes. So, if at the end of poll 974 votes are cast- a statement of this signed by Presiding Officer is given to political party.

After the poll, the EVMs are again stored in Godowns with CCTV, Police Protection. This time the political parties are given an option to

Permanently sit in the front of Strong Room 24×7 !

There is separate room arranged where Political Parties can see the live feed of Strong Room on large LED screen.

These arrangements are made to make sure that no one enters (including District Officials, Returning Officer or any other ECI Official).

Once the EVMs are sealed in the strong room, it can only be opened again on the day of counting.

On the day of counting the strong room is again opened in front of Political Parties. When a machine arrives for counting, the following points are verified:

When all the above facts are tallied, the RESULT section of EVM is pressed to know the number of votes cast in favour of one candidate.

The result of a machine is not communicated unless the authenticity is certified by all candidates!

The result sheet of every machine has signature of all candidates.

To remove all doubts, the political parties can select One Random Polling Station where we have to count the VVPAT slips and tally it with the result shown in the EVM.

The points mentioned above are just a glimpse of rigorous process that we follow to ensure transparency.

Now I would address the rumours and misconception regarding EVMs.

1.EVMs can be hacked so that no matter which button you press the vote will go to same candidate

The chance of above happening is same as an elephant passing through the hole of a needle.

On the day of commissioning and polling the political party can themselves cast their votes randomly and verify that the vote has actually gone to the candidate for which they have voted.

2.After the polling EVMs can be tampered to cast extra votes.

No. Since the number of votes are already communicated to the political party, therefore, if extra votes are cast then it would reflect on the day of counting.

The machine also records the time of last vote polled. Every Presiding Officer gives a diary (called Presiding Officer Diary) in which the end time of poll is recorded. If someone tries casting extra votes then there would be a mismatch in the time of closing which can be easily identified on the day of counting.

So if you manage to take away polled EVM in your house, it will be of no use!

Moreover, with the introduction of VVPATs there is a 2 level check. Political parties can randomly select a machine and ask us to verify all votes cast by counting slips inside VVPAT.

The beauty of the election process is that:

Every step involves the participation of Political Party. Without their permission and signature no machines can be touched, votes cast or counted.

The only place where you can fiddle with EVMs is in Lab or in your Mind. There exists no chance of manipulating machines during the entire process of election.

Conducting elections is one of the most difficult yet highly gratifying task and I am proud to be a part of this democratic process and working under Election Commission of India.

Have more doubts and queries regarding Election Process? Do drop in a comment.

Wish to become a future bureaucrat. Read here:71 to 51: My new book by Bhavesh Mishra on 71 to 51: My book for complete preparation strategy

Many people have pointed out instances where EVM machines have shown more votes than was registered.

Can it take place?

Yes. After doing mock poll (around 50 votes on the day of polling), CLOSE and CLEAR button have to be pressed so that when the actual voting starts the count starts from zero.

In very rare cases if a Presiding Officer forgets doing CLEAR then the count will start not from zero but from the mock poll count (say X).

Is it a big issue?

Not at all. On the day of counting all such EVMs are kept aside and according to the instructions of ECI, the VVPAT slips need to be counted for all such machines. The count of VVPAT slips will definitely tally with the actual number of votes.

London mayor Sadiq Khan promises to bring the Indian Premier League to the British capital as part of his reelection campaign.
World

BBC Urdu published a video on YouTube highlighting the prejudice against Hindus that textbooks in Pakistan advocate.

Constant ‘beheading’ threats by Islamists: Hindus come out in large numbers to support Yati Narsinghanand Saraswati, demand security for him

Not imposing a lockdown may be a bad choice but imposing it to combat Covid-19 will prove to be infinitely worse.

Japan has long delayed the decision to dispose of the wastewater from the Fukushima Daiichi nuclear plant over criticisms and safety concerns.

Pfizer wanted Brazil, Argentina to put military bases, Federal reserve as collateral: Why India kept Pfizer away and how the usual suspects are wrong

Pfizer has been accused of countries in Latin America of pledging their sovereign assets, military bases and financial reserves to protect itself from any adverse fallout of the vaccine
Read more
News Reports

After explosive Clubhouse confessions, Prashant Kishor starts building ground to blame only Mamata Banerjee if Bengal is lost: Here’s how

Attempts to draw false equivalence between the Kumbh Mela and Tablighi Jamaat congregation do not make sense: Here’s why

Attempts are being made to draw false equivalences between the Kumbh Mela and the Tablighi Jamaat congregation last year.
Read more
News Reports

India has to become a ‘Hindu Rashtra’, or it will be turned into an Islamic nation by 2030: Kerala MLA

"Can we let this nation (go) to any particular community? This needs to be discussed. Somebody has to speak up," PC George emphasised.
Read more
OpIndia Scoops

As per two posts by hackers on a hackers' forum, they have gained access to Tata Communications servers and sold them.
Read more
News Reports

What happened in Chhabra after Hindu man was stabbed by Muslim men: Call for peace, attack on a Hindu the next day and more

On April 12, the administration extended curfew for one more day at Chhabra, Baran district in Rajasthan after the communal riot
Read more
- Advertisement -

How Islamism is sinking the boat of Pakistan: The recent violence by TLP provides a good example

Tata Communications denies data leak claimed by hackers: Here is what we know so far

‘Everybody is in such a haste to have their names appear in LiveLaw and Bar & Bench’: Delhi HC schools law student on PIL...

Nashik woman drives to crematorium with the dead body of her mother, could not find an ambulance