The photos and videos shared on social media show that the statues, fixtures, glass panes etc in the temple were smashed, curtains etc were burnt by the mob 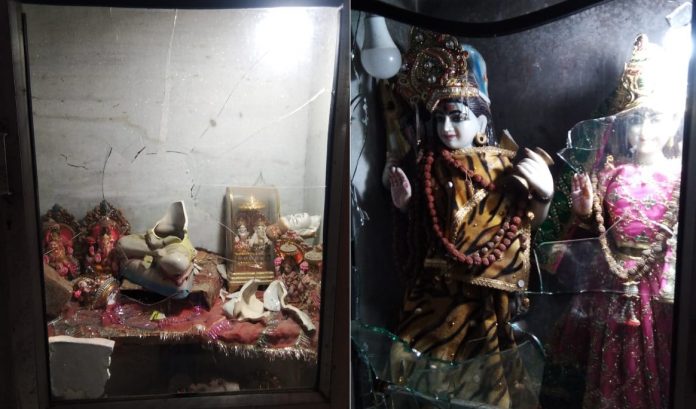 A temple in Chandni Chowk in Old Delhi was allegedly vandalised by a mob last night. According to reports being posted on social media by locals, the Durga Mata Mandir in Lal Kuan in Chandni Chowk area became the target of vandalism by a mob of 300-400 people on the night of June 30, 2019.

According to locals who posted videos of the temple on social media, at around 12 am, the Durga Mandir was attacked by 300-400 people belonging to the Muslim community. Along with the temple, the houses belonging to Hindus in the neighbourhood were also targeted by the mob, the locals alleged.

Yes as per locals. Muslims barged into house of a Hindu family and created huge ruckus and misbehaved with women of the family. https://t.co/QSIK8EsYdu

A video shared by rival AAP MLA Kapil Mishra shows youths storming into the temple, and also surrounding the Hauz Qazi police station in the area. Mishra tweeted that before the incident, a rumour was spread that a Muslim boy was lynched by a mob, forcing him to say Jai Shree Ram.

The photos and videos shared on social media show that the statues, fixtures, glass panes etc in the temple were smashed, curtains etc were burnt by the mob. According to locals, the population of Hindus in the area is just around 5%, and the rest 95% are Muslims, who mercilessly smashed the entire temple.

A team of Delhi police, comprising senior officials, arrived soon after they were informed about the incident, and they prevented further damage. The arrival of police also ensured that nobody was harmed in the incident. The police have so far been tight-lipped and we are awaiting a statement regarding the incident.