Watch: Akhilesh Yadav lashes out at a police officer after a man reached near the stage and started chanting “Jai Shree Ram” 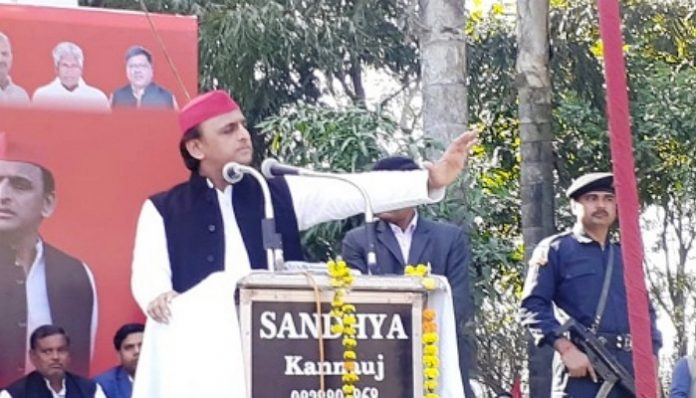 On Saturday, Samajwadi Party leader and former Chief Minister of Uttar Pradesh, Akhilesh Yadav, lashed out at a police officer after a man reached near the stage and chanted “Jai Shree Ram.” The incident happened when Yadav was addressing a gathering at Kannauj.

#WATCH Uttar Pradesh: Samajwadi Party President Akhilesh Yadav scolds a police officer after a man went near the dais and chanted ‘Jai Shri Ram’ while he was addressing a gathering in Kannauj district today. pic.twitter.com/2XGk9kQHhh

The man who reached the stage has been identified as one Ashok Shukla. Akhilesh Yadav was speaking over the issue of unemployment when Shukla interrupted him. He then reached for the stage but was soon overpowered by the security forces.

During the speech when Akhilesh Yadav was attacking the government for inflation, the man interrupted him and asked what he plans to do about if he comes to power. As his question was not audible to Yadav, he asked the man to come closer. When he repeated the question from near the stage, instead of answering Akhilesh Yadav instead asked him if he belongs to a political party. In response to this, the man chanted “Jai Shree Ram”, angering the SP leader.

The former UP CM then slammed a police officer present there for allowing the man to reach the stage. He asked, ‘how can he come here? You are providing security, how can he reach here? What were you doing? Now he can’t leave from here, I want that you bring him to me along with all the details like his name, father’s name, village etc’. He also asked the police to check the belongings of the man thoroughly.

After that, the former Chief Minister claimed that Shukla belonged to the Bharatiya Janata Party (BJP) and that he could have killed Yadav. He said that a BJP leader had threated him two days ago and now this man tried to breach the security, and he could have taken his life. He asked the police officers what actions will be taken against the man and under which sections he will be booked.

This is not the first time when Akhilesh Yadav intimidated a public officer on duty. Last month, he called the Emergency Medical Officer at a hospital in Chhibramau town of Kannuaj, a ‘Chhota aadmi,’ and told him to get out of the hospital ward.