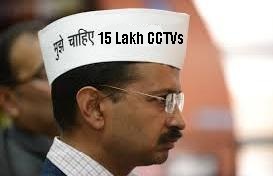 We had already seen, how 15 lakh CCTV cameras for Delhi, is a completely illogical plan, which is not feasible from any angle. Yet, this was used as a major poll plank during the Delhi Elections. Now that the elections are over, Sanjay Singh, member of AAP National Executive, has made a statement that AAP never promised 15 Lakh CCTV cameras. On a TV channel, Sanjay Singh made the following statement:

“…Media is the fourth pillar of democracy, it is also your responsibility. Yesterday I was on another channel, they had from somwhere obtained a figure that 10 – 15 lakh (CCTV) cameras will be installed. Delhi has a population of just 2 crores, 15 lakh CCTV cameras means, 1 camera for every 10 persons. Nobody will believe these talks. And they said, on these 15 lakh CCTV cameras, Rs 2 lakh crore will be spent. This figure is also wrong. Such illusions are being spread, such figures are being thrown around, a wrong environment is created among the people, hence Media must act responsibly.

The video can be found here. We are pretty sure, whichever channel he is referring to, has got the Rs 2 lakh crore figure from our earlier post itself. But what is interesting is, Sanjay Singh seems to have not seen the video of Arvind Kejriwal where he very clearly declares that Delhi will get 10-15 lakh CCTV cameras. Is the media guilty of spreading misinformation? Or is Sanjay Singh guilty of not being aware of his own leader’s statements? Is this a U-Turn? (see following video from 1.08 minutes onwards”

Not only this, Kejriwal, in his interview with Ravish Kumar of NDTV, did not deny this, and in fact went on to declare the cost estimate also of 15-20 lakh CCTV cameras. Transcript:

Ravish: You will install 15 lakh CCTV cameras in the city?

Video is available here. Watch from 27 minutes onwards. It will be interesting to see if any mainstream media picks this up and how Sanjay Singh and Arvind Kejriwal respond to this. Will this be another “terms and conditions apply” promise like the Free WiFi promise?