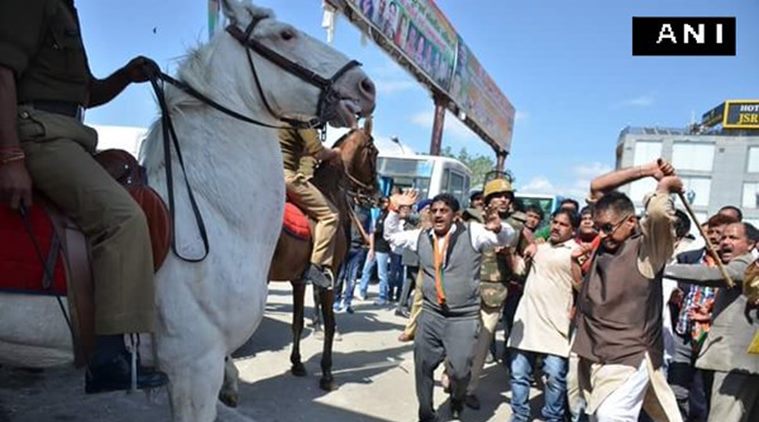 Two days ago, news broke out in Indian media that a BJP MLA had beaten up a horse. Several news channels and sites carried the news: Opinion laced reports such as “No confirmation whether the horse was anti-national” were seen all from India Today. Many others like CNN IBN live even claimed that the MLA was “caught on camera” breaking the horse’s leg. ABP News said the MLA was “mercilessly” beating the horse. Times of India said he broke the horse’s leg after a “Beastly attack”. This obviously led to huge outrage.

The video based on which all media reports were framed showed the BJP MLA swinging a lathi in front of the horse. It was impossible to say whether the lathi hit the horse or not, but the sound suggested that the lathi was hitting the ground, which could have been done to scare away the horse.

So how did a BJP MLA swinging a lathi infront of the horse manage to injure it on its hind legs? See the complete video here:

Till around the 15 second mark one can see the MLA brandishing the stick, and the horse collapses much later, around the 33 second mark, in what appears to be another video, stitched to the first. How did it suddenly fall? The MLA himself revealed this with a video of the incident from a  different angle:

घोड़े को लाठी मारने वालो की असली खबर।This video demonstrates the power of paid media and how gullible we are when it comes to believing things. This also shows how easy it is for the ruling party to manage the media and conveniently shift attention from relevant issues. Police officers rode on horses and chased the demonstrators. Normally this wouldn’t be seen except in emergency situations, but then again the Uttarakhand police has proved how vulnerable it is in front of the dictatorial State government led by Shri. Harish Rawat Ji. Most media channels have been circulating the news that I hit a horse and injured it. Please watch this video to know the truth. I strongly condemn the action of the youth involved in this video for pulling on the horse, making the poor animal lose his balance and fall, thus injuring himself. I apologize on his behalf as this is against my personal and the party’s principles. We belong to a party which is led by the likes of Maneka Gandhi and believe in treating animals like family. I urge you to take a moment to watch this video. I will continue to represent and fight for the interests of my constituents, humans and animals alike. These fabricated stories show the levels to which the State government of Uttarakhand will stoop to to grab public’s attention.

From the above video, one can clearly see, one of the protesters pulls something off a policeman riding the horse and in the commotion, the horse which was back-tracking trips over what seems to be a step and falls.

So if the stick was wielded from in front, and if the horse fell for some totally different reason, how and when did he get hurt? For this we need to see the first video again. We have trimmed the relevant part and posted here. Watch how the horse falls and his left rear leg gets hit by a metal rod:

Screengrab of the rod:

This clearly explains the sequence of events. The horse’s leg was never hit by anyone but it got hurt when it hit a metal rod. In fact, this was the MLA’s version too. In an Indian Express report, dated 15 March, at 5.02 am, the MLA is quoted as saying:

“We came to know that the rear leg of one of the horse got trapped in the iron-angle on the roadside. While trying to pulled it out, the horse suffered injuries.”

So was this version known on the first day of the incident itself? NDTV too reported that the video nowhere shows the horse being beaten by the MLA:

More videos of the BJP protest in Dehradun have emerged since and show that while Mr Joshi did lead supporters in a charge at policemen, hitting out repeatedly with the stick, he did not strike the horse. But other protesters aimed repeated blows at the animal. Video footage shows the policeman backing the horse up a short staircase, and the animal slipping as a protester yanked at the cop, appearing to twist its leg under its own weight. In heartbreaking visuals the white horse named Shaktiman is seen hobbling on three legs, its left hind leg bloodied and broken.

Today’s Indian Express and Economic Times too slyly mention the fact that the horse’s leg got stuck in a railing:

Indian Express: Shaktiman kept stepping back from the group of protesters, till one of her legs buckled and got stuck in a railing.

Economic Times: A while later, a BJP protester caught the horse’s whip, making it lose balance and collapse with his rear leg stuck in a railing.

So where are the media houses who claimed to have “caught on camera”, the BJP MLA “breaking the horse’s leg”? Is it yet confirmed that India Today is an anti-factual media house? Is the media guilty of a media-trial, of prematurely smearing the name of a BJP MLA?

Inspite of this, one can surely expect more trouble for Joshi, the BJP MLA, as the event has taken a political turn and the ruling Congress Government, which has been given a fake story on a platter by the media, will try to make the most of this and ensure action against the MLA.

On a larger note, there is no denying that the injury was caused to the horse, indirectly because of the mob of protesters. The person who yanked at the cop which might have led the horse to retract and lose balance over the steps and ultimately get hit by an iron railing, needs to be brought to book. At the same time one must question the cops for choosing to use horses in a mob like situation. As one can see in the below video, one of the horses almost ran-over some of the protesters://

As for the horse, contrary to sensationalist rumours that the leg might have to be amputated and the horse might be put down, doctors have now said that the horse won’t need an amputation and could walk by April-end.