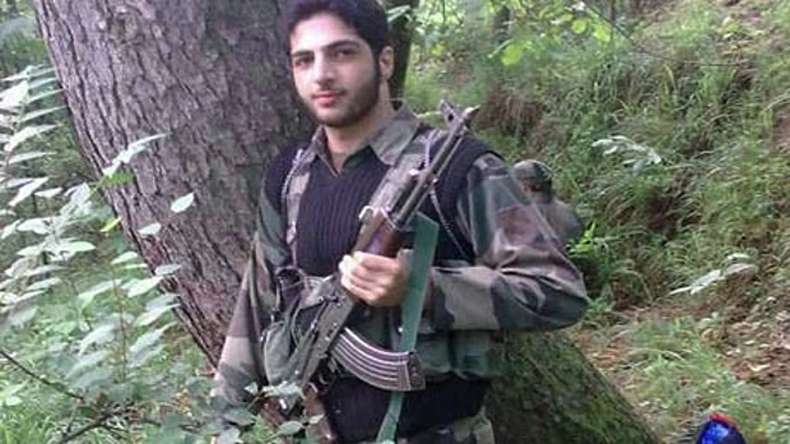 Hizbul Mujahideen terrorist Burhan Muzzafar Wani, was shot dead on Friday by security forces along with two of his accomplices in Kokernag area. Wani was seen as the main draw for many young and educated boys in South Kashmir turning into terrorists in recent months. He featured in videos and photos posing with weapons and taunting security forces, which were circulated on Facebook and WhatsApp in an attempt to recruit young Kashmiri men.

No sooner did news of his death come out, the spin began. Former J & K CM Omar Abdullah seemed more worried about the aftermath rather than congratulating the army for neutralising a major target:

If this is confirmed its big news & will also mean some tense days in parts of the valley. https://t.co/fgqPeFCE8x

Soon semi-clean chits were being handed out

There was so much hype around Burhan Wani on social media, so his killing is big. Not sure how many attacks he actually led, though.

For all Burhan’s social media activity I don’t recall any militancy incident attributed to him while I was in office. Not sure after that.

@tufailelif Which legal code are you referring here which allows ‘terrorist’ to be shot dead. FYI Wani had not led any attack personally.

And then the spin:

Mark my words – Burhan’s ability to recruit in to militancy from the grave will far outstrip anything he could have done on social media.

The only difference between Zakir and Omar Abdullah is latter is a Politician. Rest all same. #BhuranWani pic.twitter.com/LFL9M6RTM3

On cue, Hindustan Times started this poll. The media had picked up from where Abdullah left:

Barkha Dutt to joined in, who found it important to give details about the family background of Wani:

Social media users were quick to condemn these attempts at sympathising with a wanted terrorist:

Is this code for “Why did we kill a chocolate faced boy, son of a teacher? All he did was Facebook and Twitter”? https://t.co/It131bgJl5

Even Mohandas Pai, former member of Infosys Board of Directors was appalled at Barkha Dutt’s tweet:

More journalists were found to be closet Wani supporters. For example this journalist working for leftist portal TheWire.in termed Wani a “martyr”:

Leftist heroes like Kavita Krishnan and JNU sloganeer and Kanhaiya Kumar’s friend Umar Khalid slammed Wani’s killing. Krishnan, who is a staple panelist on some TV shows called it an “extra-judicial” killing:

Shame on the extra judicial killing of Burhan Wani, and the killing of 8 protesters/mourners in his funeral. https://t.co/zy9muUP1vM

Under no law anywhere in the world can death in a bonafide anti-terrorist operation be termed 'extra judicial'.https://t.co/hpKbctfB3A

Umar Khalid chose to use this moment to inspire more people to pick the gun:

Watering down much? He calls for picking up Wani’s gun and keep shooting. https://t.co/PTbiGjPhvf

And Kanhaiya himself left a cryptic message saying violence in valley is not the answer. Seems violence can be the answer when Wani and gang wield guns but not when army counter-attacks

Indian Express went one step ahead and changed its Facebook cover page to that of Wani’s dead body being venerated by Kashmiri Hizbul sympathisers. Social media users were obviously appalled:

This new low of @IndianExpress is utterly fucking disgusting!! pic.twitter.com/SliSw88t6j

Dear @IndianExpress , please remove ‘Indian’ from your name. Thanks. pic.twitter.com/0NUcl6s20p

The best though was saved for the last. When India Today journalist Rahul Kanwal tried to find justification for Wani’s radicalisation, albeit a contrived and idiotic justification, for which he was slammed:

Lack of economic opportunity & no hope of a better future is creating generation of young Kashmiris who are acutely frustrated & very angry.

Please help us understand how many Kashmiri Pandits,who were made to leave their homes, picked up guns?@rahulkanwal pic.twitter.com/5HFAo1K84y

.@rahulkanwal Only Kashmir valley has economic & employment problem, rest of India is booming.

How the hell these dolts become journalists.

Only a few journalists spoke out against these terrorist sympathisers:

So one shld have let him romanticise terror? Sometimes it’s more imp to crush the inspiration than the terrorist https://t.co/ujx1DCeDho

Any joker who picks up gun has to be & shud be neutralised. Real heroes are the brave hearts who ensure Constitution of India rules supreme

The kind of person who probably calls Tiananmen Square a parade mishap. https://t.co/AlRfar32D6

For journalists in Delhi shedding tears for terrorist Burhan Wani, being an apologist for Islamist terror, just one thing. You are a coward!

#BurhanWani was not a separatist or a martyr, he was a bloody terrorist. He killed innocent Kashmiris for money. https://t.co/685YDJ181C