Uttar Pradesh: Lessons for liberals who jumped down the rabbit hole

Phew! That was quite a bromance between two of India’s most admired Shehzadas. But you know, at the end of the day, UP ko anti-Romeo squad pasand hai.

The result from Uttar Pradesh had not been in doubt at least since March 3. That’s when Amit Shah, instead of ducking questions and hedging his bets, began to openly dare the media to make the UP elections a referendum not only on demonetization, but on the performance of the Modi government itself.

Then, the exit polls came to light, followed by Akhilesh Yadav’s clearly defeatist comments and Mayawati’s absurd charges of EVM tampering. The election results were written in large letters on the faces of the BJP’s two main opponents. Nevertheless, it was amusing to see some alleged journalists fanning the flames of hope until the bitter end. I shall not name them of course. Stories about “Jat anger” and “BSP surge” and “desperate Modi in Varanasi” being already past their sell by date, one can only assume that these Extra Terrestrial (ET) reporters were working for tips.

In the end, it came down to a nail biting contest for the 4th position in Uttar Pradesh between the RLD, the Congress and two small BJP allies : the Apna Dal and the Suheldev Bharatiya Samaj Party (SBSP). This, despite  Honorable Priyanka Gandhiji  who did “more than just physical campaigning”.

Such a tremendous blow to a feminist icon so close on the heels of International Women’s Day is one symptom of a society still neck-deep in patriarchy.

Another symptom of patriarchy is the fact that I had to fish out this enlightened article from the Google Web cache here. Because much like the Congress disappearing from the map of India, the original article has disappeared from the website of The Indian Express.

Anyway, the contest for 4th place got hotter when it seemed for a while that Mayawati was also throwing her hat into the ring. But just in case you are feeling a bit sorry for the BSP, please don’t. If you can find it in your heart, better feel sorry for those suckers who had to pay several crores. That too probably in notes of Rs 100 (or less) at the peak of notebandi.

There is a lesson here for everyone and I’ll start with the lesson for the BJP and its supporters (or at least its online sympathizers). Stop worrying about a tiny regional party that I do not care to name over here. No matter whether the Congress is unconscious, in the ICU or high on mood altering substances, they will continue to be the BJP’s principal challenger for at least a decade and likely more. Stop falling for the media trick of sending the BJP to chase a tiny mosquito through the jungle while it is being stalked for prey by the expert carnivores in the wild.

The bigger lessons, of course, are for the losers in this election. The reason Akhilesh Yadav boarded the media train to nowhere is because he drew exactly the wrong lessons from Modi’s career. Akhilesh Yadav saw that Modi had a fantastic PR campaign in 2014. He convinced himself that only if he could get one of those for himself, he would win as well.

But what Akhilesh didn’t realize is that he was only looking at the tip of the iceberg. He did not realize that Modi’s showmanship was buttressed by 12 years of working hard at the nuts and bolts in Gujarat. Akhilesh made the same mistake when he expected a repeat of Bihar 2015 in Uttar Pradesh. He saw that Nitish had great arithmetic and the PR skills of Prashant Kishore. What he didn’t see was that Nitish had spent 10 years pulling Bihar out of the trash the hard way.

Akhilesh Yadav was like the beaming kid who gets his photograph taken with his new bat that has a sticker of Sachin Tendulkar. No hairstyle, no tone of voice and no sticker can make a kid into Sachin Tendulkar. It takes talent, luck and more hard work than you can even imagine.

Of course, Akhilesh’s retinue of flattering patrakars were happy to tell him that the Yadav Shehzada was on his way to making history. He was paying them to enhance his illusion. Frankly, Akhilesh would have been better off listening to his veteran dad and battle hardened uncle.

The best thing about this election is that Mayawati’s ponzi scheme with caste / religious groups has finally come to an end. First Dalits, then Brahmins and now Muslims … her modus operandi of pretending to be advocate of one group in each election, then collecting her winnings and moving on had to end somewhere. She had a good run though and our society has only itself to blame for that.

By the way, the exact point where I knew that BJP had won Uttar Pradesh was when the Lutyens consensus shifted to a “BSP surge” from the narrative of an Akhilesh wave. You see, BSP is like a “safe space” where snowflake liberals go when they get “triggered” by the bitterness of reality. This is because Mayawati’s vision of India as a chaos of numerous social factions, all at perennial war with each other, holds a primal fascination for the Indian liberal. You know, the type that romances JNU. The liberals tried to insult voter intelligence by spreading the rumor that Jats in Western UP were wasting their votes on a tiny vote katwa party with no hope of crossing 20 seats. It didn’t work. When their machinations failed in the Yadav heartland, the liberals changed horses midway and gravitated towards their “safe space” in the BSP tent. No wonder then that the “idea of India” fell between two stools.

The final lesson in this election is for the pollsters, especially the elite ones at CSDS-Lokniti. How did they manage to dig themselves into a hole like this? 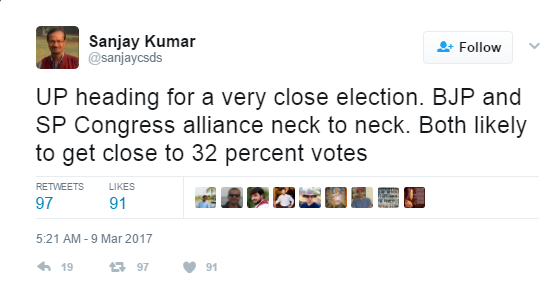 I do not for a moment doubt the sincerity and veracity of this next claim:

And yet they missed a historic wave in Uttar Pradesh. I can bet it’s because they let their own pet theory of the “vocal BJP voter” interfere with their conclusions. When you mix faith with science, the result is always havoc. Perhaps next time CSDS-Lokniti should be loyal to their own data rather than their own prejudices from the 90s. Come out of the Yogendra Yadav frame of mind.  But them, you can’t teach an old Commie new tricks.

The comedy of apologies: When the ones mocking Savarkar for mercy petition to British apologise to ‘secular goons’

As their old acts began to resurface on the internet, the 'comedians', who have been hailed as the champions of free-speech and often 'speaks truth to power', were soon hit with the reality and decided to run away from social media platforms as they deactivated their profiles.
Read more
News Reports

Watch: Bull refuses to be parted from cow, reunited after video of him chasing the vehicle cow was being transported in goes viral

While Ashok Gehlot has been claiming that his government is stable and he has the numbers, Sachin Pilot has stated multiple times that Gehlot has lost majority.

Sachin Pilot has expressed disappointment at Ashok Gehlot-run Rajasthan government and said that the government has failed to try and fulfil the promise it made to the people who voted for them.

Ahead of the Islamic festival, the Muslim leaders have reportedly expressed their concerns to the government regarding the preparedness and arrangements of cattle mandis (makeshift market) in the city amidst the coronavirus pandemic.

Trump attacks China again, says US holds it responsible for concealing the virus and unleashing it upon the world

Donald Trump again attacked China and accused the communist country of concealing the coronavirus and unleashing it upon the world.

Unnerved by the possibility that they might be entrapped in a legal dispute, comedians deactivate/protect their Twitter account after users highlighted their reprehensible old tweets insulting Hindu Gods and Goddesses
Read more
Fact-Check

Karthik Aryan has become the first Bollywood actor to drop a multi-crore deal with a Chinese brand.
Read more
Politics

Sara Abdullah had to suffer a lot of hardship to marry Sachin Pilot because her family did not want her to marry a 'Hindu' man.
Read more
News Reports

The comedy of apologies: When the ones mocking Savarkar for mercy petition to British apologise to ‘secular goons’

As their old acts began to resurface on the internet, the 'comedians', who have been hailed as the champions of free-speech and often 'speaks truth to power', were soon hit with the reality and decided to run away from social media platforms as they deactivated their profiles.
Read more
News Reports

Meerut: Hindu caretaker of a Shiv Temple beaten to death after he protested against remarks on his saffron attire, accused Anas Qureshi arrested

GST exemption on hand-sanitiser has the potential to increase price of domestic products and incentivise import from China: Read how

Exemption of GST on a product blocks the input tax credit available for a manufacturer, which gets added to the retail price
Read more
News Reports

Mehraj-U-Din Malla, the vice president of the Municipal Committee(MC) Watergam Sopore in north Kashmir's Baramulla district and was kidnapped by an unknown person on Wednesday morning
Read more
News Reports

Dead body of a Hindu youth named, Mohan Bagari, was recovered from the river in Hala city, which is a Taluka in Mitiari district of Sindh, Pakistan.
Read more
News Reports

The Chinese Ministry of Civil Affairs has directed the family members of deceased Chinese soldiers who killed in the Galwan Valley that they should abandon conventional burial services and instead cremate the soldiers discreetly.
Read more
News Reports

Watch: Bull refuses to be parted from cow, reunited after video of him chasing the vehicle cow was being transported in goes viral

While Ashok Gehlot has been claiming that his government is stable and he has the numbers, Sachin Pilot has stated multiple times that Gehlot has lost majority.
Read more
News Reports

Sachin Pilot has expressed disappointment at Ashok Gehlot-run Rajasthan government and said that the government has failed to try and fulfil the promise it made to the people who voted for them.
Read more