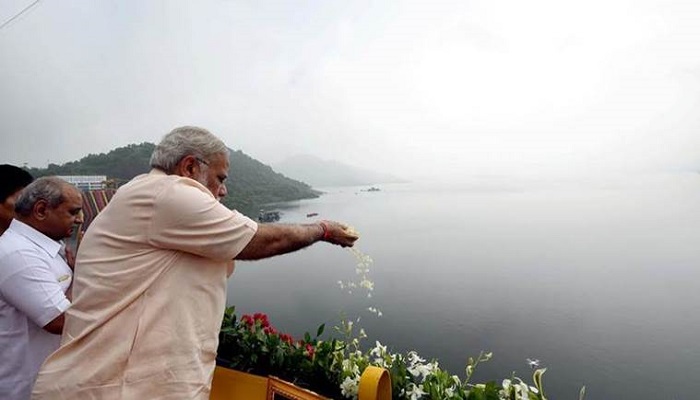 On Sunday Prime Minister Narendra Modi inaugurated the much publicised 138-metre Sardar Sarovar Dam on the Narmada river at Dabhoi, Gujarat. It was a landmark of sorts considering the amount of delays the project had experienced owing to protests by various activists. This increase in height from 121.92 metre to 138.68 metre has quadrupled the dam’s storage capacity led  to 4.73 million acre feet.

The foundation stone of the project was laid back in back in 1961. Ever since then it has been marred by protests by activists like Narmada Bachao Aandolan founder Medha Patkar, who have claimed that the dam’s water might displace about 40,000 families as their homes would be submerged. They have claimed that the rehabilitation process of these families is still not complete and that the water supply in the dam be stopped until its done.

PM Modi on the other hand stated in his speech that a massive misinformation campaign had been launched against the project. He claimed that he had a list of people who came in the way of the project but asserted that the government was always determined to continue the project.

He also claimed that when the World Bank (which had earlier agreed to fund the project), refused to give loan citing environmental concerns, the temples of Gujarat organised funds for the dam. He also claimed that no other project in the world had so many hurdles.

This is considered a flagship project by many as its implementation is expected to provide water, power and irrigation facilities to millions of people in Gujarat, Rajasthan, Madhya Pradesh and Maharashtra.

According to a press release from the PMO’s office, the project has helped transport waters to the water-deficient areas of Saurashtra, North Gujarat and Kutch via an elaborate canal and pipeline network. This project is now expected to benefit 10 lakh farmers for irrigation purposes and help supply drinking water to 4 crore people in both towns and villages.