OpIndiabringing the \'right\' side of India
More
HomeOpinionsIt is not vandalism that pains the leftists, it is seeing their mafia like...
Opinions
Updated: 6 March, 2018

It is not vandalism that pains the leftists, it is seeing their mafia like control weaken

There is nothing like the toppling of a Lenin statue to bring out the inner Communist in people.

In South Tripura’s Belonia, a statue of Lenin razed amid chants of ‘Bharat Mata Ki Jai’. This, less than 48 hours after the BJP stormed to power ending a 25-year-long Left rule.


This is exactly why Tripura was much more than just an electoral victory for the BJP. It was a hammer blow at the fountainhead of the Indian elite.

This elite that we see : the elites in the media, in academia, in intelligentsia and the arts, is ultimately beholden to the leftist ideology, and often to the communist parties. You can bet that most of them have cut their teeth in communist student organizations when they were in college. As they graduate out of college, they act as a mafia, capturing one institution after another, stuffing them with their own. Just like a statue sits over and captures a piece of land. The uprooting of that statue is bound to hurt.

The collapse of Lenin from his pedestal in Tripura sent out a wave of sadness among self-styled liberals in social media.

The Communist Regime in Soviet Russia murdered some 30 lakh people. As I wrote here, Communist Armies from Russia raped 2 million German women in a space of six months. And here they dare say that “history will not exonerate” a handful of (allegedly) BJP workers who toppled a statue of Lenin.

If anything, the world should recoil in horror that statues commemorating the brutal Soviet Communist regime still exist in India.

But, they don’t know how ridiculous they sound. Some liberal handles went so far over the edge of sanity that they ended up comparing the Buddha to the Soviet Communists.

The apostle of peace compared to the genocidal maniacs? May god give them sad-buddhi.

Side note : Hope Dalits are watching how liberals *really* feel about the Buddhism, the religion that Baba Saheb embraced.

Even mildly left-wing journalists could not help letting out a sigh.

And obviously, the rabid communists warned that Hindus will be taught a lesson, and they will use force and destroy everything when they come to power.

I don’t know why rabid communists need to issue such threats. They are already killing people and destroying properties in Kerala where they are in power, so this is understood. They don’t need to say it. We totally believe you. What is to be noted here is how destruction of a dictator’s stature has led to the meltdown of these elements, and how they have exposed themselves.

Again, this underlines just how important the Tripura victory was. The reach of the communist parties goes far beyond the handful of MPs and MLAs they have. The vast majority of political commentary generated by journalists, intellectuals, academics, artists, etc. is ultimately coming from people who are deeply infected with communist ideology. These people are the steel frame that protects the Dynasty.

Even the front page of leftist propaganda website The Wire has an eternally pinned section on “The Soviet Century.” This is the poison we breathe every day. 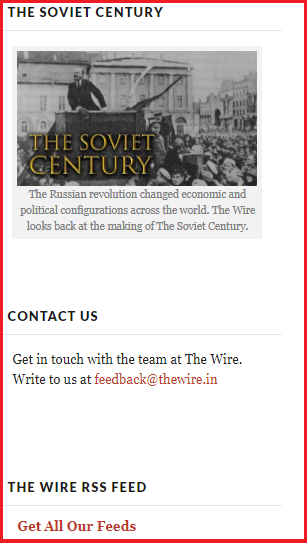 So when people of Tripura brought down a statue of Lenin, it reminded these folks in the media of the humiliating defeat of global communism. There is a lot of pain there.

Today these ‘liberals’ try to hide their true inclinations by pretending to care about “income inequality” and “human rights,” but ultimately they are their own power and rights.

Scratch the surface and their real pain comes out.

Have you ever wondered why does the global left act as an apologist for Islamism? If left-liberals really care about freedom and human rights, wouldn’t they be on the frontlines against oppressive Islamic regimes?

The explanation is actually quite simple. Both Communism and Islamism are failed ideologies that have been left behind by modernity. Hence, the unholy alliance, born out of pure spite towards the winning side. The way some evil man, who can’t handle rejection, will throw acid in the face of the girl they wanted.

If communists can’t have the world, they don’t want anybody else to have it. Might as well let Islamism destroy humanity itself.

When leftists tell you that they object to the toppling of the Lenin statue purely on grounds of rule of law, don’t believe them even for a moment. They don’t give a damn about the rule of law. Remember these images?

This from Azad Maidan in the heart of Mumbai in August 2012, just before the Independence Day.

See all those fires burning in the background? Rampant arson, people being beaten up, sexual harassment of women, *including* molestation of female police constables. The police were under pressure not to move a limb and to let the rioters do whatever they pleased. A ‘secular’ government ruled both the state as well as the center.

Did these images of actual crimes, of property being burned and destroyed, of police being stabbed by rioters, of policewomen being molested in public, bring out an outpouring of grief from our ‘liberals’? The first target of the Islamist mob at Azad Maidan was the media, yet, they did not complain. Where were the liberals worrying about India’s image in the world and wailing that history will not exonerate the perpetrators of this terrible crimes?

I’ll tell you what they were doing. They were demanding that one of the policewomen who witnessed this violence, be sacked immediately. Her crime? Did she hit or shoot any of the rioters? No, she came home and wrote an angry poem referring to the rioters as “snakes” and about how “izzat lut rahi thi”.

Leading the liberal activism was Javed Akhtar, himself a man of words.

The apostles of tolerance decided to draw a line in the sand: the one thing they will not tolerate is angry poems written by women who have witnessed a riot and molestation.

In fact, celebrity liberals Teesta Setalvad and her husband Javed Anand actually wrote an article thanking the Mumbai Police Commissioner for letting the rioters do whatever they want. This “thank you note” was proudly published in The Indian Express, possibly to showcase “Journalism of Courage.”

In case you are wondering, the female cop who wrote the “outrageously communal poem” had to apologize. How could she not? Otherwise, she would become the only person in Mumbai that day who felt the full force of our secular laws.

And worse, she would have faced the full force of the scorching moral outrage of our secular liberals. After all, as the Times of India explained:

Or as one liberal would have said, History will not exonerate the Mumbai cop who wrote a poem against the Azad Maidan riot.

She surrendered, and if today you surrender and find anything wrong with demolition of a tyrant’s stature, history will not exonerate you.