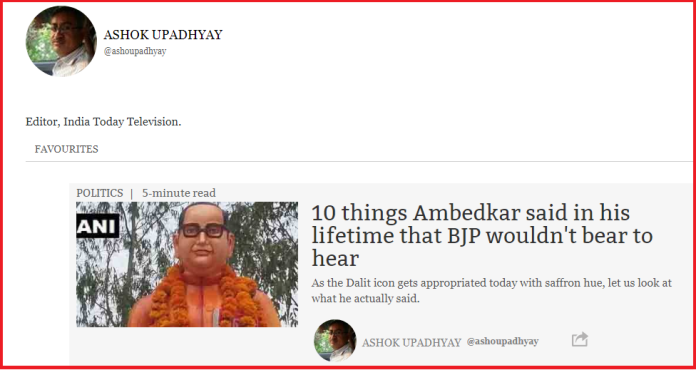 The stated aim of Editor saheb? The noble goal of taking a look at what Baba Saheb actually said. Along with the equally noble goal of making the BJP squirm over Dr Ambedkar’s quotes on Hindu society.

Excellent. My humble point is that listing merely 10 quotes can hardly do justice to the breadth of Dr Ambedkar’s genius. With a goal just as noble as that of Senior Journalist Ashok Upadhyay, I thought I would list out 10 more of his quotes.

Most of these quotes are from Dr Ambedkar’s book “Pakistan or the Partition of India.” A PDF copy may be found here. Let’s hope Indian secularists can take the heat.

(1) Which society has more social evils? Hindu or Muslim?

You hear that? All the big propaganda of the left about Ambedkar’s radical views on the evils of Hindu society and Dr Ambedkar states clearly and crisply that Muslim society is objectively worse.

(2) What is the “relieving feature” of Hindus and the “distressing” feature about Muslims?

“The existence of these evils among the Muslims is distressing enough. But far more distressing is the fact that there is no organized movement of social reform among the Musalmans of India on a scale sufficient to bring about their eradication. The Hindus have their social evils. But there is this relieving feature about them—namely, that some of them are conscious of their existence and a few of them are actively agitating for their removal. The Muslims, on the other hand, do not realize that they are evils and consequently do not agitate for their removal. Indeed, they oppose any change in their existing practices.”

Ah! What an amazing clarity of thought! Muslims have more social evils than Hindus. Hindus keep trying to reform themselves and eradicate the evils. Muslims don’t and they oppose any positive change.

(3) Which religious community adopts the “gangster’s method” in politics?

“The third thing that is noticeable is the adoption by the Muslims of the gangster’s method in politics. The riots are a sufficient indication that gangsterism has become a settled part of their strategy in politics. …. So long as the Muslims were the aggressors, the Hindus were passive, and in the conflict, they suffered more than the Muslims did. But this is no longer true. The Hindus have learned to retaliate and no longer feel any compunction in knifing a Musalman. This spirit of retaliation bids fair to produce the ugly spectacle of gangsterism against gangsterism.”

Look how wonderful. Correct me if I am wrong, dear liberal friends, but it seems to me that Dr Ambedkar is explaining the “action-reaction theory”. And he is making it absolutely clear who usually starts the violence.

Don’t leave the room just yet, dear secular liberal friends. We are just starting to have fun. Let’s see how long you can bear to keep listening.

(4) Why do Muslims carry out cow slaughter in India? Is it just to hurt Hindu sentiments?

“The second thing that is noticeable among the Muslims is the spirit of exploiting the weaknesses of the Hindus. If the Hindus object to anything, the Muslim policy seems to be to insist upon it and give it up only when the Hindus show themselves ready to offer a price for it by giving the Muslims some other concessions. Another illustration of this spirit of exploitation is furnished by the Muslim insistence upon cow-slaughter and the
stoppage of music before mosques. Islamic law does not insist upon the slaughter of the cow for sacrificial purposes and no Musalman, when he goes to Haj, sacrifices the cow in Mecca or Medina. But in India, they will not be content with the sacrifice of any other animal.”

Oh! So, that’s why Muslims in India insist upon carrying out cow-slaughter. So that it hurts the sentiments of Hindus. Just to repeat, Baba Saheb is saying that the purpose of cow-slaughter in India by Muslims is not a desire to innocently enjoy Tunday Kabab. The real purpose is to intimidate Hindus and extract … sorry… “exploit” … them to get concessions. Tough luck for my good friends at Scroll.in.

Wrong! Dr Ambedkar has this to say:

Short and sweet. And crisp. And cutting.

(6) But what about the “idea of India?” Is it right to question the patriotism of Indian Muslims?

Let’s find out what Baba Saheb has to say:

“The second defect of Islam is that it is a system of social self-government and is incompatible with local self-government, because the allegiance of a Muslim does not rest on his domicile in the country which is his but on the faith to which he belongs. ….  Wherever there is the rule of Islam, there is his own country. In other words, Islam can never allow a true Muslim to adopt India as his motherland and regard a Hindu as his kith and kin.”

Ouch! Let’s just say that if Dr Ambedkar were alive today, portals like Wire and Scroll would very likely refuse to publish his writings.

(7) How do the Muslims of India see the Hindus? Do they see Hindus as equals and treat them with respect as per Ganga-Jamuni tehzeeb?

Oh my god! Is Dr Ambedkar suggesting that Ms Sagarika Ghose is not a “realist”? How cruel!

(8) Has it ever surprised you that Muslims in India (and countries in the West where they are a minority) so passionate about human rights when Muslim majority countries have barely any rights for anybody?

Well, Dr Ambedkar has the answer:

(9) But don’t the vast majority of Muslims condemn all acts of violence? Isn’t Islam a religion of peace?

“whether the number of prominent Hindus killed by fanatic Muslims is large or small matters little. What matters is the attitude of those who count, towards these murderers. The murderers paid the penalty of law where the law is enforced. The leading Moslems, however, never condemned these criminals. On the contrary, they were hailed as religious martyrs and agitation was carried on for clemency being shown to them. ”

One Yakub Memon comes to mind. And the terrorists who were killed in Batla House encounter.  Anyways….

(10) Have you ever felt that the political class in India turns a blind eye to atrocities committed by Muslims against Hindus?

“But Mr Gandhi has never protested against such murders. Not only have the Musalmans not condemned these outrages but even Mr Gandhi has never called upon the leading Muslims to condemn them. He has kept silent over them. Such an attitude can be explained only on the ground that Mr Gandhi was anxious to preserve Hindu-Moslem unity and did not mind the murders of a few Hindus if it could be achieved by sacrificing their lives. This attitude to excuse the Muslims any wrong, lest it should injure the cause of unity, is well illustrated by what Mr Gandhi had to say in the matter of the Mopla riots.”

This is not some right-wing troll on Twitter writing about Rahul Gandhi. This is Ambedkar talking about Mahatma Gandhi.

Let’s recap: Ambedkar believes that Muslim society has more ills than Hindu society, that Muslims are more resistant to positive change, that Muslims believe neither in democracy, nor in treating Hindus as equals, nor do Muslims condemn crimes against Hindus. That Muslims can never owe allegiance to India.

Suffice to say, Baba Saheb would certainly have lost the elections for the post of JNUSU President.

Locals of the fishing suburb of Poonthura near Thiruvananthapuram attacked a team of health workers, including a doctor, who had gone to collect swab samples
Read more

While people are saying “dead men tell no story” after Vikas Dubey encounter, Md Shahabuddin narrated no tales even after jailed for years

When Rajnath Singh fought for the country but lost an election

Today is the birthday of Defense Minister Rajnath Singh. And let me tell you a story about the time Rajnath Singh lost from Mohana Assembly constituency in the 1993 elections to the Uttar Pradesh Assembly.

Sahil Parvez had stated that his father was shot in front of their house in his statement to the media. His complaint letter to the police several weeks later suddenly shifts the location, identifies 16 'attackers' by name and makes a lot of contradictory claims, read details.

The Wire retracted it after the author of the article said that she had no evidence to support her stunning claim.

Sony Liv was criticised for the promotional of its web series Undekhi that released on Friday.
Read more
Media

Notorious gangster, Vikas Dubey, who was arrested from Ujjain, Madhya Pradesh was killed in an encounter in the wee hours of the morning on Friday
Read more
Social Media

In the video titled "Journey to the centre of my brain", Sebastian is seen thanking God because 'all the people who spoke Sanskrit are dead'.
Read more
News Reports

Vikas Dubey killed in an encounter after he attempts to flee from police custody: Here is what happened

The encounter broke out between Vikas Dubey and the Uttar Pradesh Special Task Force (STF) after the gangster tried to flee upon reaching Kanpur.
Read more

Locals of the fishing suburb of Poonthura near Thiruvananthapuram attacked a team of health workers, including a doctor, who had gone to collect swab samples
Read more
News Reports

The Islamic terrorist, who unleashed terror and killed the BJP leader Wasim Bari and his two family members at their shop in Bandipora, north Kashmir has been identified by the security forces.
Read more
Opinions

“I feel free after ages. This is an end to the era of terror”, says Lallan Vajpayee who was on the hit-list of slain...

The response of the firms will be evaluated by a high-level panel and any discrepency may lead to a permeant ban.
Read more
News Reports

Irony: Priyanka Gandhi accuses Yogi govt of shielding criminals like Vikas Dubey on the same day he was killed in encounter by UP police

On a day criminal Vikash Dubey was killed in an encounter by UP police, Priyanka Gandhi slams Yogi govt for shielding criminals like Dubey
Read more