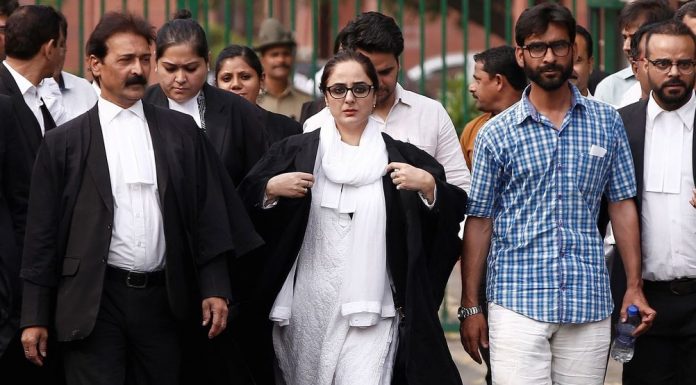 Advocate Deepika Singh Rajawat, who became an overnight celebrity in media after she appeared as a lawyer for Kathua rape and murder victim, has been removed as an advocate by the victims family.

In an affidavit filed at the Pathankot sessions court by the victim’s father Mohammad Yousaf, who is also the main complainant of the FIR, said Deepika will no longer be his advocate in the case and he is withdrawing the power of attorney issued to her.

Kathua rape case was top news for several weeks in the country, and Deepika was hailed as a hero of the case. It was argued that if Deepika Singh had not joined the case, the victim would have never got justice. And she became a superstar after she got a thumbs up from Hollywood star Emma Watson. In April this year, Watson tweeted “All power to Deepika Singh Rajawat”.

Deepika also had won the ‘Woman of the Year’ award by the Indian Merchants Chamber of Commerce & Industry Ladies Wing.

Now it has come to light that Deepika has attended only 2 hearings in the case that is being heard by Pathankot session court, according to the affidavit by Yousaf. Sessions Judge Dr Tejwinder Singh is hearing the case on a daily basis as per Supreme Court order, and a total of 110 hearings have taken place already in the last five and a half months. But the celebrity lawyer, who was supposed to lead the fight for justice of the victim, attended only 2 of these hearings.

According to Yousaf, Deepika Rajawat says she has a threat to her life in Pathankot, that’s why she does not go there for hearings. In view of this, Yousaf informed the court that he is removing Deepika Rajawat from the case. 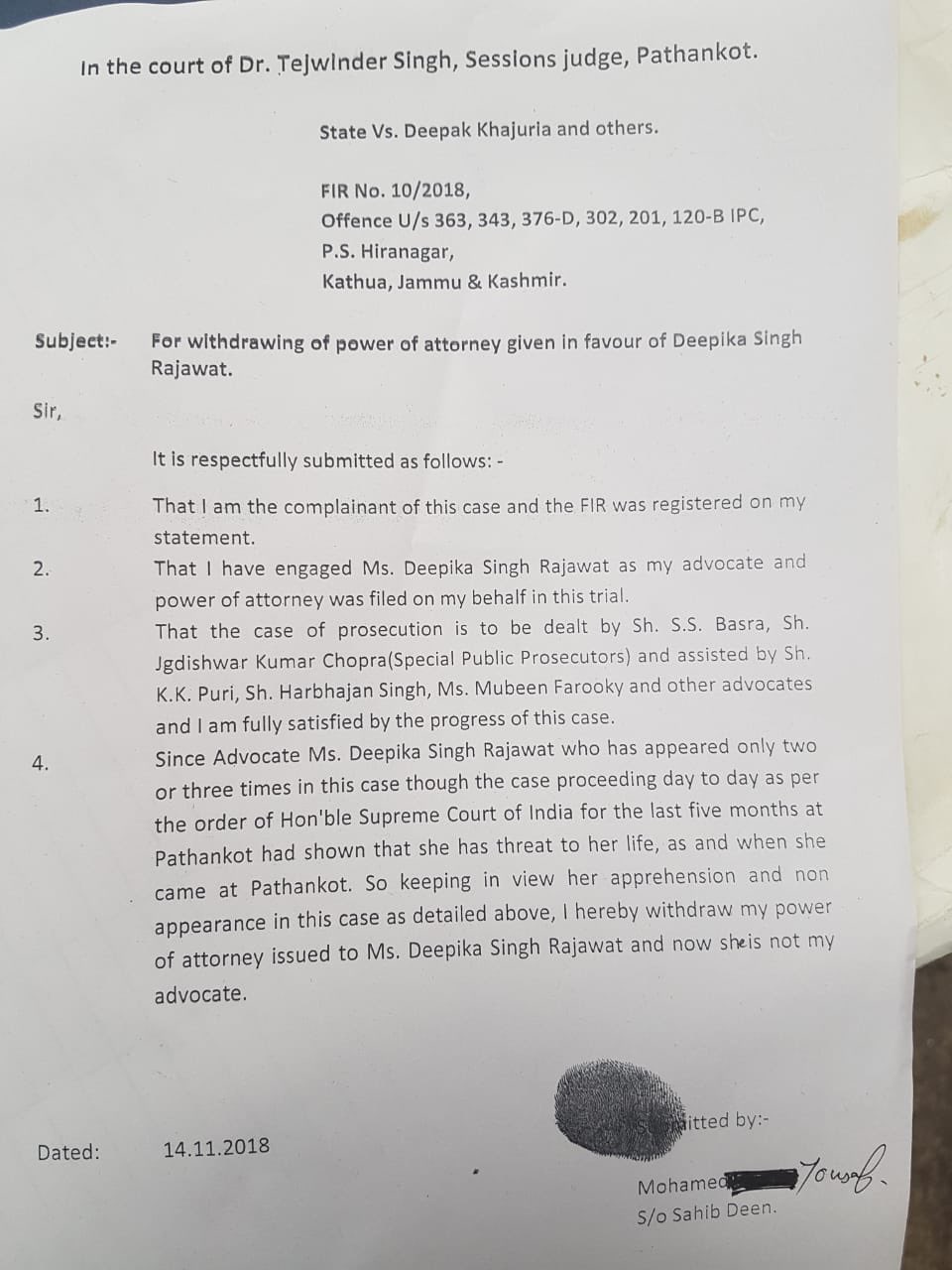 It is interesting to note that when the Supreme Court had transferred the case to Pathankot, Deepika had projected it as a victory for her. The victim’s family had requested for transfer of the case from Jammu and Kashmir, fearing threat to the family, a friend, and lawyer Deepika Singh Rajawat. After SC had accepted that request, Deepika had told media that they are happy with the decision and said that ‘now Justice will be done to the child’.

She had also expressed her happiness at the case being transferred to a ‘safe and peaceful’ place and thanked the top court for the same. But it seems due to some reason, Pathankot suddenly became unsafe for her, but the victim’s family didn’t feel any threat as they are attending the case.

Talking to The Print about her removal from the case, Deepika said that the case is handled by two very senior lawyers, and they have far more experience than her, hinting that she is really not needed in the case. She also said that it is not possible for her to go to Pathankot every day as it will affect her practice and she also has family responsibilities.

It may be noted the Kathua rape and murder case is a criminal case, and as per law, the state fights the case against the accused. The victim need not appoint any lawyers. But often victims choose to engage private lawyers if they feel that the public prosecutors may not be able to present the case properly. But even in such cases, the private lawyers work only as assistants of the public prosecutors, they can’t work in the case independently.

This is not the first controversy associated with the fight for justice to the victim of the crime. After the incident had come to light, left Wing activist Shehla Rashid had collected funds for the legal aid of the girl, and she herself claimed to have received more than ₹40 lakh from donors. But according to reports, the victim’s family didn’t receive any of this fund. The family was having to sell livestock to provide for travel expenses to attend the trial at Pathankot, the reports said.

Earlier, advocate Talib Hussain, who was a prominent activist demanding justice for the victim, was accused of rape by two women. He is also accused of domestic violence and attempt to kill his wife over dowry.