OpIndiabringing the \'right\' side of India
More
HomeEconomy and FinanceDemonetisation – A step towards 'Charitra Nirman'
Economy and FinanceEditor's picksFeaturedGovernment and PolicyOpinions
Updated: 6 November, 2018

Demonetisation – A step towards ‘Charitra Nirman’

For a Nation that worships Lakshmi, the Goddess of Wealth, we believe in radial prosperity, a clear departure from the philosophy of the Left that convinces its consumers that poverty is good. However, we also believe this prosperity should not be accessed at the cost of others.

If there is an all-pervasive habit in India, it is the temptation to indulge in corruption. Before you decide to abandon the discussion on the assumption that you have nothing to do with corruption, remember all the times you ‘bribed’ the traffic police to let you go for jumping a signal, availed sick leave to tend to other businesses or lied through your teeth to your parents as a teenager.

All these instances and several others are a form of corruption, that we have participated in without even realising that these seemingly innocuous activities result in erosion of our character, our moral index and eventually corrode the moral benchmark of the society and nation. It is never too late to accept that we engage in dodgy activities because we know we can “get away” with them.

November 8, 2016: The Prime Minister of India, known for his administrative grasp, decided to reset our dishevelled morals, by announcing demonetisation of the currency of denomination INR 500 and INR 1,000. These currency bills formed 86 per cent of the currency in circulation. We all saw how affected parties, especially those who had stashed cash earned through unruly means, rushed to buy gold, air tickets, petrol, swanky vehicles, and the works. The rush to convert cash into high-value assets was a telling example of the cesspool of black cash that had accumulated in the nation where 14.8 per cent of the population is undernourished.

One of the biggest criticisms faced by demonetization is that it was not forward-looking. There were no devices that were introduced to check the flow of black cash; the announcement just aimed at extinguishing the existing stock. I can understand masquerading scholars using this logic as a tool for political criticism; I find it worrisome that trained economists too resorted to this anaemic argument, mainly because these economists failed to see the behavioural impact of demonetisation on the common man. The sudden shock is expected to send a strong message to the citizens of India, regarding zero tolerance to corruption and that the State apparatus has the capability to coerce discipline if citizens go astray.

In Ramcharitmanas, Tulsidas writes “बोले राम सकोप तब, भय बिन होय न प्रीत।।” – In the absence of fear of punishment/consequences for indiscipline, there is little appreciation of resources. Demonetization was an announcement to spell both, fear of consequences and power of the State with respect to corruption. India was made to experience the potential loss that the State could impose for hoarding cash, repercussions such as income tax notices for undisclosed sources that lead to the sudden deposit of high amounts cash. For decades, we have seen the State as a toothless tiger which has no authority or agent to check the unchecked corruption that thrived right under its nose.

The Prime Minister literally told the Nation at prime time, that the State is still the boss and it is high time the fortresses of corruption ceded ground to honest, hard-working citizenry.

Moreover, stakeholders of the parallel economy have been caught off-guard. They were lead to believe that they can get away with all underhand dealings and continue to do so endlessly. Post demonetization, there is a palpable unrest within multiple groups. They are unsure about the next move of the State to expose the corrupt, which nudges them to avoid indiscipline.

The Khao aur khaane do culture had become a way of life for the nation, and we clearly needed action to control this trend from becoming the ‘only’ way of doing business in India. For a scam surplus nation, it is no secret that grey transactions had found their way deep into social structures, including education, food distribution and healthcare. We cannot afford to have an entire generation of citizens see no wrong in corruption and believe that they could get away with a dark trail of activities by wearing the mask of honesty. They needed to be communicated, that it is not enough to file annual income tax returns – it is equally important to pay the right amount of tax. Demonetization was followed by the launch of Goods and Services Tax (GST), a cent per cent online platform – another strike on those who used human intervention as a means to achieve wanted ends.

For a Nation that worships Lakshmi, the Goddess of Wealth, we believe in radial prosperity, a clear departure from the philosophy of the Left that convinces its consumers that poverty is good. However, we also believe this prosperity should not be accessed at the cost of others. Demonetization should be viewed as a long-term reform that will eventually push the citizens of today and tomorrow towards building character building. Charitra Nirmaan is a critical part of every human being, and the State cannot absolve its responsibility from contributing to the same. 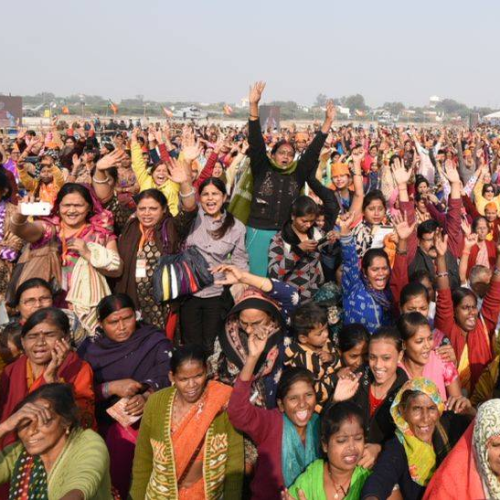