Sadhvi Pragya had to take back her words because the BJP understood that their core voter would not rally behind any perceived insult to a police officer who died for the nation.

In less than 24 hours, Sadhvi Pragya, now the BJP candidate from Bhopal, took back her words on Hemant Karkare. The BJP’s core voter simply would not stand for such language against a man who gave his life defending the nation against terrorists. Does it not say something good about the core voter of BJP?

Now, here is the man that Sadhvi Pragya is up against in Bhopal. 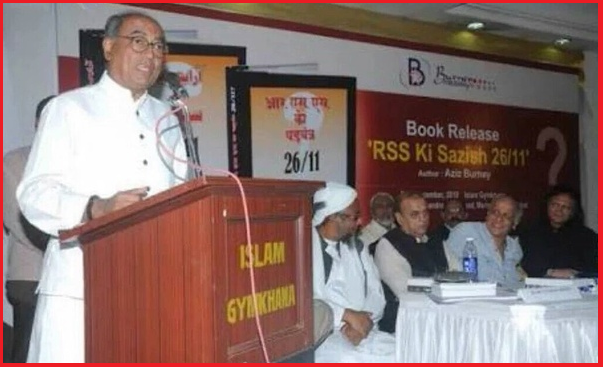 A veteran Congress leader, a two-term Chief Minister, releasing a book that asks whether the 26/11 terrorist attack was a conspiracy by the RSS! Could there have been a worse way of undermining India’s stance against Pakistan sponsored terrorism on the global stage? Not surprisingly, Pakistani media took great joy in publicizing this event worldwide, playing it up as “proof” of their innocence.

But Digvijay Singh never apologized for something as terrible as this. What does that tell you?

This article is not about politicians or parties. This post is about people. Politicians do not exist in a vacuum. Politicians cater to their supporters. And different parties have different support bases.

So why did Digvijay Singh never apologize? Simple. Because the Congress Party calculated these remarks would actually be well received by their core voter or at least a huge section of their core voters.

This is hardly an isolated incident and hardly limited to the Congress Party. Everyone remembers how leaders from ‘secular’ parties repeatedly referred to Lashkar terrorist Ishrat Jahan as an “innocent college girl”.

Another great ‘secular’ leader. The formidable Pawar Saheb is a veteran of politics, a prodigy who became CM of Maharashtra at the age of 37 years. Does anybody really think Pawar Saheb would not understand the consequences of such statements? No, the reason such views were expressed is that ‘secular’ parties understand that it plays well with their core voter.

Or you could take Sushil Shinde, who declared in 2013 that BJP was a terrorist organization. At the time, Shinde was Home Minister of India.

In 2013, the BJP had over one hundred elected MPs and was ruling several major states. The BJP has been embedded in government at local, state and central levels for decades. India’s Home Minister stating that BJP is a terror outfit is practically like India officially declaring itself a terrorist state. Truly unprecedented in the history of the world.

Another disaster for India’s global stance against terrorism. And Shinde never apologized either.

But it played well with the core voter of secular parties. That’s why they said it. Why else would so many ‘secular’ leaders question the sacrifice of Inspector Mohan Chand Sharma in the Batla House encounter? One of the people who spread lies about Batla House encounter is now the Chief Minister of Delhi!

This is what I have been saying. India’s secular politicians know that their base will reward them for such remarks.

Not only do ‘secular’ politicians know that their base will reward them, they also understand exactly where to make such statements.

I am only going to make passing references to the small fry : a number of MPs and MLAs from secular parties actually wrote to the President of India requesting mercy for terrorist Yakub Memon who had been sentenced to death for his role in the Mumbai serial blasts that killed over 250 innocent Indians.

Perhaps, even more shockingly of the politicians who spoke in support of Yakub Memon were based in Maharashtra themselves. They weren’t hurting the feelings of their base, they were catering to it.

This is a tweet from last year, from the Congress official handle

Mentioning by name “activist” Vernon Gonsalves who has been convicted and served a jail term in a case related to left-wing terrorism.

By the way, did you know that within weeks of the November-December 2018 state elections, the new Congress government decided to drop murder charges against certain people in Chhattisgarh? Among them, the spouse of a top editor who founded a prominent left-wing website that is deeply wired into the secular propaganda machine.

Sadhvi Pragya had to take back her words because the BJP understood that their core voter would not rally behind any perceived insult to a police officer who died for the nation.

But ‘secular’ parties expect no such backlash from their voters. Rather they expect rewards. Why? Who is this core voter of ‘secular’ parties that would rather give a clean chit to Pakistan and blame 26/11 on the RSS? You tell me.

OpIndia Staff - January 27, 2020
Fr Varghese Vallikkatt, the spokesperson of the Catholic Church Bishops Council, has stated that the cases of women from South India being used as sex slaves in war-torn nations like Syria and Afghanistan are a reality.
Read more

drishtikone - January 27, 2020
Quite simply, Kamra is churning out bigoted and profane abuse packaged as comic fodder against Sadhguru

There were always ‘red flags’ about Arvind Kejriwal: Munish Raizada to OpIndia while talking about his web-series exposing AAP

From The Wire to everything else, the Anatomy of an Islamist: Into the mind of Sharjeel Imam, mastermind of Shaheen Bagh

“You are a liar Mr George Soros”: Savio Rodrigues hits out on billionaire who committed USD 1 billion to ‘fight nationalism’ in India

Threats, water supply cut and no puja being allowed: How Hindu families are being harassed by Christians in a Mumbai building

Writer of Karan Johar’s next movie Takht, Hussain Haidry, turns out to be an Islamist: Read how

Mumbai police issue notice to Christian families of a colony for harassing Hindu families, not allowing them to perform puja

Based on Quran, cannot be challenged over laws based on Constitution: Here is how AIMPLB is batting for Nikah Halala and Polygamy

There were always ‘red flags’ about Arvind Kejriwal: Munish Raizada to OpIndia while talking about his web-series exposing AAP

Deepak Chaurasia, who was assaulted at Shaheen Bagh, gives befitting reply to The Wire employee who downplayed attack