Although Aaj Tak has clarified on the issue of old date seen in its footage, both India Today and Aaj Tak are still silent on the main issue with their sting, that the guys they are claiming to be ABVP activists are actually not ABVP members. 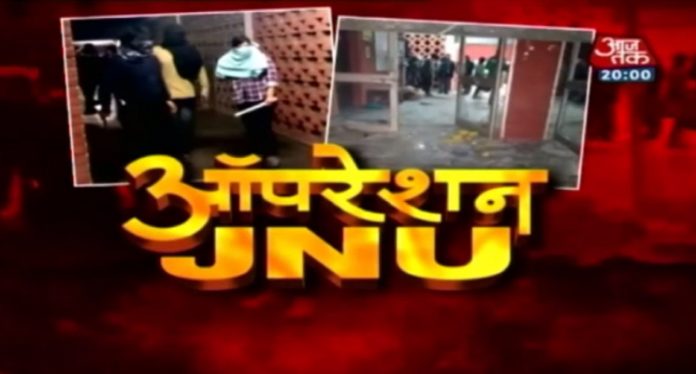 After questions were raised on authenticity of the sting operation done by the India Today group on the JNU violence, it’s Hindi News Channel Aaj Tak has issued a statement clarifying one of the issues raised about the report. Yesterday, India Today and Aaj Tak channels had aired a highly doubtful sting operation where 2 youths claiming to be ABVP members had ‘revealed’ on camera that ABVP had planned the violence in JNU. The sting operation was aired by India Today right after the Delhi police had held a press conference and implicated several Left students, including the JNUSU president Aishe Ghosh as suspects in the JNU violence.

In one clip of sting video showing JNU student Akshat Awasthi speaking, a timestamp showing the date 22 October 2019 was seen. This implies that the recording was done almost three months ago, while the violence in JNU happened just one week ago. This date was seen in the report aired by Aaj Tak, while it was hidden by on-screen graphics on India Today.

This afternoon Aaj Tak posted two tweets saying that the clip showed old date because in the camera used to record that video, the settings were not updated. This had caused an understanding, for which they express regret, they tweeted. Aaj Tak also said that in October 2019 there no incidents of violence took place in JNU, therefore on 22 October such reporting could not have been done. In the clip with the old date stamp, Akshat is heard saying that they used masks during the violence seeing the left groups using the same earlier.

Although Aaj Tak has clarified on the issue of the old date seen in its footage, both India Today and Aaj Tak are still silent on the main issue with their sting, that the guys they are claiming to be ABVP activists are actually not ABVP members. The ABVP has denied that they are members of the association. After that, India Today anchor Rahul Kanwal had shared a clipping from a Hindi newspaper claiming that Akshat was seen in an ABVP rally. But the Jansatta news that he himself posted had said that the photograph where Akshit is seen was from a protest by JNU Student’s Union, and the report didn’t mention ABVP. The same incident was reported by several media houses, including India Today itself, saying that it was a JNUSU protest against fee hike in JNU, and none of them mentioned JNU. In fact, the reports say that the minister of state in HRD ministry Ramesh Pokhriyal ‘Nishank’ was blocked by the protesting students for several hours, and ABVP members are unlikely to do that given their affiliation with RSS.