Delhi Election Results: Here is all you need to know about 7 important Muslim dominated constituencies

One of the most important factors in any highly contested election is the Muslim vote. And the Delhi elections are no different. In this report, we shall focus on those constituencies where the fate of the parties is decided by the Muslim vote. 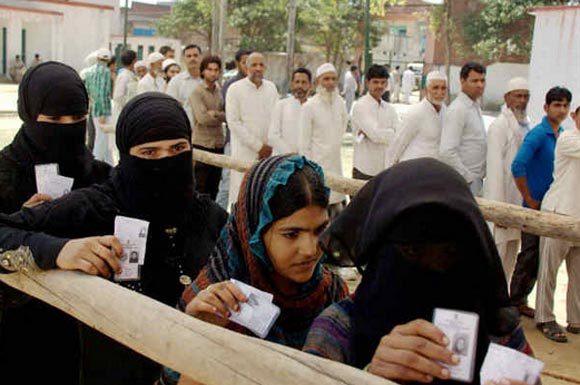 The Delhi election results are finally out today. After the end of a highly polarized campaign, the fate of the contesting parties will be known by the end of the day. The fight is expected to be a bipolar contest between the BJP and the Aam Aadmi Party with the Congress nowhere in the picture. One of the most important factors in any highly contested election is the Muslim vote. And the Delhi elections are no different. In this report, we shall focus on those constituencies where the fate of the parties is decided by the Muslim vote.

Since 1993, the Muslim-majority Okhla constituency has never been won by a non-Muslim. It is the same constituency that had elected Amanatullah Khan from the AAP as their representative in 2015. The AAP leader was recently spotted leading riots in the national capital against the Citizenship Amendment Act and was also booked by Delhi police. He contested from the same seat again this year.

Okhla is also the most controversial constituency in terms of anti-CAA riots recently. Shaheen Bagh, where Islamists have laid siege is also a part of the Okhla constituency. At Shaheen Bagh, 2 infants have died due to the protests and the harsh weather conditions and several hate-filled, anti-Hindu slogans like ‘Jinnah Wali Azadi’ have also been raised. The mastermind of Shaheen Bagh protests, Sharjeel Imam, is in police custody after he made seditious statements like trying to cut away Assam from the rest of India. In fact, Sharjeel Imam was seen making provocative statements at a separate event with AAP’s Amanatullah Khan standing right beside him.

Interestingly, even Batla House forms a part of Okhla constituency.

The Okhla Constituency has about 65% Muslim votes as per a report in India TV news.

The BJP has fielded Braham Singh from the constituency. He was the BJP’s candidate in 2015 as well but had secured just over 23% of the votes last time. The Congress, meanwhile, has fielded Parvez Hashmi who has won the seat four times in the past. Shaheen Bagh, which has featured prominently in these election campaigns, lies in this constituency and so does Jamia.

Seelampur is an Assembly seat in the North-East district of Delhi and a Muslim dominated neighbourhood. The area was set up in the Emergency-era to rehabilitate Muslims rendered homeless after their homes were demolished in the north and central Delhi.

In the run-up to the Delhi Assembly polls, Muslim-dominated areas of Seelampur saw unprecedented violence led by Muslim mobs to protest against the Citizenship Amendment Act.

Delhi was the epicentre of the anti-CAA riots, which later spread to different parts of the country. The Muslim mob in Delhi’s Seelampur had unleashed the violence against public infrastructure and pelted stones at the police injuring many of them. The violent protestors had even attacked school buses in Delhi’s Seelampur area.

There have been serious allegations against Delhi Chief Minister Arvind Kejriwal-led AAP for instigating riots in Delhi by inciting Muslim mobs against the Modi government ahead of the Delhi assembly elections under the guise of protesting against the Citizenship Amendment Act, which has nothing to do with Indian Muslims.

Shockingly, Aam Aadmi Party led by Arvind Kejriwal has given tickets to people who are associated with instigating riots in Delhi during the anti-CAA riots. AAP has fielded Abdul Rehman to contest from New Delhi’s Seelampur constituency in upcoming elections. Rehman along with ex-Congress MLA Mateen Ahmed has been named in an FIR by Delhi Police for ‘provoking the crowd’ to join the protests.

This Assembly Constituency, too, has never been won by a non-Muslim and is another of the Muslim dominated constituency of Delhi. Shoaib Iqbal had held the seat from 1993 to 2015 before conceding it to Asif Ahmed Khan of the Aam Aadmi Party. This time around, Shoaib Iqbal is contesting from the AAP while the Congress has fielded Mirza Javed Ali. The BJP’s candidate for the seat is Ravindra Gupta.

Muslim voters are likely to play a decisive role in determining the result in this constituency, where they reportedly form around 40 percent of the electorate.

It is pertinent to note that Hauz Qazi forms a part of Matia Mahal constituency. In Hauz Qazi, in July 2019, the Hindu community came under siege by a Muslim mob. Their temple was vandalised and for several days, communal tensions prevailed. The locals had also claimed that while vandalising the temple, the Muslim mob had urinated on the idols and the AAP MLA from the area did nothing to help the Hindus and was, in fact, favouring the Muslim mob.

No non-Muslim has ever won this Assembly Constituency. Haroon Yusuf from the Congress party held the seat from 1993 to 2015 while the Aam Aadmi Party’s Imran Hussain succeeded in snatching the constituency away from the Congress. Hussain had won almost 60% of the votes last time around while BJP’s Shyam Lal Morwal had managed only 24.29% vote share. In 2020, the Congress has again fielded Haroon Yusuf while the BJP has gone with Lata Sodhi. The AAP has chosen to field the incumbent from the seat, Imran Hussain.

Rithala, Shahdara, Seemapuri, Babarpur and Mustafabad — have Muslim population between 30 percent and 40 percent. Over the last seven years, AAP has successfully weaned away Muslim voters, who have long been considered a traditional Congress vote bank.

In 2015, when AAP had swept the Delhi elections winning 67 seats and giving away only three to BJP, Mustafabad was the only Muslim-dominated seat that was won by BJP.

Babarpur has a significant Muslim population, between 30 to 40 percent. However, the BJP has won it four times in the past. The seat is currently held by Delhi Cabinet Minister Gopal Rai. He had defeated BJP’s Naresh Gaur by a margin of almost 36,000 votes. This year, it’s again a contest between Rai and Gaur while the Congress party has chosen to field Anveeksha Tripathi Jain.

It is pertinent to note that in June last year, a Delhi court framed charges of rioting, unlawful assembly, murder, the disappearance of evidence, mischief, dacoity, murder and conspiracy against 12 persons accused in the 1984 anti-Sikh riots case in the Babarpur area in northeast Delhi, where seven persons died.

The Assembly Constituency has a Muslim population of over 40 percent. The seat was won by Alka Lamba in 2015 for the Aam Aadmi Party who is now contesting from the Congress party. Meanwhile, Parlad Singh Sawhney, who had won the seat as a Congress candidate four times, contested the elections as the AAP candidate in 2020. The BJP has given its ticket to Suman Kumar Gupta.