Lies, manipulations, insults – What Indian media gives to our Army NDTV is known to be a master of spin, lies and deceit. Yesterday NDTV went on to use a martyred soldier to make a political point, that too by misrepresenting facts.

22 year old Captain Pawan Kumar laid down his life fighting militants holed up inside a government building in Pampore area on the Srinagar-Jammu National Highway. He hailed from Jind area in Harayana and had joined the Army only three years ago and had recently taken part in two successful operations where three militants were killed.

This is how NDTV chose to cover the death of this brave soldier: The post, written by Vishnu Som, did not miss any chance in using a martyred solider, putting words and thoughts into his mouth, to make a political point. Som claimed that, based on the late Captain’s facebook post, one could clearly say that “the debate around ‘azadi’ speeches and sedition didn’t really bother him“. What was the FB post? This:

The soldier makes no mention of JNU or sedition or any such thing, but Vishnu Som is not one to feel ashamed of using a martyred soldier for his political motives. So late Captain Pawan Kumar automatically becomes someone who wasn’t bothered by “sedition”. This is how narratives are created.

Further, there was an untruth in the above post. Vishnu said that the late Captain was “from JNU”. This obviously is to show people that patriotic soldiers can also graduate from JNU so JNU is not the anti-national den you imagine it is. So was the Captain really “from JNU”?

Nope. He only had a graduation degree from JNU, as all military officers who graduate from the  National Defence Academy (NDA) have under a special arrangement. He probably never stepped into JNU his entire life. We say probably because unlike Vishnu, we do not wish to use the a martyred Captain for any narrative.

Once this blatant lie was pointed out to Vishnu on twitter, he asked folks to “settle down” since he had changed the headline:

Settle down folks. The headline has been updated. Story the same. Don’t dishonor his memory with your hate for JNU. https://t.co/ZMJULbvJVj

So Vishnu Som used a martyred soldier to make a political point, and lied to buttress that point. Guilty on 2 counts. What happened next will shock you. Instead of being apologetic, Vishnu was on the aggressive. This was how he retorted to a twitter user who questioned him: 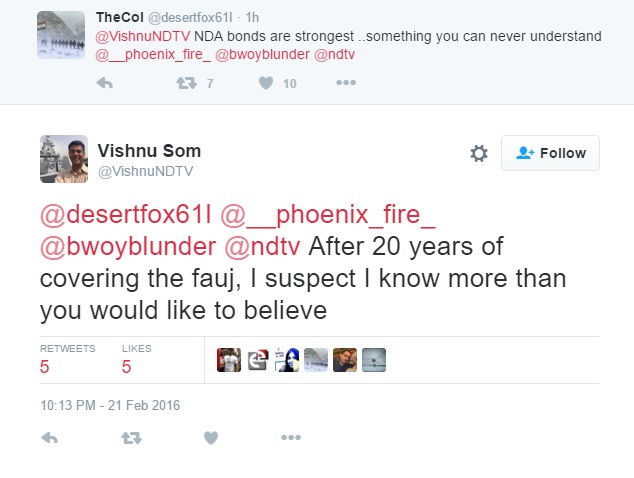 He had addressed this reply to @desertfox61l (whose military affiliations are clear from his bio). Vishnu Som may not have been knowing he was addressing a military veteran. But a reply came from the other tagged account @__phoenix_fire_ :

This handle informed Vishnu that he indeed was associated with the army. At least now one would expect Vishnu to talk respectfully, especially since he was been caught on 2 grounds already. But no:

Vishnu chose to make a snide remark on a soldier that he may not have been competent to be in the army over 10 years. And pat came the reply that he was in fact not an ex-army man, but still served in the army.

“Behave like an Officer ! Buoy”? That is the respect he has for army-men. He went on to claim the person could be a “pretend soldier”.

Not only does Vishnu Som misuse the words of a martyred soldier to suit his political agenda, he lies about his education, and when caught, instead of being on the back foot goes ahead to talk in brash boorish language to a serving army officer.

At a time when the credibility of NDTV is at the utmost low, such poor behaviour from a NDTV journalist adds to the fire. It is no surprise that NDTV has plummeted to the bottom as far as TRP ratings are concerned.

If NDTV has shown the way, Firstpost cant be far behind. Sandipan Sharma has been the author of previous pieces when he “mistook” a fake website for Baba Ramdev’s official site and when he declared Bajrangi Bhaijaan as communal, because Salman says Jai Shri Ram, and not Khudahafiz.

Sandipan Sharma now, has followed in the foot-steps of Vishnu Som. Going one step ahead, he claims that Captain Pawan Kumar “had studied at JNU”.

As explained above, NDA pass-outs get a JNU degree by virtue of a tie-up between NDA and JNU. This by no means can be construed as an NDA pass-out having studied at JNU. Yet Sandipan says he had studied at JNU, with the same intention: to fight the perception that a nationalistic minded person can also be from JNU.

Not just that, in the pathetically written article, a style that has now become his hallmark, Sandipan goes on talking politics and bashing Haryana BJP instead of giving some respect or farewell to the martyr, which ironically is the question he starts with in the same article!

The state of Indian media is such that they feel absolutely no shame in twisting, lying and misrepresenting facts/views of martyred soldiers to suit their narrative. This media is the breed of vultures which would put even real vultures to shame.