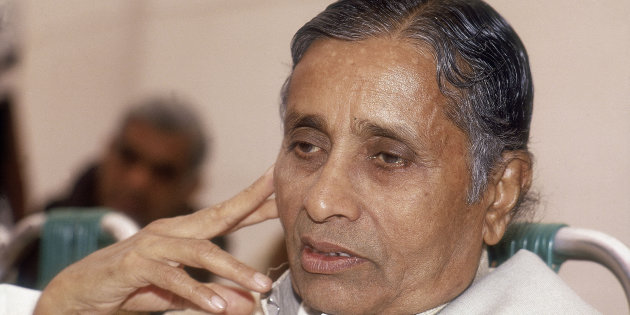 Patwa was amongst the first generation of Bharatiya Janata Party (BJP) leaders who tasted power as the Congress party weakened in the aftermath of the 1975 Emergency. Like many others in this generation, Patwa learnt the ropes of running a government that hard way. This generation often criticized Congress leaders for lack of probity in personal and public life, but often fell short of the high standards set while in opposition, finding it tough to change the institutional political set up so tightly controlled by Congress since 1947.

Yet, Sunderlal Patwa and many of his generation were instrumental in creating an alternative to the Congress. In Patwa’s travails as Chief Minister, BJP found the organizational strength in Madhya Pradesh to build a strong counter to the Congress party. In Patwa’s successes and failures lay the foundations of the spectacular electoral run BJP has had in Madhya Pradesh since 1989 in Lok Sabha elections and later in the Assembly elections. Patwa, like his many Jan Sangh and BJP peers, was one of the architects of the modern day BJP, which is equipped to confidently govern learning from the experiences of men like Patwa.

Born in 1924 in Kukdeshwar, a small town in the North West corner of MP in Mandsaur district, Patwa was part of the Rashtriya Swayamsevak Sangh through 1940s. He joined the Jan Sangh in 1951 when it was established as a political party, and continued holding various positions in the set up till 1977. He was first elected to the MP assembly in 1957 and won three terms. In 1977, when the Janata Party came to power in the center and in various states deposing Congress, Patwa was included in the Working Committee of this multi-party coalition. He briefly served as the CM for a month in 1980, after Virendra Saklecha, another Mandsaur district leader, resigned from the post due to infighting within various Janata factions.

Patwa’s first term was cut short and President’s rule imposed after Janata coalition fell through in Delhi. Congress then returned to power in June 1980 and Patwa became the leader of the opposition in the assembly. It took ten years for the BJP to come back to power in Bhopal, and Patwa was sworn in as the first BJP CM of the state in March 1990.

This was an extremely turbulent political period for much of North India. The Mandal-Mandir politics was at its peak while the economic growth stuttered. Patwa brought much of the same approach to the office what Janata Party had done in Delhi in 1977. He started off by identifying administrative constituencies which were close to the institutional Congress set up and started dismantling them all at once with a missionary zeal.

In the first year of his rule, Patwa transferred nearly 50,000 government employees across the state. MP was then the largest state in India – Chhatisgarh was yet to be carved out – and widespread geographic movement at such a large scale created a lot of resentment in administrative circles. The previous Congress regimes under Arjun Singh, Motilal Vora, and Shyama Charan Shukla had all been notorious for running a transfer-posting industry. In a politically charged environment, where government employees were used to manage their own postings, this move almost immediately backfired on Patwa, with the administrative machinery coming to a grinding halt in many districts.

Unfazed, Patwa continued with his agenda and took up the mantle of cleaning up the encroachments in large cities in MP. He found a committed deputy in Babulal Gaur, then Law Minister and later to be the MP CM in the post-Patwa era. The duo proceeded to act on illegal encroachments in all large cities, especially focusing on Indore and Bhopal where the BJP had tasted its initial spectacular Lok Sabha success. Gaur was dubbed as Bulldozerlal by the local media and Madhu Dandavate, then Union Minister, apparently remarked on one of his MP visits that Gaur had made MP worse than Turkman Gate – a reference to the demolitions carried out in Delhi during the Emergency period.

Patwa was also accused of moving away from his characteristic soft and simple lifestyle when he organized a grand function for his father’s death anniversary. This function was attended by most state ministers and Patwa even managed to get the then Prime Minister VP Singh. India Today published a memorable picture of Patwa driving Singh personally in an open top vintage car to allege impropriety on part of Patwa. He also battled local BJP leaders who accused him of being too close to RSS ideology and being a remote control of the Sangh. In a surprise move, Patwa shot a long letter to a local newspaper Swadesh, otherwise friendly to the BJP, and made a counter accusation of the newspaper begging for government ads.

Amidst such factional wars and pressure from Congress directly in assembly and indirectly through the state government employees, Patwa continued to be on shaky grounds for much of his 33 month CM term. These controversies took the sheen away from what was his biggest achievement – clearing large MP cities of ghettos which had become nerve centers of communal riots.

From 1987 until 1993, several MP cities witnessed continuous rioting, violence, and communal strife. Many cities used to be under curfew for extended periods of time disrupting day to day life. The situation was especially bad in Indore in 1988 and 1989. As CM, Patwa asked Rakesh Asthana, the then Superintendant of Police (SP), Indore to deal with the rioters with a strong had. One of the key protagonists of rioting in Indore was Bala Beg, a local leader in the ghetto of Bombay Bazar. Asthana with the support of Patwa, worked hard to rid Indore of this ghettoization and bringing calm and peace to the city. Asthana who will take over as the next chief of Research and Analysis Wing (R&AW), is said to have been appointed to the top intelligence body by PM Narasimha Rao on behest of Patwa himself.

Patwa faced a second dismissal in the wake of rioting after the Babri Masjid demolition in 1992. President’s Rule was again imposed in the state and it continued for a year. During this period, BJP lost out on some of the goodwill from the 1990 assembly election, and Digvijay Singh stormed in power as the Congress CM.

Patwa, after being out of political reckoning for a while, decided to contest the 1997 by-poll to the Chhindwara Lok Sabha seat, vacated by Kamal Nath’s wife so that he could get reelected as a Member of Parliament after his name was cleared in a hawala case. Patwa defeated Kamal Nath in his stronghold, the only time BJP has won this Lok Sabha constituency since 1951. However, Patwa failed to retain this seat in 1998 Lok Sabha election, losing to Nath and then moved to the nearby Hoshangabad seat in 1999 to be elected as a Member of Parliament for a second time.

Patwa was made a Cabinet minister in the Atal Bihari Vajpayee government. He held various portfolios in this government – Rural Development (12 months), Chemicals and Fertilizers (2 months), and Mines (10 months). However, through this tenure, Patwa could not adjust to the Delhi bureaucracy and was his working style was criticized as heavy handed. Frequent portfolio changes did not help, and amidst rumours that Vajpayee was about to drop him as a non-performing minister in 2001, Patwa chose to resign himself on health grounds before the September 2001 Cabinet reshuffle.

He then returned to MP, where BJP was rebuilding itself as Digvijay Singh continued his second term as the CM. He decided to stay away from day to day politics, even as BJP won the 2003 assembly election. Babulal Gaur, once seen as a Patwa protégé, was appointed the Chief Minister after replacing Uma Bharti subsequently. Patwa however never made the lost ground, and decided to retreat quietly from the political scene.

As a party patriarch, he continued to meet the local cadre and be involved in discussions and debates on public issues. As late as a week before his death, Patwa had met local BJP leaders to accept a memorandum on demands of village heads.

Sunderlal Patwa will probably never find a space in the pantheon of indispensable BJP leaders when the party history is written. But his contribution to the party in building MP as a strong fortress is significant. Patwa took upon himself several blemishes and fronted many lapses as BJP learnt to transition from an opposition party to a ruling one. His personal battles, rooted in a hard, uncompromising Sangh ideology opened the path for a more pragmatic, political face for the BJP in Madhya Pradesh.

As in his long political life, Patwa remains a quintessential party man in his death.

a Pune based IT professional with keen interest in politics