Did the Rail Minister hint at a conspiracy to target Narendra Modi’s rallies? 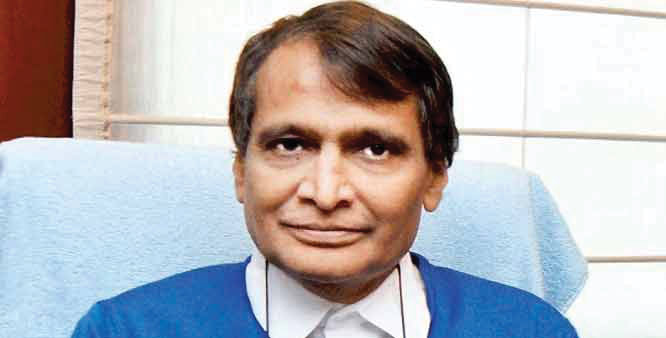 Recently there have been a few unfortunate accidents that have plagued the Indian Railways. While negligence of the railway authorities coupled with crumbling infrastructure cannot be ruled out, many on social media started speculating about a possible sabotage angle especially in and near Kanpur where two accidents took place within a month.

This speculation looked like turning into a reality after Navabharat Times reported that at Mandhana station between Kanpur and Faridabad, track clips and fish plates were found removed. Additionally in Kanpur, there was an effort to cut the track itself:

Soon many started speculating about a possible terror aspect:

Terror angle too shd be probed too.. no? https://t.co/S84exZmX9E

Some people then connected the dots between the accidents and Modi’s rallies. Incidentally the foiled sabotage attempt comes at a time when PM Modi is all set to address a massive rally in Lucknow today. Also, the accident on 20th November, which had left over 140 dead, had occurred on the day when Modi had addressed a rally in Agra.

@AshDubey_ Remember the last derailment which left 150 dead? PM had a rally on the same day. Can’t be a coincidence for sure

This theory might have ended up as an elaborate conspiracy theory had Rail Minister Suresh Prabhu not ret-weeted the link between these sabotages with Modi’s campaigning in the state: 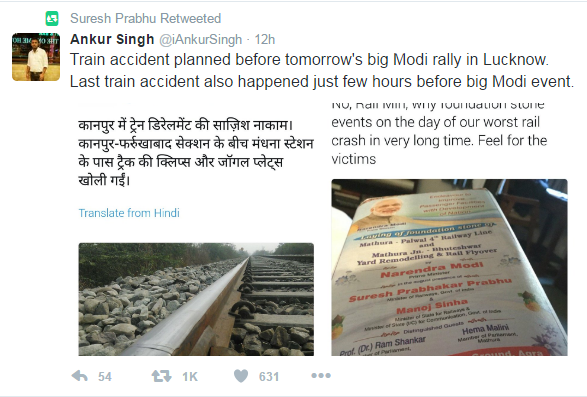 Suresh Prabhu has been using Twitter very effectively and we have all seen how he has helped many passengers in distress who tweeted to him. He is surely among the ministers who know how the platform works. So should one treat this re-tweet as an endorsement? Or even a subtle hint at what he suspects?

Does it mean that the Railway Minister is not ruling out the possibility that some unlawful elements targeting railways to target the Prime Minister? This warrants a serious inquiry to ascertain who is backing such elements.