OpIndiabringing the \'right\' side of India
More
HomeOpinions'Intolerance gang' is now officially terrified of dissent of the 'amateurs'
Opinions
Updated: 3 February, 2017

‘Intolerance gang’ is now officially terrified of dissent of the ‘amateurs’

This quote from the Mahatma is forever so relevant that the only way it could have been more awesome is if Gandhiji had actually said it.

Think back to the golden days of UPA 1. The ecosystem was thriving (well, it still is, barring minor inconveniences). Intellectuals, filmmakers, journalists, academics, etc. all flocked to the fountainhead in Lutyens Delhi. Money, fame, awards and deals for everyone!

Amid the glitz, the glamour and the glare, the intoxicated party animals did not notice that the ground beneath their feet was shifting.

India was changing. Small isolated voices of dissent were springing up over this new thing called the internet. These voices belonged to regular people who were itching for an outlet for their views. These people wanted to challenge the dominant discourse.

But each of these voices was very small, with not enough influence to justify a buyout from Lutyens’ Delhi. The UPA classes had all the power and all the privileges; they had their Padma decorated soldiers posted at every checkpoint on the information highway, from media to universities. What could possibly go wrong?

Could a handful of angry voices really hurt a dominant ecosystem? As a “technology demonstrator”, a prominent TV anchor once sued a poor blogger for exposing her shoddy reporting. The helpless blogger had to retreat immediately. The UPA classes were happy. No threat. These people could be shut down at will.

Meanwhile, the potential of the internet was still unfolding. The once solitary voices were all seeking out and finding each other, interacting and multiplying in strength. What used to be a dull buzz had become a clamor.

The bosses observed these developments with some irritation, but they were still not sure if they needed to go for an attack. They had all the power and all the money and it was easy to laugh off the new guys.

It was easy to ridicule the new guys as some kind of curious but ultimately dumb zoo animals, a few steps below rational humanity in the evolutionary ladder.

Then came the fateful nine months between September 2013 and May 2014. The unimaginable unfolded before their very eyes. For the entrenched classes, this was SPARTA! They knew they had to fight. The “Right Wing Troll” was now Lutyens’ Enemy Number One!

From a variety of newly established and well funded online platforms, the war on the online right wing began. The same scroll of liberal talking points was wired across all platforms to be printed everywhere on the internet.

The aim was to make sure that daily opinions of liberals would be the first to be posted on social media. Keyboard journalism entered a golden phase as all liberal hands were summoned to deck.

Except it simply isn’t working. A bunch of amateurs volunteering their free time is beating the professional liberals hands down. It’s unfair to even refer to the online RW as part-timers, they are probably best described as “hobbyists”.

Let me repeat this: professional liberals are working full time fighting some amateurs and hobbyists for a living. And they are still losing. Says something truly pitiable about intellectuals and journalists, no?

For the lutyen’s liberals, it was not just all hands on deck. They had to go lower. Shoddy pamphlets on right wing social media “trolls” were printed by the Dirty Tricks Department. Can you believe that “revelations” contained in these pamphlets were debated on prime-time television when they came out? 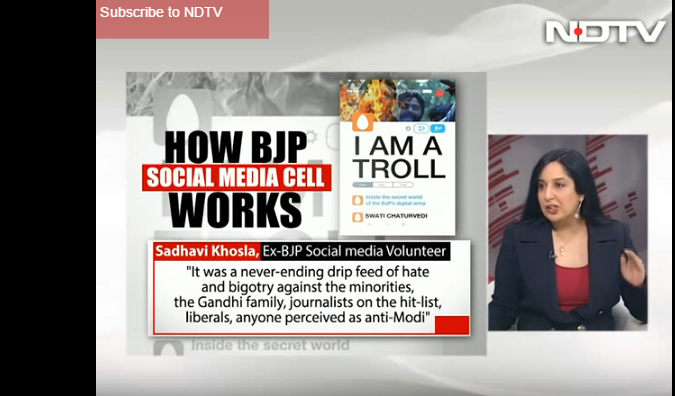 The nadir was reached yesterday when Trinamool’s Derek O’Brien presented what he considered his “best speech”. No really: 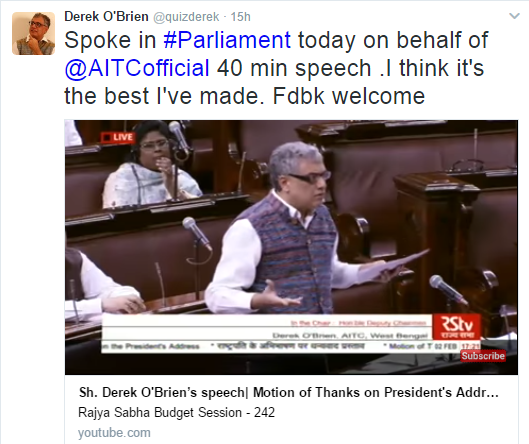 In this Rajya Sabha speech, Derek O’ Brien made 3 specific claims about twitter handles @bhak_sala and @MahaveerM_  (among other accusations of making rape threats and communal threats against unnamed pro-RW twitter handles):

You know, we in India have a tendency to outrage against the “VIP culture”. By “VIP culture”, we generally mean stuff like red beacon cars and security exemptions at the airport and so on and so forth. Granted that these things suck and give us a sense of unfairness.

But what is much worse is the parliamentary privilege that allows politicians like Derek O’ Brien to make any allegation they want without providing evidence. We the people enjoy no such protection. When we ordinary people say anything, we are stepping into a maze of defamation laws, laws against hurting religious sentiments, laws against insulting women, laws against divisive speech and so on.

Any one of these can be invoked conveniently to silence us. As one blogger famously found out, you will get sued. You will be crushed.

Nevertheless, I see Derek’s speech as a victory for the online Right Wing. The professional left is officially terrified of the speech of amateurs. They said “feedback welcome”. Hopefully, they meant it.

Akhilesh Yadav disregarded claims that a Shivling has been unearthed inside the disputed Gyanpavi premises.
News Reports

Ajay Mishra in his report has submitted that the survey was done by him on May 6 and May 7 and the Muslim side had gathered a mob of over 100 people during the survey to hinder their work.