The outrage that was not – legal sharaab vs illegal kabab 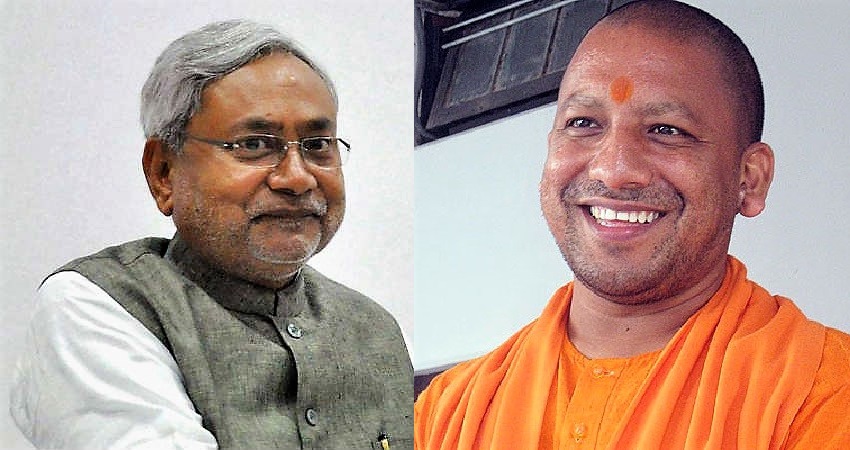 Uttar Pradesh assembly election of 2017 was one of the most fiercely fought polls after the general elections of 2014, where Media almost acted like a participant rather than a medium of reportage. So the circus that we see today was expected when BJP won, and especially after the party chose Yogi Adityanath to lead the state.

During election campaigns, a poll promise repeatedly emphasized by BJP was that of closure of illegal slaughterhouses. Rightfully so, post victory, Chief Minister of Uttar Pradesh got right to the task of shutting down illegal slaughterhouses that functioned in the state, which, per an APEDA report, is the highest producer of meat with 19.1% share in the country.

While I watched the media circus unfold, I couldn’t help but notice the kind of canards being spread by the media regarding a legitimate action initiated by the UP government and juxtapose the outrage with that during an actual ban on alcohol imposed by the Bihar government not too long ago.

The variance in protest was staggering. But what was more horrifying, was the utter lack of interest among the ‘intellectual’ class to dig deeper and perhaps debate on facts.

In this article, I have decided to compare the impact and reasons the two decisions taken by two different political dispensations, in two different states. The action against illegal slaughterhouses that per our intellectual class, spells the doom of Uttar Pradesh, and the ban on alcohol, a largely legal and regulated industry, that was termed a revolutionary move.

Perhaps the two main laws that one needs to understand with respect to slaughterhouses is, a) Prevention of Cruelty to Animals (Slaughter House) Rules, 2001 and b) The Uttar Pradesh Municipal Corporation Act, 1959 (pdf). While for the Alcohol ban in Bihar, the Nitish Kumar government enacted the Bihar Excise (amendment) act, 2016.

The laws governing the two decisions, juxtaposed together, point to the glaring mismatch in critique.

Laws regulating slaughterhouses have been in existence since time immemorial. it deals with aspects such as the manner in which animals are to be slaughtered, the physical facilities mandatory for slaughterhouses, disposal of waste material etc.

Some of the various provisions in the above laws:

The “ban” on illegal slaughterhouses, as being phrased by the media, is for the entities that don’t adhere to regulatory laws that have been enshrined for the safety of the animals, environment and consumers.

The alcohol ban in Bihar, was the result of an amendment being passed to the Bihar Excise Act. The basic tenet that all laws are based on is the assumption of innocence until proven guilty. The Bihar Excise (Amendment) Act, 2016, on the other hand, assumes guilt until proven innocent.

This legal conundrum is proved by the provision that prescribes the arrest of all adult members of the family if alcohol is consumed by one member of the household (holds true even if alcohol is found in the premises). Some of the other provisions are:

Most offences attract a minimum punishment of 5 years and a maximum punishment of life imprisonment. This “Tughlaqi” law breached all the basic tenets of judicial jurisprudence; from assumption of guilt, to collective punishment, to imposing the alien concept of vicarious liability to shifting the burden of proof to the accused to horrifyingly defying the doctrine of proportionality when it comes to punishment.

Legally, while the closure of illegal slaughterhouses focuses on implementation of well thought out laws, the Bihar alcohol ban focused on introducing a highly draconian law to compensate for the lack of implementation.

Rationale behind the two actions:

Slaughterhouses are listed under the “Red category” which means they are among the industries that are considered heavily polluting. in 2015, of the 129 industrial units (deemed very hazardous for the environment) that have not installed anti-pollution devices, 44 units were slaughterhouses (pdf). The impact unregulated slaughterhouses have on the environment are tremendous.

Many slaughterhouses run without Rendering Plants. The generated useless fat, bone and mass is meant to be disposed in the rendering plant. Illegal Slaughterhouses end up dumping it in water bodies thereby contaminating the water bed.

Situation in Meerut was so bad that National Human Rights Commission had to issue notices to the municipal commissioner of Meerut and chairman of the State Pollution Control Board to appear in front of the commission in 2009 for non-compliance of its recommendations on closure of illegal abattoir and about 200 furnaces used for extraction of animal bone fat in the city.

It is said that Meerut will face a severe water crisis by 2030 because of water contamination due to industry effluents and particularly, pollutants generated by slaughterhouses. The hand pumps were drawing unclean and unfit to drink water in 2015 itself.

Another complaint seems to be how some licensed slaughterhouses seem to be getting temporarily shut as well. Just because the slaughterhouse is legal, doesn’t necessarily mean the norms are being followed. There was a slaughterhouse in Ghazipur that was electrocuting animals before slaughter (I would suggest viewer discretion since the video embedded can be disturbing).

In this scenario, the arguments against closure of illegal slaughterhouses sounds shallow and unintelligent.

Without going into religious arguments of the sacredness of Cows, the practical aspects of cow slaughter also need to be discussed.

“Cows provide approx 100 million tonnes of dry dung a year costing Rs 5000 crores which saves 50 million tonnes of firewood. It is calculated that if these 73 million animals were to be replaced, we would need 7.3 million tractors at the cost of 2.5 lakh each which would amount to an investment of 180,000 crores. In addition 2 crore, 37 lakh and 50 thousand tonnes of diesel which would mean another 57,000 crore rupees. This is how much we owe these animals, and this is what we stand to lose by killing them.”

These statistics were given by Mrs. Maneka Gandhi in 2012. I would conclude that the greatest disservice to the environment and to the cows themselves has been them being considered sacred by Hindus. Were they not revered, perhaps the intelligentsia would be more receptive to dangers of indigenous cow breeds being slaughtered.

The reasons cited for the Bihar alcohol ban were flimsy and didn’t hold ground. They justified their draconian law by saying that an alcohol ban would reduce crimes and also provided some wishy washy moral argument for this move. While the results were far from expectations.

Post alcohol ban, cognizable crime – which the police can investigate without a magistrate’s order – rose 13% between April and October 2016, from 14,279 in April to 16,153 in October. The complete analysis of Bihar Police Crime Records can be read here.

Essentially, there were compelling reasons to stop illegal slaughterhouses in Uttar Pradesh while no such pressing reason was apparent to shut down legal alcohol business in Bihar.

Impact of the decisions:

The self-proclaimed intelligentsia and guardians of “liberal” values claim that this crackdown against illegal slaughterhouses is against the Muslims. Now I won’t assume to analyse why these people insist on seeing everything through communal prism, but their argument is as factually incorrect as is myopic.

According to an office-bearer of the All India Meat and Livestock Exporters’ Association, “Except butchers, who are specialised in ‘halal’ (Islamic) slaughter, the rest of the workers in almost all abbattoirs are Hindus.”

So if the the AIMLE officials claim that a vast amount of workforce in slaughterhouses are in fact Hindus, the argument of it being “Anti-Muslim” fails to prove its worth.

Another critique of the crackdown on illegal slaughterhouses is how it would affect the employment in the state. Yes, I do concede employment would take a hit for the ones employed in illegal slaughterhouses. But, citizenry can’t possibly expect the state to not follow the law because it will cause an inconvenience to the ones indulging in illegal activity. The liberal argument unfortunately defies basic principles of common sense.

The staggering hypocrisy is also evident from the fact, that these very people failed to see the job losses when Nitish Kumar banned a largely legal and licensed trade and imposed a draconian law because of which over 44,000 people currently languish in Bihar jails.

The situation of citizens being incarcerated is so appalling, that the Bihar government was contemplating increasing space in their jails to accommodate the recent arrests. The alcohol ban has cost the state of Bihar 5500 crore and has rendered at least 35000 people jobless.

Nitish Kumar had once wooed Carlsberg to set up plants in Bihar convincing them to set up a $25 million plant near Patna. Bihar had almost become a hub for the brewery industry and post the alcohol ban, most companies like Carlsberg, Cobra, Diageo Plc, United Breweries and Molson Coors are mulling exit as their licenses may not be renewed.

Strangely, people talked more about revenue losses in Uttar Pradesh (where revenues were actually denied due to illegal business) while not caring about losses in revenues that was being earned through taxation of a legal business in Bihar.

It is indeed tragic that not only our political dispensation, but even the opinion makers of this country choose to support banning a largely legal industry but oppose action taken against illegal businesses of an industry classified under the red category.

These are the very people who talk of animal rights, the rights of citizens to live in a clean unadulterated environment and lament the rise of lawlessness in the country. Nothing but an inherent bias against a man in saffron explains this inconsistency.