Finally ceding to a longstanding demand from BJP workers, cadres and sympathizers, party president Amit Shah began a concerted initiative against the Communist reign of terror and death in Kerala.

On the elite left, the reaction to the BJP’s efforts has been very interesting. Often known to (pretend to) oppose whataboutism, the left dug deep into decades old history to somehow prove that the RSS/BJP and the Communists are somehow equally to blame for the political violence. 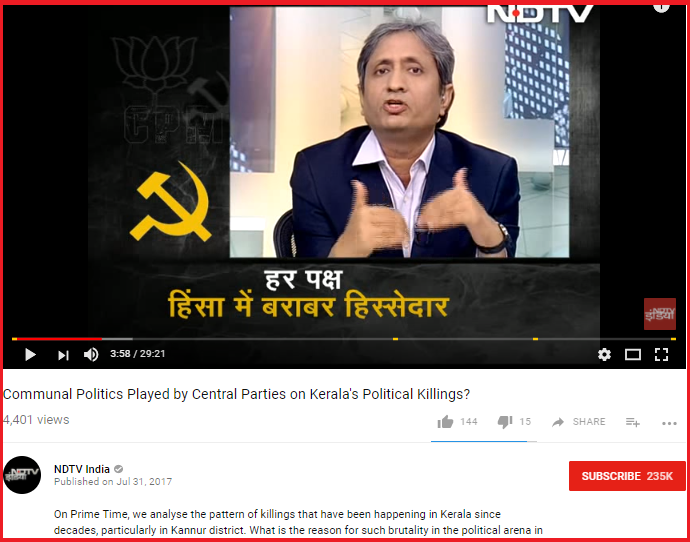 I really recommend people to watch this video, if only to see Ravish Kumar’s desperation as he complains that the “national” media selectively covers only the killing of RSS workers in Kerala. One wonders if the leftist propaganda outlets would have done so much in depth research into decades old history if a Hindu Muslim flare up had occurred, especially in a BJP ruled state.

Look who’s complaining about the use of the “victim card”. It’s our friendly propagandists at Scroll.in

These are the same kind of folks who gathered at the Press Club to protest a couple of tasteless tweets after the murder of Gauri Lankesh.

The comical, hypocritical rage of the left at being hit hard on its dark underbelly of violence in Kerala is something to see.

However, the simple truth is that only the Communists are to blame for the violence in Kerala. Here’s why.

The RSS/BJP is not present in just one or two states, unlike the CPI(M). At the moment, the BJP is ruling as many as 13 states. It is the main opposition in several others, such as Karnataka or Himachal Pradesh. The BJP has come and gone in numerous state capitals for the last three decades.

But have we seen any such decades long cycle of political violence between BJP and its competitors in any of these states? Are Congress and BJP workers killing each other in turns in say Gujarat (where BJP has been sort of ruling forever) or Rajasthan (where BJP and Congress rule alternately)? Do we see any such cycle of murder in Madhya Pradesh (where BJP mostly ruled in the recent past) or in Maharashtra (where BJP was mostly in opposition)?

No, of course not. Because none of these other states I mentioned above have any sizeable Communist presence.  But travel out of Kerala in the south to Bengal in the east and what do we see again?

As many as 28000 political murders in Bengal between 1977 and 1996, admitted by Buddhadeb Bhattacharjee himself on the floor of West Bengal assembly.

The only reasonable conclusion here is that the introduction of Communists into the political sphere of a state leads inevitably to political violence.

The RSS/BJP is (nearly) everywhere in the country. But large scale political murders seem to happen only when the Communists are around.

Who should we blame then for political violence in Kerala? The CPI(M) and only the CPI(M).

Of course, this ties up perfectly with the way Communists have behaved all around the world. The murderous regimes of Stalin, Mao and Pol Pot killed hundreds of lakhs of people. The portraits of some of these mass murderers can be found hanging in CPI(M) offices. 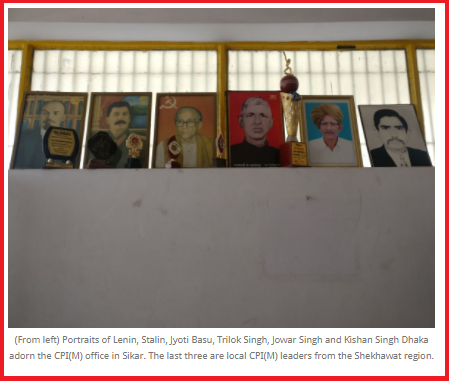 This photo is actually from Scroll itself. See the decorated portrait of their hero Joseph Stalin?

I wonder if NDTV and The Wire and Scroll would ever question the Communists for putting up Stalin photos in their offices. Does it amount to the CPI(M) endorsing the slaughter of 30 lakh innocent people under Stalin?

I hear that Indian liberals are much outraged because some people that the Prime Minister follows on Twitter have used some abusive language. My guess is that the same liberals will make excuses for the CPI(M) putting up in its office a decorated portrait of a man who killed 30 lakh people.

The truth is that Communists today are surprised and outraged about their dark underbelly in Kerala being exposed to national attention. With sympathetic leftists controlling most of the flow of information, the Communists thought their killing fields in Kerala would remain hidden forever. Not any more.

Two The Quint journalists, one accused in MeToo and for another for abetment of suicide, win Ramnath Goenka award

OpIndia Staff - January 21, 2020
The winners of the Ramnath Goenka Awards for excellence in journalism were declared on Monday.
Read more

From breaking Murthis to Ravana Leela: Periyar’s long history of hatred towards Shri Rama and Sita

ED arrests CC Thampi, through whom not just Robert Vadra but even Rahul Gandhi had a connection with arms dealer Sanjay Bhandari: Read details

Saba Naqvi mirrors Jihadis, insinuates that re-settling Kashmiri Pandits in the valley is a part of the ‘Hinduisation’ project

Rajnikanth refuses to apologise after complaint filed against him for comments on Periyar: All you need to know about the controversy

If you believe Google Trends, BJP has an advantage over AAP in Delhi: Here is how

Biggest takeaway from Saif Ali Khan interview on Tanhaji: He doesn’t give a damn about politics, he only cares about his career

Rajasthan: Unable to cope wife’s popularity over social media, man strangulates her and then smashes her face with stone

India registers 16 per cent growth in FDI investments to $49 billion in 2019: UN Report

No matter how many protests happen, CAA will not be rolled back: Amit Shah in Lucknow

From breaking Murthis to Ravana Leela: Periyar’s long history of hatred towards Shri Rama and Sita