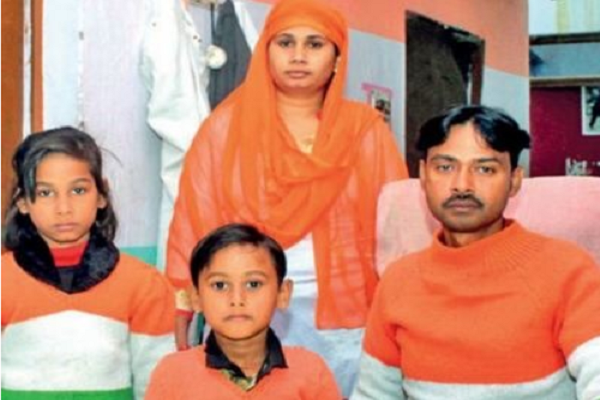 In a news which might dent the so-called “composite ethos” of India, a Muslim man has run into a variety of troubles due to his love for national song “Vande Mataram”.

As per reports [1][2], an Agra resident Gulchaman Sherwani, who resides in the Muslim dominated Azampara area has alleged that, he and his family are facing a boycott, which includes an expulsion of his kids from an Islamic school. They have also come under attack from a section of their community for wearing Tri-colour clothes.

As per Aslam Khan, the person who runs the school, he was forced to remove Sherwani’s daughter for the school due to objection from other parents. As per Khan, this opposition stemmed from the family wearing “Tri-colour clothes” and the father singing the national song.

Sherwani has also faced difficulties in the past which as per him, include an issuance of fatwa against him by Shahi Imam of Delhi Jama Masjid, Maulana Ahmed Bukhari. Bukhari had not stopped at that and even called him a “Kafir” or unbeliever.

Such an opposition to Vande Mataram was also seen in the Meerut Municipal Corporation House after a group of Muslim councillors left the venue where “Vande Mataram” was being sung. The “justified” this decision of theirs by claiming that Sharia law doesn’t allow them to sing it. Their membership was later terminated.

This isn’t the only time certain people of the Muslim community have been tormented for going against the “prescribed norm”.

We had reported how 25 Muslim families in Madhyatilla locality in Shantirbazar sub-division of South Tripura were denied entry in their local mosque because they had joined the BJP. These 25 families which comprised of a total of 200 people had quit the CPM to join the BJP.

It was also seen that a Kerala mosque committee had ordered the boycott of a Muslim family because they had agreed to the marriage of their daughter to a non-Muslim.