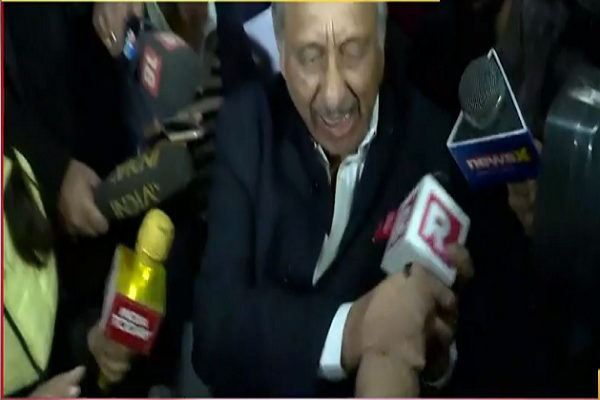 In the last few years, Mani Shankar Aiyar may have become one of the more prominent liabilities of the Congress thanks to his snobbish attitude and outspoken demeanour.

In 2014 he had cost the Congress dearly after making an elitist comment against PM Modi’s humble tea selling background. This was widely considered as an anti-poor statement by the senior Congress leader.

Yesterday, Aiyar decided to top it off by calling PM Modi neech – or lowly. Many as a result considered it a casteist and derogatory statement against the Prime Minister. The Congress in a desperate damage control mode decided to suspend Aiyar, but it wasn’t before the damage was done:

I have nothing to say on a ‘wise’ Congress leader calling me ’Neech’. This is the Congress mindset. They have their language and we have our work. People will answer them through the ballot box. https://t.co/2McoZnaoarpic.twitter.com/icGqAphUzy

Aiyar though wasn’t done and had one controversy left within him before he called it a day.

Soon after his neech comment Aiyar was predictably swarmed by journalists. One such channel among them was Republic TV. As per a clip released by the channel, the Republic TV reporter is heard asking Aiyar whether he would apologise for his statement.

Mani Shankar Aiyar though is seen ignoring the reporter and when the questioning continues, is shockingly seen forcibly yanking the mike off the journalist. He even abused the reporter by yelling “fu*k off” to him.

Sadly there was another darker side to this story. As per a Times Now clip shared by Twitter user @Babu_Bhaiyaa, an India Today journalist is seen shielding and supporting Mani Shankar Aiyar while he misbehaved with the Republic reporter:

unbelievable.. who is this journalist ? she asking another Journalist to leave the room, and shielding #ManiShankarAiyar.. yeah.. these ppl will fight for your freedom of expression.. pic.twitter.com/kjUGvslMr1

Here Aiyar is possibly seen taking a veiled dig against Republic TV by stating that there’s one channel whose questions I am not ready to take. He then outright asked the reporter to leave and when he protested, an India Today journalist shockingly came to Aiyar’s aide by asking the Republic reporter to not peddle his agenda here.

The India Today reporter is then heard saying, let sir talk, we are not going to allow this, inko (Republic TV) bahar bhejiye (Throw them out) and Nahin karne denge humlog (We won’t allow this).

Such an act was unfortunate on many counts. Not only did the India Today journalist not come to her fellow journalist’s aide, she actually decided to side with the aggressor who as per all accounts was the guilty party.

This incident shocked many people, who wondered what goes on in the country in name of “independent journalism”:

unbelievable.. who is this journalist ? she asking another Journalist to leave the room, and shielding #ManiShankarAiyar.. yeah.. these ppl will fight for your freedom of expression.. pic.twitter.com/kjUGvslMr1

oh wow!!!! So much for camaraderie in journalist fraternity! Freedom of Speech Messiahs !!!! https://t.co/8LsU52al3n

And then @sardesairajdeep will give a lecture on Twitter about FoE. Shameless journalist. Touching a new low everyday!

Ha ha ha! Salutations to me! good they got a taste of their own medicine @mediacrooks happy to get trolled …Take all criticism positively ?https://t.co/ZpGy7T4BGc

After such episodes, one might feel that a section of the Indian media isn’t even pretending to stay neutral and is trying everything to somehow curry favour with the Lutyens elite, who might be out of power right now, but enjoying the reciprocal patronage of a section of mainstream media.