OpIndia
Home Opinions How should Hindus react to images of Ram being beaten with slippers?
Opinions

How should Hindus react to images of Ram being beaten with slippers? 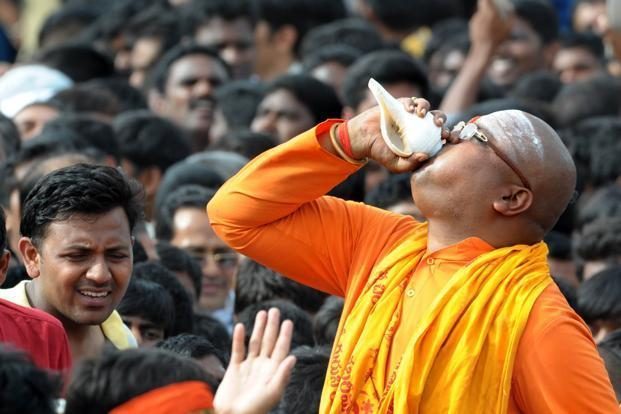 Over the last few days, pictures such as these have been doing the rounds on social media :

Images of Shri Ram being beaten with slippers, allegedly by “Periyarist groups” in Tamil Nadu.

One is tempted to ask if the reaction would have been similar had this been a matter of insult to religious feelings of Muslims or Christians. Or for that matter, an insult to a Communist god such as Lenin. If you live in India, you know the answer to that question.

This Ram Navami, let us ask the question: so what should Hindus do? How should they react?

First of all, let me say that the lack of violent reaction says something fundamentally good about the Hindu community. There were no riots, no Hindus blowing up suicide belts, murdering cartoonists or flying planes into buildings. It is a reminder that the credit for our (relatively) free democratic culture lies almost exclusively with Hindus.

There are communities in this country for which mainstream media has to make excuses after they have managed to murder somebody possibly for saying Vande Mataram or Bharat Mata ki Jai. Whether they lock up people in a railway coach and burn them alive or behead a young lover on the public street in Delhi, the media is left doing the messy cleanup task for them. As much as I resent the media for its double standards, I wouldn’t want the Hindu community to become like that. Violence should *never* be an option. Never ever.

Back to the question: So how should Hindus react?

Let me explain by telling you a fable that I heard as a child and you may have too. There was once a very poisonous snake, who lived under a large tree in the centre of a village. Because the snake was very deadly and bit anyone who came near, people were scared of even setting foot in the area.

One day, a Sadhu Maharaj who was travelling to Varanasi, happened to sit down under the tree for some rest. Immediately the snake came out of its hole and told the sadhu: “You made a mistake by sitting down under my tree. I will bite you now. Get ready to die.”

“But why?” the sadhu asked, “Why do you bite anyone who sits under your tree?”

“Because that is how I defend my home,” the snake answered.

“Look how much misery you have caused to people of this village. You are committing a very grave sin, my son,” the sadhu explained.

The snake listened. “I shall not bite anyone from now onwards,” he promised the holy man. The sadhu went on his way.

Months later, when the Sadhu Maharaj was returning from Varanasi, he stopped again at the same village, sat down under the tree and called to the snake.

“In here,” the snake replied weakly. He was feeble and dying.

“Who did this to you?” the sadhu asked.

“You!” the snake replied, “You told me not to defend myself. Now see how people have beaten and tortured me. You are to blame for my death.”

“I never asked you to stop defending yourself.”

“You did! You told me never to bite anyone.”

“Yes. I told you never to bite anyone because it is a sin. But did I ever tell you not to rise up and spread your hood?”

We Hindus have to learn from this story. Violence is wrong. But that does not mean we are helpless. There are one billion Hindus in this country. If united, we make up a voting bloc that would make any politician weak in his knees.

Remember Gujarat? Those who once said that Muslims have the first right to India’s resources were running from temple to temple showing off their supposed Hinduness. At one point, Congress spokesperson Randeep Surjewala was under so much mental stress that he blurted out that Rahul ji is not just a Hindu, but a “janeudhari Hindu.” Why the Congress Party is implying that being a “janeudhari” is somehow superior to being an average Hindu is something left for them to answer.

But in the Congress Party’s desperate, disoriented reactions in Gujarat you can see the power of Hindus at 50% consolidation. Imagine what the political landscape of this nation would look like at 100% consolidation.

Images of Shri Ram being beaten with slippers? Yes, we Hindus can prevent this from happening. We just need to rise up and spread our hood.