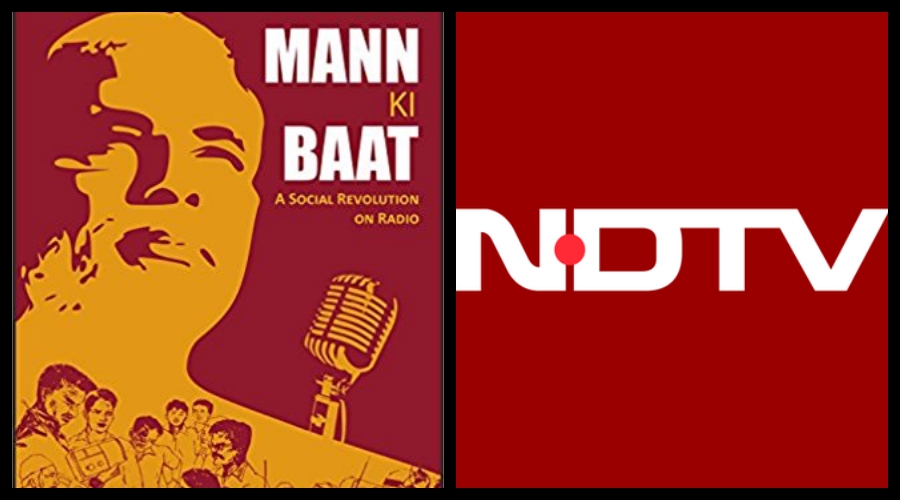 The past few days have been abuzz with heated discussions on Fake News and people from both sides of the spectrum have pitched in their two cents. Former Union Minister and eminent journalist and now a perennially disgruntled Modi baiter, Mr Arun Shourie decided to visit the NDTV studio to share his views and opinions on the discussion around Fake News. While the irony of discussing Fake News with NDTV could not be missed, the discussion is important because of some of the revelations made by Mr Shourie through the course of the interview. Mr Shourie and NDTV’s Sreenivasan Jain insinuated that the “PMO had faked authorship of a book on PMs Mann ki Baat” which was released by the President of India in 2017.

Mr Shourie on record said that the author of the book “Mann ki Baat: A Social Revolution on Radio” was presented as authored by Rajesh Jain, a long-time supporter of BJP and the founder of Nayi Disha. But, he added that “Rajesh Jain had absolutely nothing to do with this book”. He said that Jain is his friend who had confided in him about not being involved with the authorship of the book and had given him permission to disclose the same on national TV. “He told me he had been dragged into the (book release) function, given a speech to read”, Mr Shourie said.

Based on his disclosure, NDTV further added that a PIB release of May 25, 2017, reported the book release function and had mentioned that Rajesh Jain is the author of the book. They believed this note to be indicative of PMO faking the authorship of the book. OpIndia decided to dig deeper into the issue and accessed public records to verify the claims of NDTV and Mr Shourie. We found that a probable small clerical error has been spun into a massive controversy to derail the discussion on Media Ethics and Fake News.

We tried to look into what the media reports about the event said in order to see if any further confusion was created about the authorship of the book. We found an article published in The Hindu on May 24, 2017, which had identified Rajesh Jain as the author of the book. But, the article was updated about 5 hours later and a clarification issued by the paper said that the wrong identification of Rajesh Jain as the author of the book has been corrected in the updated version. The screenshots have been provided here:

This goes on to show that at no stage was there an attempt to present Rajesh Jain as the author of the book and in fact, any such mistake was corrected immediately when spotted.

In fact, the copyright page of the book makes it amply clear that it rests with BlueKraft.

All the above instances show that there has been no concerted attempt to pass on the authorship of the book to Rajesh Jain as Bluekraft Digital Foundation has been and continues to be identified as having compiled the book. So, what remains is the case of PIB press notes which identify Rajesh Jain as the author? The most probable scenario in such a case is that there could be a clerical error which led to this confusion. If that was not the case, at least the books would have the name of Rajesh Jain as the author and the media would not have been directed to correct the mistaken authorship details.

The controversy created by Mr Shourie has been given new life by NDTV and other media houses to derail the discussion on Fake News. But, what it remains is much brouhaha over nothing. A possible clerical error has been used to override other crucial facts available in the public domain to insinuate wrongdoing. While Mr Shourie is on a trip of his own, it would not be unfair to say that this sort of obfuscation is standard NDTV work. But, to answer their question, there is no mystery over who wrote Mann ki Baat book. Just pick up the book and you get your answer.

We got in touch with Mr Rajesh Jain via email and asked him specific questions about the entire fiasco. He has responded with “no comments” to all three of the following questions posed to him :

1. Did you specifically and categorically tell NDTV that you had “nothing to do” with the book on Mann Ki Baat radio program? Is that a direct quote from you or paraphrasing by NDTV?

2. Were you entirely unaware of the planning and production of the book when it was being compiled by the Bluekraft Digital Foundation, a foundation you were associated with?

3. With the Prime Minister’s website updating and clarifying that you are not the author of the book, do you think this matter stands resolved now?