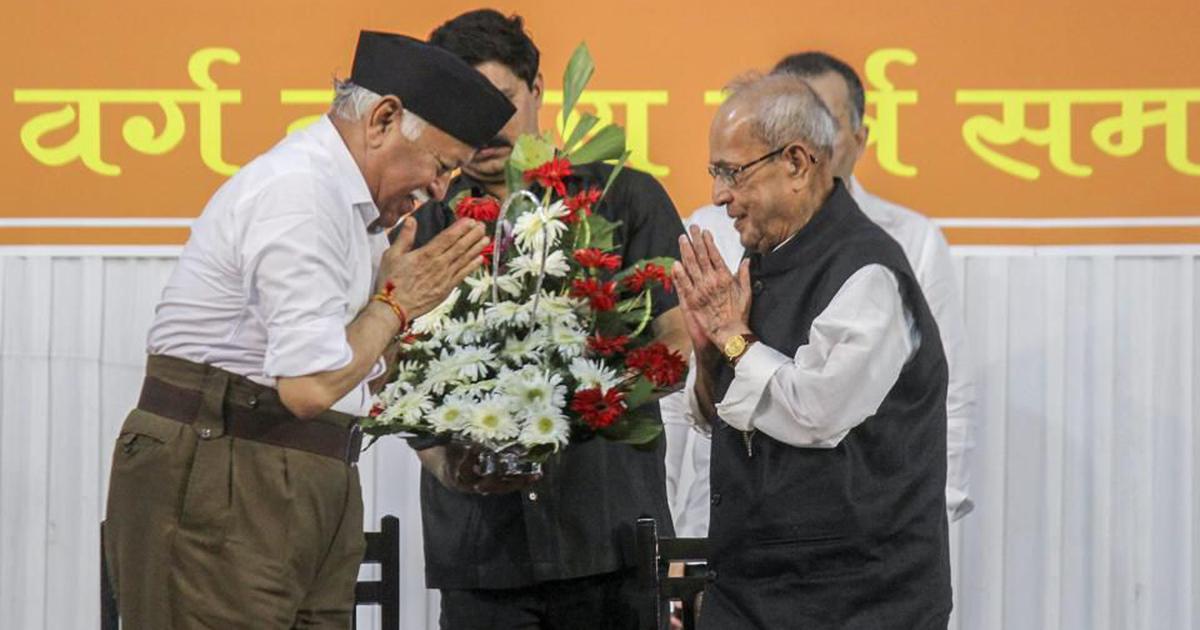 Former President Pranab Mukherjee is set to visit Gurgaon along with the Chief Minister of Haryana to inaugerate projects under the Smartgram Yojana under which he had adopted some villages in 2016, while he was the President of India.

He will visit Harchandpur and Nayagaon, both in Gurgaon, and launch training and innovation warehouses and set up water ATMs, as part of ‘Smartgram’ projects that his foundation is undertaking in adopted villages. He will meet entrepreneurs and sarpanches of both villages. The CM too will be part of the events in both villages.

Economic Times reported that Mukherjee had met RSS workers at his residence a few days ago and briefed them about his foundation’s effort to provide clean drinking water in Haryana villages it has adopted. 15 senior and junior level RSS workers who were invited for the event assured him of all possible help and also presented him a coffee table book on the history and struggles of the RSS.

A member of the RSS while speaking to Economic Times said, “What he is doing is social work and the RSS has a very good presence in Haryana, especially around Gurgaon. We would really like to help him in whichever way possible because for the Sangh, it is the work that matters, not politics”. An associate of the former president while confirming that he met a group of RSS members recently said nothing has been formalized yet about the RSS and Mukherjee working together on any project. “But he has always been a proponent of inclusiveness. And for the work he is doing, he would want to include everyone.”

Earlier in May when the news broke that the former President is set to deliver the valedictory address at the function of Third Year Sangha Shiksha Varga (SSV) of the Rashtriya Swayamsevak Sangh (RSS) at Nagpur and that the RSS has formally extended an invitation to Mukherjee which the former Congress stalwart chose to accept, it drew a lot of controversies with his own party members annoyed at the entire idea. Several Congress leaders had stated their grievance with Mukherjee via letters and phone calls. The former president undeterred had maintained his position of attending the event.

Congress party and assorted liberals had previously displayed their pettiness when the former President had in June, during his visit to the birthplace of Keshav Baliram Hedgewar, hailed him as “a great son of Mother India”. They have continued castigating the Sangh by comparing it to the global Islamist terrorist organisation Muslim Brotherhood which was founded in Egypt. The Former President, however, oblivious to all this maintained that he sees this matter in an ‘apolitical’ sense and believes that he transcended petty political partisanship when he assumed the role of the President of India.

Update: Ex-President Pranab Mukherjee took to Twitter to clarify that there is no collaboration between his think tank and RSS. He clarified that he had adopted some villages under the Smartgram Yojana in Haryana while he was President of India and he will be visiting Haryana on the CM’s invitation, along with the CM of Haryana, to inaugurate the projects started in the last two years.

This article has been updated to reflect the change.