In the afternoon of Monday, the 10th, I had the misfortune of coming upon an article that made an intellectual defence of bestiality. The article, authored by journalist Praveen Swami, makes a cogent case for the decriminalization of bestiality. Before I proceed any further, I would like to take a few words to compliment Mr Swami for displaying his intellectual fortitude and applying the principle of the supremacy of individual rights on an issue as controversial as bestiality. I recommend that readers first read the said article in its entirety before proceeding any further.

As a conservative, I have no compunction in stating that I believe the sexual conduct of individuals must be subject to certain social constraints. However, it would be interesting to witness those who propose that individual rights and choices should be the basis for the framing of laws in a civilized society rebut the arguments that Mr Swami has made in his piece. As far as I am concerned, Mr Swami’s arguments are very difficult, if not impossible, to refute if one buys into the argument that individual rights and choices should rule supreme in matters of sexuality and it is this premise that needs to be deconstructed.

The Supreme Court in its historic judgment decriminalizing homosexuality stated ‘Majoritarian views, popular morality cannot dictate constitutional rights’. “I am what I am, so take me as I am,” said Chief Justice of India Dipak Misra before adding “denial of self-expression is inviting death”.

One wonders why such arguments cannot be made to decriminalize bestiality. For matters of consent and cruelty towards animals, Mr Swami makes the arguments far more eloquently I could. Therefore, it is quite pointless to repeat them here. The only words I would like to add are, whether raping animals, assuming that having sex with animals is cruelty towards them, is worse than slaughtering them for food is a matter of philosophical debate and there cannot be a rational objective answer on the matter. I would further like to clarify that as a matter of principle, I support the decriminalization of homosexuality although I am a bit pessimistic about the consequences the decriminalization of it will have.

Praveen Swami’s article reminds me of Jonathan Haidt’s social intuitionist model of morality. As per the model, we reach moral conclusions not by logic or rationally approaching a moral proposition but that they are reached intuitively. Thus, a rational justification for the moral proposition is made after the individual has reached the moral judgment. He states that a person can change his moral judgment on a particular issue if new intuitions are activated by moral reasoning, which can be private or interpersonal.

The model, which is in stark contrast to the conventional psychological theories of morality that embrace morality, furthers the proposition with strong evidence that reasoning and justifications are made after a moral judgment has already been made. His conclusions come from his extensive studies on “moral dumbfounding” where people have strong moral reactions but fail to offer any rational explanation for the same. Thus, taking into account Haidt’s theory of morality, there appears to be clear evidence that morality is not based on logic and rationalism but on primal factors that shape human behaviour. 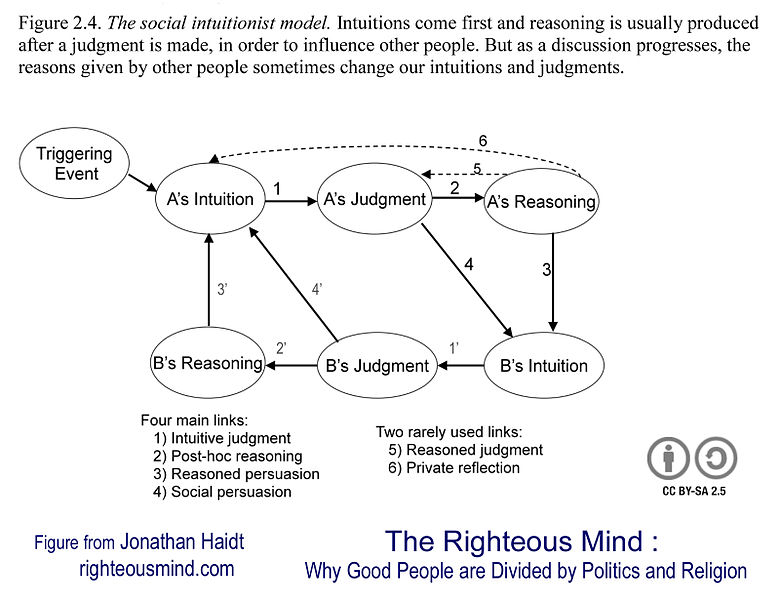 Jonathan Haidt, in his book, “The Righteous Mind”, further elaborates on the issue, a book that I highly recommend to our readers. Thus, it appears clear that morality is inherently ‘irrational’ and not based on logic, or at least based on a set of logic and assumptions that are not universal in nature. All of us have observed at least once during the course of a heated argument on contentious issues how the other person is completely unable to comprehend our rationale. It takes us a long time to discover, and often we never do, that it is because the other person’s arguments are based on a completely different premise than ours. Thus, it is completely alright for those who claim individual choice regarding matters of sexuality should transcend every other concern that they cannot bring themselves to support bestiality. But for that, they must embrace the notion that morality is inherently irrational and adjust their worldview accordingly.

Thus, as a conservative, Praveen Swami’s arguments neither trouble nor shock me because it is not too difficult to see where our laws regarding sexuality would be headed should we base our entire legal system on the basis of individual choice and rights. In addition to bestiality, there is also no logical reason to criminalize necrophilia should we accept the aforementioned premise of the supremacy of individual choices and rights. Indeed, no one is harmed when one has sex with a corpse, it’s a person’s individual choice and consent does not come into the picture as the object of sexual gratification in question is inanimate during the time of the intercourse. The youth branch of the Swedish Liberal People’s Party did argue that incest and necrophilia should be legalized. It is an interesting point to note here that studies on people’s reaction to incest played a major part in shaping Jonathan Haidt’s model of morality. The participants often could not give a good logical reason why incest was wrong even when all negative consequences of it were ruled out in a scenario they had to give their judgment on and often simply said: “It’s just wrong”.

Hence, it is important that we accept the fact that morality is inherently irrational before attempting to change social mores that could cause social turmoil. We need to be mindful of the fact that our moral reasoning makes perfect sense to us alone and what we perceive as ‘common sense’ may be the consequence of our inherent biases. Therefore, we must be honest with ourselves regarding our moral positions and make an attempt to estimate how society would change in the long run should people by and large accept our basic premise, the foundation on which our moral reasoning is based on.

A significant section of the population, mainly among the intellectual elite, has bought into the premise that laws regarding sexuality must be based on individual choices and rights alone. Mr Swami is one of the few people who displayed the intellectual rigour necessary to apply the premise to an issue as contentious as bestiality. I can dismiss his arguments entirely because I do not endorse his position that sexuality must not be subject to social regulations. My reasons for my stated position is that I believe traditional family values and traditional gender roles are essential for maintaining a healthy cohesive society. Destruction of traditional values spells the doom of a nation as can be evidenced by the turmoil that the European Union finds itself embroiled in. The system may not be perfect, nothing ever really is and there is inherent injustice in the system, but it makes it easier for people to lead meaningful satisfying lives and conduct themselves as a productive member of society. On the contrary, the position as endorsed by Mr Swami leads people to advocate for the decriminalization of bestiality and incest and necrophilia. These are not allegations or caricatures that I have conjured from my own head but has been demonstrated by those who take the premise of the supremacy of individual choice regarding sexuality to its logical conclusion.

The only bone of contention I have with Mr Swami is that he uses the ancient history of India and Hinduism to argue for the legalization of bestiality. Ancient scriptures and ancient art were composed in a certain era with a certain outlook on morality. It seems ridiculous to me that certain people would deem Hinduism to be the most patriarchal and most oppressive of all religions and then others of the same political orientation would claim that bestiality was viewed ancient Hindus “as just one more of a wide array of sexual practices.” It is disingenuous to twist our scriptures and history to suit one’s political narrative. And more importantly, it’s not the ancient art, that depicts bestiality, which governed people’s lives. There were laws like they are now, and people had to adhere to them and those laws, I would assume and with good reason, were not an ode to individual choice regarding sexuality. But the crux of the matter is, Mr Swami is not an expert on Temple art or a member of the sampradaya of the Temple he speaks of, therefore, he would be well advised to not make such baseless assertions.

Praveen Swami writes in his article, “The simple truth is: like so many behaviours most of us find repulsive, bestiality is an individual choice. How far societies are willing to concede the right to act on that choice is a good measure of the integrity of their democratic convictions.” I wholeheartedly concur. Therefore, I believe it is time to reject the liberal doctrine on sexuality.