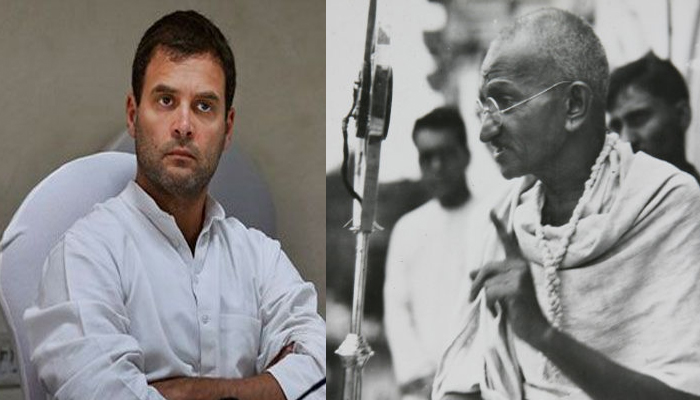 The surname Gandhi has been an integral feature of Indian politics ever since a certain Mohandas Karamchand Gandhi entered the movement for an independent India. Soon enough, he was honoured with the title of ‘Mahatma’ and his birthday on the 2nd of October is one of the three national holidays of India.

Considering Gandhi’s stature in Indian politics, it was only to be expected that Indians politicians would try and latch on to him for their own electoral prospects. And it is for certain that the Gandhi dynasty that has flourished in India for decades has as much in common with Mohandas Karamchand Gandhi as the Congress party in the current year has with the Congress party of yore.

The Nehru-Gandhi dynasty has transformed M.K.Gandhi into a political tool to beat the Rashtriya Swayamsevak Sangh (RSS) with. They themselves care very little about the principles that Gandhi envisioned and worked towards in his life. Gandhi’s dedication towards cow protection is well documented and well known. And yet, during the 1966 anti-cow slaughter agitation, the police fires upon the protesters and murdered quite a few of them, all under the then Prime Minister Indira Gandhi’s watch.

More recently, Youth Congress leaders in Kerala butchered a cow mercilessly in broad daylight in Kerala’s Kannur and cooked it and served it. And if those leaders are to be believed, they did so with the approval of the state president of Youth Congress itself. In another instance, a Muslim cleric in Karnataka boasted that cows will be slaughtered in the state during Bakr-Eid in the presence of a Congress minister who did not raise any objection despite the fact that there’s a ban on cow slaughter in the state. Of course, after public sentiment was outraged following the Congress party’s irreverence towards cows, the party now promises Gaushalas in Madhya Pradesh ahead of Assembly Elections in the state. The Nehru-Gandhi dynasty has turned Gandhi’s principles into a cheap political gimmick.

The greatest legacy of M.K. Gandhi is his commitment to non-violence even when it was horribly misguided. One could argue that his opinions were misguided and possibly even deluded, however, his firm commitment towards the principles of non-violence is very difficult to refute. The Nehru-Gandhi dynasty, on the other hand, is completely detached from Gandhi’s nonviolence. They thrive on pitting one community against another, one caste against the other, fomenting trouble where there’s none and would stop at nothing to retain their grip on power. The Congress party has no compunction in supporting divisive figures like Jignesh Mevani who was caught on camera instigating people before violence erupted at Bhima Koregaon. And who could ever forget the Sikh genocide committed by the Congress party in 1984?

M.K. Gandhi worked significantly towards the upliftment of the lower castes. The Nehru-Gandhi dynasty, on the other hand, has exploited fault lines within Hindu society and kept them divided so that they could rule over them. They have substituted development of the lower castes with sowing resentment between different castes. Their senior leader, Mani Shankar Aiyer, uses casteist slurs against Prime Minister Modi who himself belongs to the OBC category with very little consequence.

In his heart, M.K. Gandhi was a devout Hindu. The Nehru-Gandhi dynasty, on the other hand, has done everything possible and more to undermine Hinduism. They have denied the existence of Shri Rama in the Court and their senior leader, Kapil Sibal, struggled hard to delay the resolution of the Ayodhya dispute. Congress President Rahul Gandhi reportedly told the US Ambassador that Hindu extremists were a greater threat to India than the Lashkar-e-Taiba. The Congress’ extensive efforts to establish the myth of saffron terror is quite well known. And if certain media reports are to be believed, Pakistani suspects were let off the hook without proper investigation during the same time it was busy furthering the narrative of Hindu terror. And of course, there was the Communal Violence bill which sought to mandate that only minorities could claim to be victims of communal violence.