Soft Hindutva in public, minority appeasement in private and creating caste divide in secret seems to be the Congress mantra 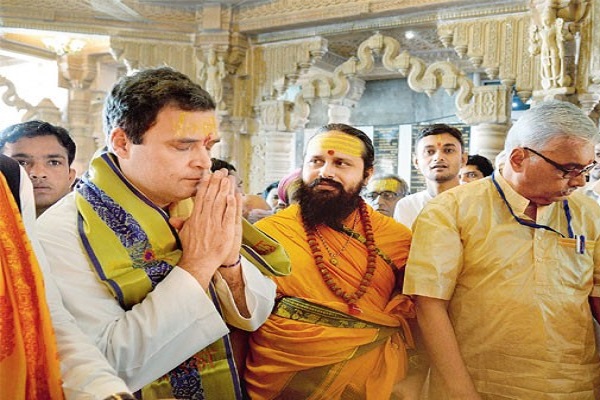 The crucial southern state of Karnataka is up for polls this year and recently anointed Congress President Rahul Gandhi is gearing up to go temple hopping for his party’s election campaign. Symbolically, in the next week, he would visit two religious centres of the Lingayat community and one Dargah during his trip to the state.

Whether intentional on not on his and his party’s side, this might start getting analysed as “soft Hindutva” triumphing its longstanding “secular India” narrative, which time and again has been perceived as an “anti-Hindu” or “minority appeasing” perception by various political observers.

During the buildup to the Gujarat elections, the Congress party had surprised many by openly declaring its intention to woo Hindus, with its “star campaigner” Rahul Gandhi going on a literal “temple run” during the state’s campaign. The party further ‘saffronised’ Rahul as a Janeu-dhari Shiv Bhakt’ when rumours spread about his name being registered in the non-Hindu register of the Somnath temple.

Back then it might have been perceived as a desperate measure of the party to curry favour among Hindu voters to maintain political relevance, in an era where its fortunes were rapidly dwindling. Making some feel that it would be something which the party might cool off in the future.

But no, come January, Rahul Gandhi began his Uttar Pradesh tour by taking darshan at a Hanuman Temple on route to Amethi. Now intentions have again being made clear in form of the temple visits which have been lined up in Karnataka.

As is said, “Once is chance, twice is coincidence and thrice is a pattern”. Are we seeing a dawn of a new Congress party, as a so-called pro-Hindu party which till now used to be BJP’s exclusivity?

Before conclusions could be passed, came a spanner in the works.

PM Modi was speaking in Rajya Sabha on Wednesday. During his speech, Congress MP Renuka Chowdhary found something very funny and laughed in a manner which many felt was deriding and condescending. Modi didn’t take it lying down and quipped that, “after so many years since Ramayana are we able to hear such a laugh”.

This was almost universally considered as comparing Ms Chowdhary’s laughter with that of Ravana’s sister Shurpanakha.

In the resultant chaos, reports emerged which quoted senior Congress leader Anand Sharma as stating that, “PM Modi believes in “fiction” and “mythology”, not science hence he (Modi) must have watched Ramayana several times”.

When you are trying to woo Hindus, it is generally accepted you can avoid indirectly dismissing one of the most Revered Hindu scriptures as “fiction”. What might make it more stinging for people is that about a decade ago the Congress-led UPA government had submitted before the supreme court that “there was no historical proof of Lord Ram”.

Continuing in this context, in December, the Congress party had decided to maintain ambiguity over its stance on Ram Mandir by refraining from commenting on the matter. The explanation given then, was that it would be unfair to comment on a subjudice matter. Its senior leader Kapil Sibal though was making other noises, with reports claiming that he was trying to delay the verdict in the matter, by openly trying to push the issue beyond the 2019 elections.

So what is it with the Congress party, when it comes to its pro-Hindu push?

Is the party’s hypocrisy a relapses into an old habit, like a rehabilitating addict not being able to avoid past habits, while desperately wanting to start a new life? Or is it that, the whole soft Hindutva push is merely a facade to hide the party’s true identity and principles.

Some might question whether this ‘conflict’ within the party was a mere representation of some tussle between the conflicting ideologies of the old and the new guard, symbolised by Rahul Gandhi succeeding his mother Sonia.

But is the new guard at its core any different from the old guard? As after-all, the new age leader Rahul Gandhi himself had told the US ambassador that Hindu extremists were a bigger threat to India in context of the Lashlar-e-taiba.

This statement was made in the day and age when the ecosystem was desperately peddling the ‘Hindu Terror’ narrative by maliciously arresting ‘Hindu terrorists’, in cases like the Malegaon and Samjhauta Express blasts. This has now been started to be called into question by media reports, which have alleged that the UPA government had let off Pakistani suspects in the Samjhauta blast case to try and further the false “saffron terror” narrative.

Some of the arrested in the “Hindu terror” cases like Col. Purohit and Sadhvi Pragya only managed to procure bail in 2017, with the latter’s lawyer claiming that she should have been granted bail within five minutes.

All this is apart from the noise made by the state level leadership of the Congress, which includes Karnataka CM Siddaramaiah asking for the opinion of district heads regarding withdrawal of cases lodged against minorities. After public furore, he decided to take a U-turn. Just to mention, he also has possibly signalled his intention to play by the “old rules”, when he called BJP and Congress Hindutva terrorists.

So considering this, is Congress planning on playing an “overtly pro-Hindu” and “covertly same old same old” game, to satisfy all its planks? What also emerges is that Congress is using the “soft Hindutva publicly, minority appeasement privately, and caste divide covertly” tactic to try and keep all factions happy. We have seen their divisive tactics since time immemorial. Most recently, with their unholy support to people like Jignesh Mevai and Hardik Patel, their tacit silence during Koregaon violence, their direct involvement in the Padmaavat row, and beyond. While Congress tries to publicly appease Hindus, it has time and again jammed a dagger in the Hindu back by dividing them on the basis of caste.

Yesterday it was Gujarat, today its Karnataka and tomorrow it may be the 2019 Lok Sabha elections where the party decides to openly play the soft Hindutva card, but what it can’t possibly deny is the skeletons from its past which promptly call into question the party’s integrity regarding its “redeveloped image”.

Such a paradoxical situation which the party now finds itself into might result of its decade-long lopsided public positions which prominently began since the Shah-Bano case.

It might be some time before some form of consistency (if at all), starts appearing in the party’s stances, but until that happens, the perception could continue that the party might never be able to whitewash its anti-Hindu genes.