The goal of propaganda is to make the population pliable so that the establishment's decision does not face too much of a resistance. Tharoor's tweet, too, ought to be seen in that light. 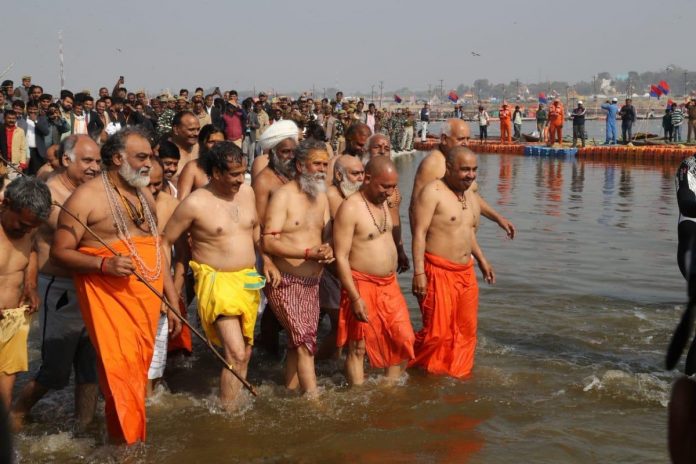 In an earlier article, I had elaborated on how propaganda works and described how Business Standard’s article associating the Kumbh with unemployment without any basis, in fact, was a classic bit of propaganda.

Now, it appears, senior Congress leader Shashi Tharoor has decided to participate in the propaganda against Kumbh as well. In a tweet yesterday, Tharoor said, “The Ganga has to keep clean and sins have to be washed off in it as well. Everyone is naked in this confluence. Jai Ganga Maiya ki!”

The subtle insinuation that Ganga cannot be kept clean with millions of people taking dips in it is hardly lost on anyone. The elitist indignation at Sadhus and Sanyasis in saffron garb in the picture that he shared, which featured Chief Minister of Uttar Pradesh Yogi Adityanath, is palpable.

People on social media were not impressed with the Congress leader’s tweet either.

You are just a lump of excrement, aren’t you… https://t.co/oSesFdIIkr

So much on the name of Hindu unity. One of the main Peethadhipatis of Hinduism @myogiadityanath is insulted as a sinner, that too by someone who claims to have written a book ‘Why I am a Hindu’ and we Hindus, when not cheerleading, are not at all bothered.https://t.co/NPqN0jzeq5

A nation so habituated of seeing netas in muslim skull cap must find it a welcome change that the cm of UP and his cabinet ministers talking astha ki dubki at sangam, Ab bolo ganga maiya ki jai https://t.co/pM5WRbdDfD

Denigrates & Mocks River Ganga & Hindu beliefs with regard to #Kumbh AND then @ShashiTharoor CLAIMS to be a “Hindu” *SLOW CLAPS* https://t.co/Yl1eN1gPkP

As I have said earlier, Propaganda succeeds by unleashing a barrage of negative/positive reportage of any particular object, occasion or phenomenon. Unless the people are made aware of the insidious designs, they will buy into the narrative that the propagandists are selling.

The Kumbh Mela is one of the most important festivals for Hindus. It unites us transcending the barriers of caste, class, creed, region and language under the banner of Dharma. Therefore, the Kumbh is anathema to those wary of Hindu consolidation.

The Congress party is aware that it lost the 2014 General elections so terribly due to massive Hindu consolidation in favour of Prime Minister Narendra Modi. Therefore, its malice towards the Kumbh is only to be expected.

The Congress party has displayed time and again that despite their outward show of deference to Hindu faith, they don’t truly respect any of our traditions and beliefs. Congress President Rahul Gandhi’s Temple Run was only a calculated move to derive political benefits and not a genuine sense of piety. After all, Congress is the same party that questioned the existence of Shri Rama and one of its senior leaders also attempted to delay the proceedings of the Ram Janmabhoomi case in the Supreme Court.

The recent barrage of negative propaganda against Kumbh ought to make us all wary. The restrictions on firecrackers during Diwali succeeded only because a great many Hindus had bought into the propaganda against the festival and did not resist it enough. The goal of propaganda is to make the population pliable so that the establishment’s decision does not face too much of a resistance. And we are all well aware about the anti-Hindu nature of the establishment. Tharoor’s tweet, too, ought to be seen in that light.