The Congress party appears to be rattled by OpIndia's report which exposed the dubious land deals that link Rahul Gandhi to arms dealer Sanjay Bhandari.

Union Minister Smriti Irani, a probable candidate from Amethi for the Bharatiya Janata Party against Rahul Gandhi, yesterday conducted a press conference where she targeted the Nehru-Gandhi Parivar for their dubious land deals citing the OpIndia report on the matter. Thus, it was only to be expected that she would be the target of hitjobs with General Elections approach.

Randeep Singh Surjewala, spokesperson of the Congress party, on Thursday, alleged that Smriti Irani was ‘exposed’ for “massive fraud”. He then proceeded to ask Narendra Modi whether he will sack her over the matter.

CAG implicates for making payment of ₹5.93 Cr from MPLAD funds without tender including fraudulent payment of ₹84.53 Lacs

Will PM Modi show the courage of conviction to #SackSmritiIrani ?

As it turns out, Smriti Irani had nothing to do with the alleged misappropriation of funds. As a Member of Parliament who has adopted Maghrol village in Anand district under the Sansad Adarsh Gram Yojana (SAGY), she can only recommend work to be carried out in her adopted village. The details and the plan to be implemented to complete the work is supposed to be checked by the Planning Officer. If it does not fall under the guidelines of MPLAD funds, then the amount should not be sanctioned by the Officer.

The scam first came to light in 2017 when the then District Collector Dhaval Patel had written a letter mentioning the irregularities. He had said that the matter had come to light during an audit by the CAG. Even in the letter, he had not mentioned that the MP was to be blamed for anything.

In the letter, as reported by DNA on the 20th of July, 2017, Patel wrote that Shri Sharda Majur Kamdar Mandli, a cooperative society of construction labourers, was allotted the work to construct public utilities in different villages of Anand district. The project was originally given to Gujarat Gram Vikas Agency Ltd, Ahmedabad, a rural development department undertaking and though it was declared defunct through government regulation, the then District Planning Officer (DPO) had awarded it work and made payments as well. After that, the DPO issued an order to transfer the work to Shri Sharda Majur Kamdar Mandli.

Furthermore, the Mandli claimed over Rs. 45 lakhs for the construction of a Panchayat Building which goes against the rules of MPLAD but the amount for it was sanctioned by the DPO. It was further said in the letter that numerous other work had been allotted to the Mandli and funds had also been disbursed but not a single brick had been laid in any of these places.

Later in 2018, in a statement to The Print, Dhaval Patel, the District Collector whose letter the Congress party is using to attack Smriti Irani, himself said that his letter had nothing to do with the BJP MP. He expressly stated that the inquiry and allegations were against “officials and contractors but not Irani”.

The Congress also alleges, “On instructions of PA to Union Minister, Smriti Irani, the works were awarded to Sharda Majdoor Kamdar Sahkari Mandli, Kheda.” This appears to be a blatant lie as Smriti Irani herself cannot award any work to any agency. That is the job of the DPO.

Moreover, Smriti Irani had herself written a letter to the District Collector, Dhaval Patel, on the 12th of July, 2017, inquiring about the progress made on the work recommended by her. 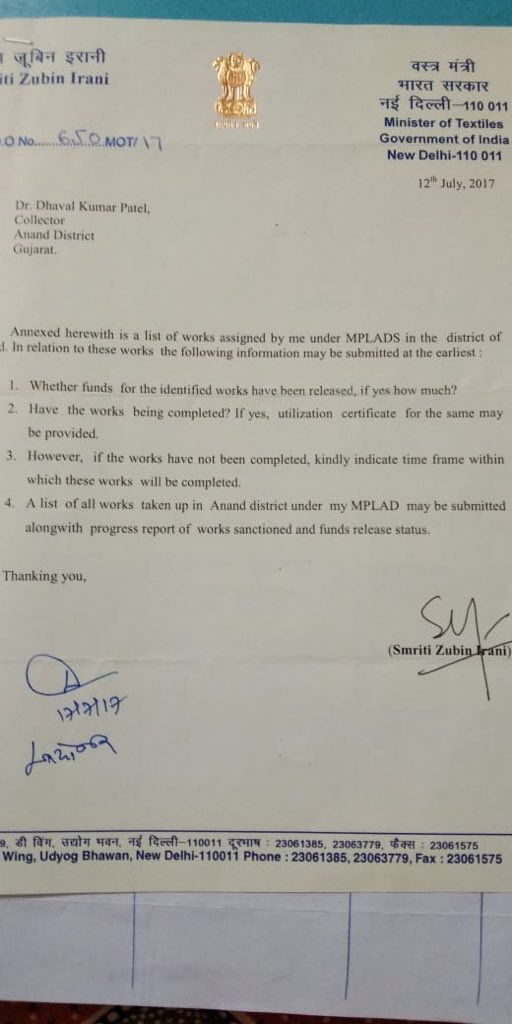 Under such circumstances, when the then District Collector has himself made it clear that the letter he had penned pointed towards irregularities committed by officials and administrators and had nothing to do with Smriti Irani, it appears a rather desperate on Congress’ part to deflect attention from its President’s links to arms dealer Sanjay Bhandari.

As it so happens, even Rahul Gandhi himself has seen his MPLAD funds being misused by corrupt officials. It was reported that two roads were constructed without even issuing tenders and for some roads which had already been constructed, new tenders were invited. Thus, it comes across as a malicious attempt by the Congress party to tarnish the reputation of Rahul Gandhi’s probable adversary in the Lok Sabha elections.

The Congress party appears to be rattled by OpIndia’s report which exposed the dubious land deals that link Rahul Gandhi to arms dealer Sanjay Bhandari. The report was cited by BJP leaders to claim that the links between the two are the reason behind Rahul Gandhi’s campaign against the Rafale deal as Bhandari was a middleman for the Rafale jet’s competitor, Eurofighter.

Rabin Deb, one of the tallest leaders in West Bengal of the CPI (M) talks to OpIndia ahead of the 2021 elections, TMC and BJP
News Reports

Two days before Mansukh Hiren had gone missing, he had sent a letter to Maharashtra CM, HM, and the police alleging mental harassment

Watch: ‘Farmers’ bully and pounce on a young girl as she confronts Rakesh Tikait on Republic Day riots

When the girl questioned Rakesh Tikait over the Republic Day riots, farmer leaders on the stage snatched away the microphone from her

The Congress leader said that if 'communal BJP' has to be stopped from winning in West Bengal, then Congress is the only hope

Matthias Boe, boyfriend of actress Taapsee Pannu, had appealed to Kiren Rijiju to 'do something' to help the actress.
Read more
Opinions

The Saamana editorial asked why only Taapsee Pannu and Anurag Kashyap were targeted and not other Bollywood celebrities.
Read more
Crime

Her husband used to talk vulgar to girlfriend in front of her: Here is what the lawyer of Ayesha, who jumped into Sabarmati river,...

Ayesha, who committed suicide by jumping into the Sabarmati River in Gujarat on March 1, had a disquiet marital life
Read more
- Advertisement -

Almost 100% of China’s public spaces under watch: Here is how China turned neighbours into agents of the Chinese Communist Party

Javed Akhtar confirms he will make a movie based on the life of Rakhi Sawant: Report

As Myanmar police officers flee to India to avoid shooting at civilians, Myanmar authorities request India to return them

India smash England by an innings in 4th test, win series 3-1 to qualify for the World Test Championship final

Delhi: Landowners move High Court after AAP Govt refuses to accept land they want to donate to build a school