Big Tech is watching you: Dear TrueIndology, you never existed

History has a way of repeating itself. Once the old privilege class had been humbled, an all-new privilege class rose up. Big Tech realized they were now the gatekeepers and could do whatever they wanted.

In an ideal world, in an ideal democracy, every voice would be heard equally. Of course, that has never quite been true in practice. Do you think you have the best ideas and want to lead the nation? Good luck forming your own party, getting enough people to hear your message, winning 272 seats in the Lok Sabha and becoming Prime Minister.

In practice, therefore, only a few voices are ever heard. Because even managing to get a handful of people to listen to you is a big deal. Anybody who has ever started a business will tell you how hard it gets the public to even know about your product.

Generally speaking, the media is your gateway to reaching people. As a thumb rule, the gatekeepers will only let you in if you are well known enough to get people to listen. Yes, it’s a vicious circle. Which is why so few make it through.

But there is a second factor. It did not take long for the gatekeepers in the media to figure out that they had tremendous power and could choose to let through only those voices that they liked. In this way, the media could indirectly control the whole nation.

Which is why the social media revolution was such a huge deal. Suddenly, every citizen had a mouthpiece and the old gatekeepers were irrelevant. Worse, the gatekeepers realized they were being watched by the keen eyes of social media. The entry barrier into the marketplace of ideas had been lowered. On this more level playing field, the old privilege was proving useless.

Of course, the tech companies who invented this new space were thrilled. A new frontier had been created. People could make themselves heard like never before.

It was too good to last.

History has a way of repeating itself. Once the old privilege class had been humbled, an all-new privilege class rose up. Big Tech realized they were now the gatekeepers and could do whatever they wanted.

Once the internet decisively won the war with newspapers and old style TV news, a curious thing happened. The old privilege class decided to end its adversarial relationship with social media and big tech and started lobbying with them instead. Like princely states who recognized the paramountcy of the British Raj.

The following picture is completely unrelated to everything else in this article. I am just randomly putting it here.

Most people who are active on social media will know about the recent plight of TrueIndology, an anonymous Twitter handle dedicated to exposing left-wing distortions of Indian history.

Given its huge following, True Indology had become too much of a threat to gatekeepers in the social sciences. And the old privilege class, now embedded as henchmen of the new privileged class, wanted her/him out. And of course, they got their way.

The excuse was essentially the same as that which gatekeepers have used to justify their power throughout the ages. In the middle ages, the Church would protect the ‘immortal souls’ of people from being captured by the Devil. In the 1800s and 1900s, there was the “white man’s burden” to raise the “lesser races” to civilization. The British claimed to hold India “in trust”, supposedly protecting us from tearing each other apart owing to our many differences. Now Big Tech is here to protect us from “abuse”. They don’t want anything for themselves, they are just happy to make sure that supposed “weaker sections” are not crushed by those with more social privilege. You know, exactly like the British.

Those who followed True Indology and even those who despised him will be hard pressed to give a single example of the handle putting out “abuse”. Even so, there was bound to be something in Twitter terms of service (which nobody reads) that could be used to turf her/him out.

What is interesting, however, is what’s okay on Twitter. 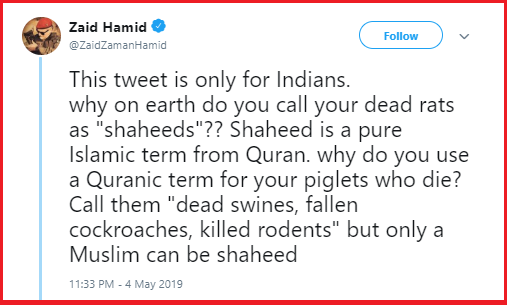 Some folks who reported this tweet claim to have received replies from Twitter stating that referring to Indians as piglets, swine, cockroaches and rodents is not against Twitter rules.

There is a common counterpoint made in such situations that can be easily dealt with. As a private corporation, Twitter is entitled to set its terms of service and indeed its whims. Such a view misses the point that Big Tech functions as a bank for personal data and profits from it, not very different from a bank where you deposit your savings. Would people react similarly if banks functioned in a completely unregulated manner? It is just that the general public is yet to realize that personal data is worth big money. Social media isn’t “free”.

Censorship has existed in every age. The powerful have always tried to impose their worldview on the powerless. But with the rise of Big Tech, something completely new is unfolding in the field of censorship.

In the old days, the oppressor would create a spectacle of punishing their victim. While the victim suffered terribly, ironically, the oppressor would also pay a price, perhaps without realizing it. The spectacle of censorship would create sympathy, keep influencing public opinion until it reached a tipping point. This is why the censors of old never quite managed to kill ideas. Censorship never paid off in the long run. For anybody.

Enter Big Tech. An idea can spread around the world in less than a second. It follows that an idea can also be suppressed almost as soon as it is created. And without anyone even realizing it. As technology takes over all the channels of communication, for the first time in history, somebody has the power to kill ideas. Humanity has not dealt with any such thing before.

Think about how perverse a shadowban is. You create an idea and you think it’s out there. Except it’s not. It’s disappeared. Chilling. In times of oppression, dissenters would invent creative ways to get their message out. But what if the messages simply disappeared into nowhere? An algorithm wipes it out the moment it pops into your head. No visible evidence is left that the idea even existed.

In Nineteen Eighty-Four, Orwell calls it “reality control”. And those who cease to exist are called “unpersons”.

Because Big Tech is watching you.

Bangladesh: Hindu victims of Islamist arson attack in Rangpur say that the horror reminded them of 1971 genocide by the Pakistani army

A day after radical Islamists burnt down 20 Hindu homes in Pirganj Upazila in Rangpur Division of Bangladesh, victims recall horrors of the 1971 Operation Searchlight
News Reports

‘Hand over Kashmir to Biharis, we will fix it in 15 days’: Former Bihar CM Jitan Ram Manjhi tells PM Modi and HM Shah

Jitan Ram Manjhi posted a tweet saying PM Modi and HM Amit Shah should hand over Jammu and Kashmir to Biharis, who he claimed will turn things around in just 15 days.

The “Red Flag” Trend on Twitter reaches India, read what it is all about

Even Asaduddin Owaisi is refusing to defend SRK’s son Aryan Khan: Here is what he said about the arrested celeb

Clothing brand FabIndia gets slammed for branding Diwali collection ‘Jashn-e-Riwaaz’: All you need to know

‘They wanted only virgin girls who had not kissed ever’: ‘Pardes’ star Mahima Chaudhry reveals sexist nature of Bollywood during her prime

Scroll, The Swaddle columnist justifies attack on ISKCON temple and Hindu devotees in Bangladesh by Islamists

Akshay Kumar thanks Major for pointing out wrong depiction of Khukri in ‘Gorkha’ poster, invites suggestions for accurate portrayal

Bangladesh: Hindu victims of Islamist arson attack in Rangpur say that the horror reminded them of 1971 genocide by the Pakistani army

Meghalaya Governor Satya Pal Malik says he has quarreled with PM Modi, Amit Shah to get them to agree to farmer demands

‘Hand over Kashmir to Biharis, we will fix it in 15 days’: Former Bihar CM Jitan Ram Manjhi tells PM Modi and HM Shah

The “Red Flag” Trend on Twitter reaches India, read what it is all about

Even Asaduddin Owaisi is refusing to defend SRK’s son Aryan Khan: Here is what he said about the arrested celeb