It can now be safely concluded that the BHU story should be a lesson in how not to cover news and why we should not jump to conclusions based on viral headlines.

A few weeks ago, headlines went viral about protests at BHU against a newly appointed professor of Sanskrit who happened to be Muslim. This was of course immediately sucked into the “intolerance” narrative against BJP ruled India. The global liberal media did not lag behind. After all, these days anything perceived to be wrong with India is big news, even if it is vegetable prices.

And why not? After all, how can students in a learning environment possibly dictate that their professors should belong to a specific religion? What has the religion of the professor got to do with teaching a language?

So much of the left and the right weighed in on this story, most sensible people inclined to condemn the protesting students for their “bigotry.” Some celebrity journalists went a step further, putting the students on the kangaroo court of cable news though not letting them speak and hammering them on air.

Read: How the BHU students were demonised and the ones who refused to be ‘secularised’ unfairly called ‘bigots’

Slowly, but surely, a second narrative began to emerge. The students insisted that they had absolutely nothing against a Muslim teaching Sanskrit or any other language. It just so turns out that the Sanskrit Vidya Dharma Vigyan (SVDV) department to which Feroz Khan had been appointed, is a rather unique institution at BHU, which teaches Hindu Shastras and Hindu rituals.

This obviously has to do with the special history of BHU, conceived by Mahamana Madan Mohan Malviya as a centre for both secular and religious education. The appointment of a Muslim to teach Hindu Shastras in the Vedic tradition may, therefore, be seen as roughly equivalent to appointing a Muslim to work as a priest at a Hindu temple. It is not unreasonable to protest against this and doing so can hardly be considered a form of bigotry.

But few wanted to listen. The initial burst of viral headlines were simply too powerful.

However, the events of the last few days leave no doubt that the students had a legitimate point, which had nothing to do with religious fundamentalism.

Feroz Khan will continue to teach Sanskrit at BHU. He will just be teaching it in the Sanskrit department at the Faculty of Arts, where Sanskrit is taught in a secular fashion like any other language.

And the reaction of the protesting students? 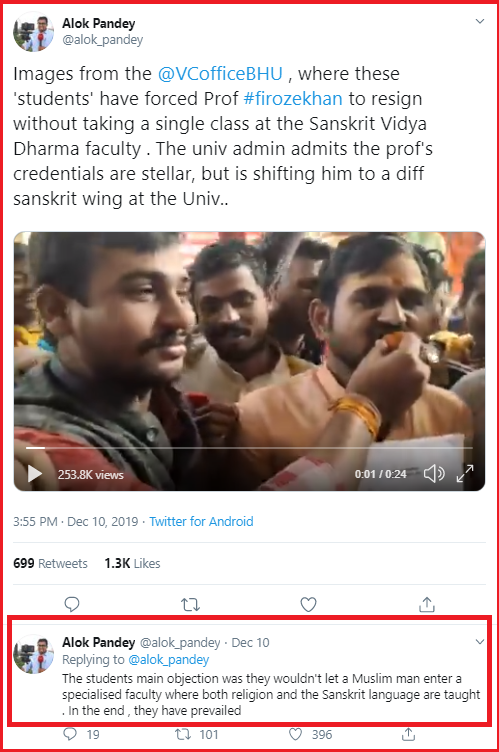 Even the NDTV reporter gets it now.

No student ever protested against a Muslim teaching Sanskrit at BHU. All they ever demanded was that a non-Hindu should not be teaching Hindu religion.

And yet, the impression was created (deliberately?) across India and across the world that these students were bigots, opposing a professor simply because he happened to be a Muslim.

The protesting BHU students deserve credit for making their point resolutely. For being unfazed before bullies from all over the world. The media elite, sometimes taking advantage of their relatively weak English speaking skills, tried to bury their narrative. But it was not to be.

Read: BHU protests: Students seek ‘Bheeksha’ to raise awareness for their cause, RSS reverses stand, Mahants come out in support

It can now be safely concluded that the BHU story should be a lesson in how not to cover news and why we should not jump to conclusions based on viral headlines. The whole thing was an internal matter of the university, relating to the unique history of the institution. Outsiders getting involved and shooting their mouths off without knowing the full story, did not help anybody.

A liberal may ask here: what about JNU? How come I want BHU protests to be an internal matter, but I had no qualms commenting on JNU? Well, it’s quite simple: JNU protests were about hostel fees, mess charges, etc. Common concerns that we can all understand and relate to. Concerns that are universal in nature. The BHU case simply wasn’t about any such thing. Most universities don’t have the unique history and traditions of BHU. The matter was far too specific to one department at one university.

Read: BHU students organise Rudhrabhishek as part of agitation against the appointment of non-Hindu to the faculty of theology

And now the protesting BHU students and the administration have reconciled all their differences in a manner that is fair to all. Prof. Feroz Khan will continue to teach Sanskrit at BHU and absolutely nobody questions his academic expertise. The students have happily called off their protest and will continue with their Hindu religious education at their department.

Seems everyone is a winner here. Except those of us who rushed to judge without making certain of the facts first.

Even pandering doesn’t get India Today a free pass: Here is why ‘liberals’ are today cancelling Rajdeep and Rahul Kanwal

'Liberals' are cancelling India Today, Rajdeep Sardesai and Rahul Kanwal over their coverage of the allegations against Shehla Rashid
Read more
Politics

Raut gives bizarre analogy trying to defend party after Azan row: Here are 4 things that he could have meant

Indonesian radical Muslims change words of Azan from ‘hurry to the prayer’ to ‘rise up for Jihad’: Here is what happened

A verse of the chant, which originally means “hurry to the prayer”, has been changed to “hayya alal jihad”, or “rise up for jihad” in Azan

Kangana Ranaut had commented on Twitter that the Shaheen Bagh Dadi was available on hire for appearing in protests. She had deleted her tweet later.

Indian man proposes to his Australian girlfriend during Ind vs Aus cricket match, here is what happened next

While India's performance has been below par, netizens found happiness in the unusual proposal that became the highlight of the match.
Read more
News Reports

The Indian Idol contestant revealed how women in her society are looked down upon if they try to excel in any field.
Read more
News Reports

Multiple videos of Yograj Singh, Yuvraj Singh's father, have gone viral on social media where he has been giving provocative speeches amid the ongoing farmer protests
Read more
News Reports

Shiv Sena is to bear the cost of the event and will also reward the contest winners.
Read more
News Reports

Instead of answering allegations, Shehla Rashid decides to run away from a live show, calls her father ‘greedy’

‘Jinnah did everything that is banned in Islam’: Images of alcoholic drink ‘Ginnah’ named after Pakistan founder Muhammad Ali Jinnah go viral

Even pandering doesn’t get India Today a free pass: Here is why ‘liberals’ are today cancelling Rajdeep and Rahul Kanwal

'Liberals' are cancelling India Today, Rajdeep Sardesai and Rahul Kanwal over their coverage of the allegations against Shehla Rashid
Read more
News Reports

Captain Amarinder Singh hits out at Arvind Kejriwal, Kejriwal hits back but ends up making no sense: Read what happened

Yogi Adityanath responds to Shiv Sena’s Sanjay Raut, busts claim about UP wanting to take film city away from Maharashtra

Raut gives bizarre analogy trying to defend party after Azan row: Here are 4 things that he could have meant

Zombie Mink: Hundreds of mink carcasses emerge from the burial trenches in Denmark after mass-culling exercise

Dubbed as Zombie mink, the farm mink that were culled to prevent Covid-19 outbreak have 'emerged from their graves' in Denmark.
Read more
News Reports

The Supreme Court said that building roads in a zig-zag way would reduce the speed of vehicles which would reduce accidents .
Read more
Read all the latest news