When the ‘Smart Troll’ forced Media houses to correct themselves

In a fine article in DNA, award-winning film director Vivek Agnihotri wrote a sort of rebuttal to Chetan Bhagat’s ludicrous “Anatomy of a Bhakt” piece, and also managed to do a fine study on the type of trolls on Social Media. As per him, there are mostly two kinds of trolls on social media:

1. Abusive, frustrated trolls whose idea is just to insult you

They go after anybody and everybody who is celebrated and abused them without much logic with them. Agnihotri believes these are not “trolls” but are losers, and must be ignored.

“Smart Trolls go after journalists, media handles, opinion-leaders, influencers, politicians, novelists, socio-political commentators and so on,” says Agnihotri. He further argues that these “Smart Trolls” are the ‘R & D of Social Media”, often doing what journalists are supposed to do. “They question your reports, your research, your analyses, your stands, your status and your integrity” he adds.

This piece by Agnihotri has caused double heart-burn in the clique of elite Journalists. Firstly, it glorifies at least a subsection of the lowly trolls which these journalists love to hate. Secondly, it rightly shows journalists in poor light, by saying that Smart Trolls have been doing their job. While the first cause of resentment is purely subjective, the second reason is justifiable.

Over the last 6 months, we have been diligently tracking Lies spread by Mainstream Media in the garb of news. For the 6 month period from January to June 2015, 82 lies were detected. Mind you these are what have been detected, and that too only in English media. And this is not the work of one individual, but it is a collective effort of collating and investigating various claims by media, done mostly by these “Smart Trolls”. Can Journalists deny these facts?

In fact, Smart Trolls have been so effective that far from journalists denying their claims, they have made many media houses accept that they were wrong and have made them subsequently change their stories or sometimes, delete them altogether. Following are few of such cases in the past 6 months, where media was forced to retract by “Smart Trolls”:

Firstpost wrote an article on how Baba Ramdev had built an empire on “blind faith” and was selling cures for “psychological, sexual, emotional” problems including “premature ejaculation”. The article fully relied on products found on a site called “www.swamibabaramdevmedicines.com”. The author, blind in his hate for Ramdev, did not bother to check or maybe deliberately omitted the fact that on every page of this site, it was mentioned that it had no connection with Baba Ramdev.

After our expose, Firstpost was forced to delete their article.

Sadhvi Prachi, who was repeatedly referred to as a BJP MP when she had never won an election, was quoted to have said that “ Vladimir Putin’s original name is Vaarahmihir Putr Singh, says Sadhvi Prachi” by India Today. The truth was this statement was made by a humour columnist in a satirical post on dailyo.in, which is ironically also owned by India Today group. It is unimaginable how a media house like India Today, could mistake a satirical comment in a post within its own group, and publish it as news. Eventually, India Today deleted the story, but not before Sadhvi Prachi was ridiculed on Social Media.

Also in March, and again India Today, claimed that people arrested in the Mumbai Church attack, belonged to Right Wing groups. It was only after @rupasubramanya (who was branded a troll by MSM on two occasions) pointed out that the men arrested were gamblers, did India Today correct the story. 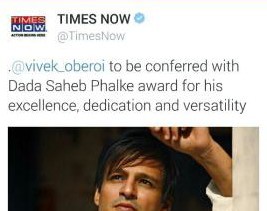 Paragon of Truth, Times Now’s twitter handle tweeted that Vivek Oberoi had been awarded the Dadasaheb Phalke Award.  Facts, however, were different. 2015’s Phalke award was already declared to Shashi Kapoor in March 2015. The award which Vivek had received was a similarly named award from a private body. Times Now had even managed to get a byte from Vivek on this story. Later that tweet too was deleted after “Smart Trolls” exposed Times Now on Twitter.

The Hindu ran an interview of Arun Jaitley, quoting him as saying “Saffron Bullies Cautioned,”. It gave an impression that Arun Jaitley has used the term “Saffron Bullying” in describing some elements. The introduction to the full transcript of the interview says that Jaitley spoke about the “vexatious saffron bullying by some of the Central Ministers”. But when we actually see the transcript, it is clear that Jaitley never used the above phrase. In fact, this term “Saffron Bullying” was used by the interviewer herself in her 3rd question. Attributing this term to Jaitley is incorrect. There was outrage on Social media, again thanks to “Smart Trolls”, after which The Hindu printed a correction clarifying this issue.

In another case, Scroll.in and Firstpost claimed Modi had planned to rename Delhi, when actually, was the plan of an NGO, approved by Delhi State Government and late by Central Government, done in order to help in getting a UNESCO Heritage City Tag, which would boost Tourism. We wrote a separate post on this and eventually Scroll.in had to surreptitiously change their report.

Later in May, Scroll.in and Quartz, spun a landmark law to reduce child labour, as “Government set to send millions of children back into exploitative labour“. We did a detailed take-down on this lie and eventually, the story was corrected.

And these are only some of the times Media had to correct itself. So, it is no surprise that Mainstream Media Journalists love to call anyone who disagrees with them as “Trolls”. The next step is to brand all of these trolls as abusive and lowly, thereby removing their credibility. But as Director Agnihotri’s post rightly points out, Smart Trolls are “watchdogs”. They are the watchdogs of an unregulated, biased and propaganda driven Mainstream Media. Social Media is the big leveller here and the game has just begun.