Can Economic Times be trusted with UP elections coverage? Asks Social Media 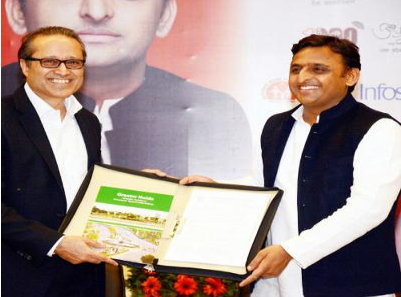 For around a month now, social media users have been pointing out the supposed ‘cheerleading’ of Akhilesh Yadav led Uttar Pradesh government being done by the Economic Times. Even though, as the name suggests, the newspaper’s chief focus is on the financial spectrum, there is still a sizable amount of political content in every edition of the newspaper, where Akhilesh Yadav and his government have been finding a positive mention regularly.

Is EconomicTimes is official partner of Akhilesh Yadav’s UP election campaign.? pic.twitter.com/10oocXJhwn

Look like @EconomicTimes has kick started the campaign for Akhilesh Yadav.

Entire political section is dedicated on his positive coverage pic.twitter.com/aPRicsmUDe

Naturally many wondered why Economic Times had found so much love for Akhilesh, and soon people came out with a theory linking the two:

Although this is just a conspiracy theory, it indeed is a fact that Akhilesh Yadav led state government had allotted 68 acres of land in Greater Noida for setting up of the Bennett University back in December 2014. It was by no means a hush-hush affair as Times Group MD Vineet Jain in a ceremony had presented Akhilesh with university documents and also thanked him for facilitating the allotment of land in a short period of time. This university falls under the Bennett Coleman and Company Limited, which is the umbrella organisation owning the Times Group.

The public association of Akhilesh with the university and Times Group didn’t end here, as four months later in a ceremony in Lucknow, he laid the foundation stone for the university and in August 2016 also inaugurated the University at his official residence.

Thanks to this association between the Times Group and Akhilesh, people have now started to wonder if this relationship also extends to the group’s reporting, and whether this was the reason why Akhilesh has been so royally depicted in ET reports. Times Group feels obliged to help a Chief Minister who helped them?