Will Barkha Dutt call this guy who raked up personal life of Vasundhara Raje a troll?

The internet “troll” has wreaked havoc with mainstream media narrative over the last few years. These “trolls” seem to be everywhere and they have an irritating habit of pulling out inconvenient past tweets, digging up facts that should rather be forgotten. Worse, they are able to build communities in organic fashion, building an invisible yet extremely effective network that exposes lies almost as quickly as the mainstream media is able to manufacture them.

And the professional  propagandists don’t like it one bit that they are being fought to a draw by little more than hobbyists taking to the keyboard in their spare time. You can’t purchase passion.

No wonder then that the community of news-traders sees the “internet troll” as enemy no. 1.

One of the standard ways that the mainstream media has used to malign the social media is claiming that the internet troll is “sexist” and participates in online abuse against women. The outrage against “online abuse” is of course narrowly tailored against the supporters of one political party.

Today the Hindustan Times has taken another step in this direction with its campaign of “Let’s Talk About Trolls”. It seems that the first person to be featured in this campaign (not as a troll, but as a “victim”, in case you were wondering) is controversial journalist Ms. Barkha Dutt.

Here is a banner that HT has used to inaugurate their campaign : 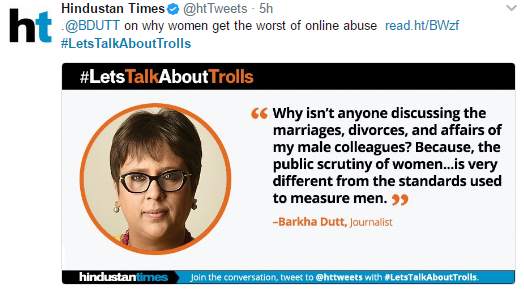 Ms. Dutt has good reason to be angry with social media, what with some “trolls” giving her trouble this week about her new media venture and the views of some people linked to it.

But let’s take Ms. Dutt’s question (in the image above) at face value.

Good question Barkha! You know, I happened to be reading a certain troll outlet called the New York Times earlier this morning. This article is written by a certain erudite, possibly aristocratic individual by the name of Aatish Taseer, who certainly appears to fetishize “liberal values”.

Oh look how wonderful. What a sweet liberal discussion on Ms. Raje apparently having a Muslim boyfriend and being a single mother and smoking and drinking!

Did someone just complain about trolls bringing up  the marriages, divorces and affairs of women in the public sphere? Let Ms. Barkha Dutt continue :

Because what you see in the pages of the New York Times is not sexism. It’s not trolling. It is just respectable liberals doing what respectable liberals always do : evaluating professional women in the public sphere through the boyfriends they may or may not have had. Linking sex life and personal life of a woman to her politics and morality. But hey, this is done with impeccable grammar.

Liberals, thy name is hypocrisy.